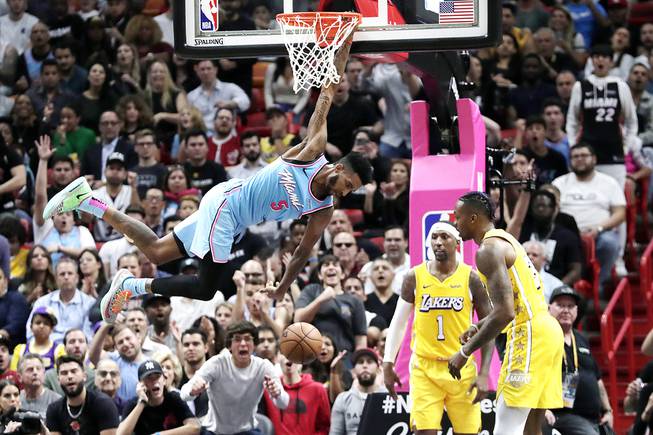 MIAMI—No matter what Derrick Jones Jr. comes up with in his second career NBA Dunk Contest February 15 in Chicago, he doesn’t foresee it making his list of all-time favorite slams.

The Miami Heat swingman says most all his favorite dunks have been concentrated during one specific time and place—from mid-2015 to early 2016 at UNLV’s Mendenhall Center—when he would mess around after practice with his Runnin’ Rebels teammates.

“It was just when I had my young legs,” the 22-year-old Jones says with a grin after a practice at the Heat’s American Airlines Arena. “It was when I was really jumping.”

If pressed to pick one dunk, the 6-foot-6, 210-pound Jones might go with the time he leapt from just inside the free-throw line, laced the ball between his legs and finished ferociously at the rim with one hand. He remembers teammates—including fellow future NBA players Stephen Zimmerman and Patrick McCaw—going crazy in celebration.

Jones spent a relatively short time in Las Vegas, not even playing one whole season for the Rebels after an ACT testing service canceled his score and left him ineligible for the final three games of the year. It was tumultuous in other ways, too, with coach Dave Rice getting fired midseason, but Jones says he still has overwhelmingly positive memories of his time in Las Vegas.

UNLV forward Derrick Jones Jr. (1) elevates for a dunk off of fast break over San Jose State at the Thomas & Mack Center on Wednesday, February 10, 2016.

“I loved every moment I was at the school,” Jones says. “It was just the relationships I built with the guys. The team we had that year was special. We had a couple bumps and bruises in the middle of our road, but I miss that team. We had a whole lot of characters on that team.”

Jones sees UNLV as the foundation for his professional success, which appears to have only begun. He says he’s not as good a dunker now as he used to be, but he’s fine with that because he’s improved most every other aspect of his game.

Jones is in the midst a breakout year in his third season with the Heat, averaging nine points and four rebounds per game and excelling in the toughest defensive assignments for a team that looks like an upstart championship contender.

Jones’ final contracted year with the Heat was supposed to determine whether the franchise saw him as a long-term fit. Now, that’s not even a question, with speculation instead centered on whether Miami can afford to retain him.

Jones has played himself beyond the $1.5 million salary he’s earning this season, improving both his defense and his shooting. Jones knocked down a career-high three 3-pointers during the Heat’s final home game before the All-Star break, a blowout win over the 76ers. He did it again two nights later en route to a career-high 25 points in a road loss to the LA Clippers.

“This year has been everything,” Jones says. “It’s not only my contract year, but this is the year I want to prove I belong. I want to be here. I don’t want to go anywhere. I want to have a long career in Miami.”

Recent signs indicate that the Heat might be thinking the same thing. Miami was active during the trade deadline—landing former NBA Finals MVP Andre Iguodala and engaging in talks to acquire veteran Danilo Gallinari—but reports surfaced that Heat management wasn’t going to include Jones in a deal.

He’s gone from undrafted to untouchable in four years, a rarity in the NBA. “He’s becoming increasingly more important for us,” Heat coach Erik Spoelstra told the South Florida Sun-Sentinel. “His teammates know that; his coaches know that. He just has to keep on working.”

Jones sees that imperative as fair, citing what’s widely known in NBA circles as “Heat culture.” Miami is known for its highly demanding workloads—and a zero-tolerance policy for those who fall short of fulfilling them.

Jones says that stringency was exactly what he needed after drifting between the NBA and developmental league during his first two pro seasons with the Phoenix Suns.

“In Phoenix, I was able to be a kid, to use that kid card a lot,” Jones says. “Here, there’s none of that, [and] I love it. They hold me to a higher standard. We all want to be great, and we’re going to hold each other accountable until we all become great. Whenever we see someone slipping up, we correct it. We let them know what they should be doing [and] what they shouldn’t be doing. Just to have teammates and people like that in your corner caring about you, that makes me play harder.”

If Jones’ time in Phoenix is remembered for anything, it’s his participation in the 2017 Dunk Contest in New Orleans. He primarily used variations of dunks he perfected at UNLV, including a windmill after catching the ball off the side of the backboard.

There’s no telling what Jones will do in the 2020 Dunk Contest, which many fans consider the highlight of All-Star weekend. He says it will be a spur-of-the-moment thing.

Still, he has some unfinished business to take care of. He made the finals three years ago but wound up the runner-up, to Indiana’s Glenn Robinson III. “I always told my dad, once I started dunking I was going to win a Dunk Contest in the NBA,” he says.