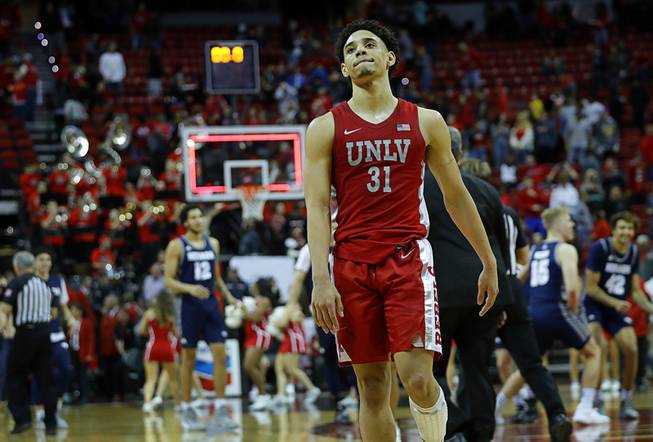 Can the Rebels make a run?

UNLV had plenty of chances to score in overtime against UNR on Wednesday, but unfortunately for the Rebels most of those opportunities came from the 3-point line or the free-throw line, and their inability to make open shots doomed them in an 82-79 loss.

The most visible miss came from sophomore guard Bryce Hamilton, who lined up an open 3-pointer with 10 seconds to play in OT that would have given UNLV the lead. The lefty’s attempt missed, and the Rebels dropped to 12-14 on the season (7-6 in Mountain West play).

Hamilton, who is UNLV’s leading scorer (21.7 points per game in conference play), said the UNR defense dictated his decision to pull up for 3 instead of attacking the paint.

“I saw that they went under the screen,” Hamilton said. “The paint was a little packed so I decided to shoot the 3.”

Hamilton finished with a team-high 23 points while shooting 9-of-25 and 1-of-7 from deep.

The two opposing scorers didn’t exactly engage in a duel, as Harris shot 9-of-21 and 0-of-8 from long distance, but they went toe to toe in the final minutes. With the game tied and less than a minute to play, Harris drove through the UNLV defense for a layup to put UNR ahead. On the ensuing possession, Hamilton drove and converted inside to tie the game with 27 seconds to play.

Harris had a chance to end the game in regulation as UNR held for the final shot, but his last-second drive was blocked by sophomore guard Marvin Coleman, sending the game to OT.

Amauri Hardy hit a big 3-pointer from the corner to tie the game at 79-79 with 1:49 to play in overtime, but Harris answered right back by nailing a mid-range jumper to give UNR the lead with 1:21 left. Hamilton missed a long jumper, but a defensive stop got the Rebels another chance with 20 seconds to play.

As he did in UNLV’s last-second win over Fresno State on Saturday, head coach T.J. Otzelberger opted not to call timeout to organize the Rebels’ final possession. Hamilton took a handoff, read the defense and put up a 3 that bounced off the rim.

UNR secured the rebound, Harris hit 1-of-2 free throws with three seconds on the clock, and Elijah Mitrou-Long’s desperation heave from halfcourt came up empty.

Though UNLV did an admirable job on Harris at times, the seasoned scorer got the better of the Rebels.

“He’s an unbelievable player,” Coleman said. “We’ve just got to tip our hat to him.”

UNLV shot 2-of-11 in overtime, but the game might not have gotten that far if the Rebels had been dialed in on their free throws. They came into the game making 72.3 percent from the stripe but hit an abysmal 12-of-25 at home against their biggest rivals.

Hardy took UNLV’s only two free-throw attempts in overtime and missed both with the game tied 76-76 at the 3:19 mark.

Coleman, who shot 2-of-10 from the field without attempting a free throw, was particularly stung by his team’s performance from the line.

“You lose a close game — we lost by 3 — and we left 13 points at the free-throw line,” Coleman said. “Usually we shoot well from the free-throw line. We’ve got to get in the gym, make sure we’re locked in on what we need to focus on.”

UNR has now won six straight games against UNLV. Coleman, a hometown product who played his high-school ball at Foothill, said the loss will linger.

“It just hurts to lose, period,” he said. “But lose on our home court — this game meant a lot to us, a lot to me, my teammates, our coaches, our school, university, everybody.”

UNLV is now in sixth place in the Mountain West standings, a game behind Colorado State (8-5). The top five seeds are awarded a bye in the first round of next month’s conference tournament, while the six through 11 seeds face off in first-round play-in games.

Rebels fall to UNR in overtime –