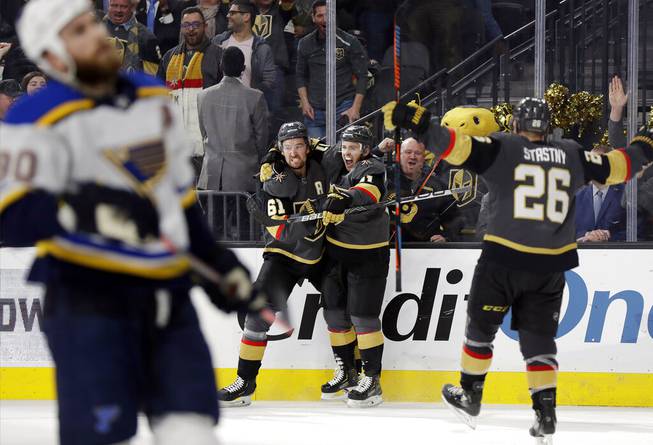 Jonathan Marchessault sure thought it was a penalty shot. That was clear watching him on the ice, arguing his case to officials after a Vegas timeout, and hearing his post-game comments.

Marchessault may not have been granted a penalty shot on an overtime hooking call by Jaden Schwartz — remember he’s the only Golden Knight to end a game in such fashion — but he did get the overtime winner. He scored at the midpoint of the extra frame, putting an exclamation point on both the Golden Knights’ performance on the power play, as well as the 6-5 win over the St. Louis Blues on Thursday at T-Mobile Arena.

The Golden Knights entered the night 3-for-26 under coach Peter DeBoer on the power play, a putrid 11.5% success rate that would rank at the bottom of the NHL if  extended over a full season. Thursday they converted on four of their five chances, the second time in team history they scored four power-play goals.

It was gratifying for a group that had been struggling. They tried shaking things up, changing the lines and even flipping which side of the ice players are on to try to get it going. The emphasis against St. Louis was getting the puck to the net and seeing what happens. That’s the case often, but it worked on Thursday — three of the four power-play goals involved a rebound or a deflection.

“It doesn’t always come at once, but being able to give teams different looks I think in the long run will pay off,” forward Max Pacioretty said. “Tonight, we felt like everything was clicking.”

It was a banner offensive night for most of the Golden Knights’ best forwards. Marchessault scored twice, as did Max Pacioretty. Mark Stone had a season-high four assists, while William Karlsson had two.

The win is crucial, considering the state of the Pacific Division, but it doesn’t erase what has been a troubling trend in the defensive end. The Golden Knights have allowed at least four goals in three straight games and have not had a home game in 2020 where they have given up fewer than three.

That’s not something to easily paper over. The Golden Knights, by all accounts, should have won this game walking away. They had 52 shots on goal to the Blues’ 24 and yet only had one extra goal. The Blues generated just 2.2 expected goals, according to Natural Stat Trick, yet converted on more than double that.

That’s on the defense. In their own zone the Golden Knights showed plenty of lapses on Thursday, including three St. Louis goals where the shooter was all alone with no one around.