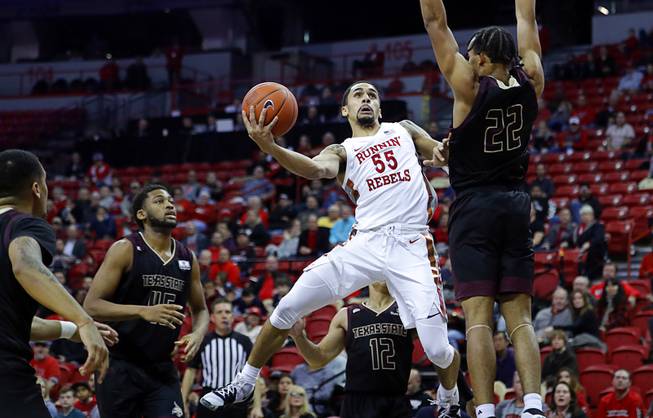 It’s not like UNLV needed any extra motivation for Saturday’s showdown with undefeated San Diego State, but a pregame ceremony at Viejas Arena seemed to spark something in the Rebels.

SDSU had clinched the Mountain West regular-season title by virtue of a win at Boise State on Feb. 16, and since Saturday’s game against UNLV was the Aztecs’ first home tilt since then, they decided to commemorate the championship by raising a banner to the rafters.

The banner ceremony was short enough, but it was done after the starting lineups were introduced. That meant UNLV players had to stand on the sideline as San Diego State celebrated its accomplishment.

Some Rebels were visibly frustrated by the delay. Some used it for motivation.

“We took it in a disrespectful way,” the fifth-year senior said after scoring a team-high 19 points. “But at the end of the day they can do whatever they want. It’s their home court. When it comes to me personally, I didn’t really care about that because I focus on my guys and my team and just winning.”

T.J. Otzelberger flashed the faintest of grins when asked about the timing of the banner celebration.

“It’s a credit to [San Diego State],” Otzelberger said. “They’ve had a tremendous year, a historic year. Is there a chance that it got talked about in our locker room pregame speech? Potentially. But I seem to forget what we said.”

Did being forced to wait through a banner-raising really make the Rebels play better when the game actually started? That’s impossible to know. And San Diego State had to do it sometime, so some opponent was going to have to stand there and take it. But teams are always looking to create a galvanizing “us against them” mentality, and for these Rebels, the banner seemed to do the trick.

Amauri Hardy, who finished with 17 points, summed up the Rebels’ perspective.