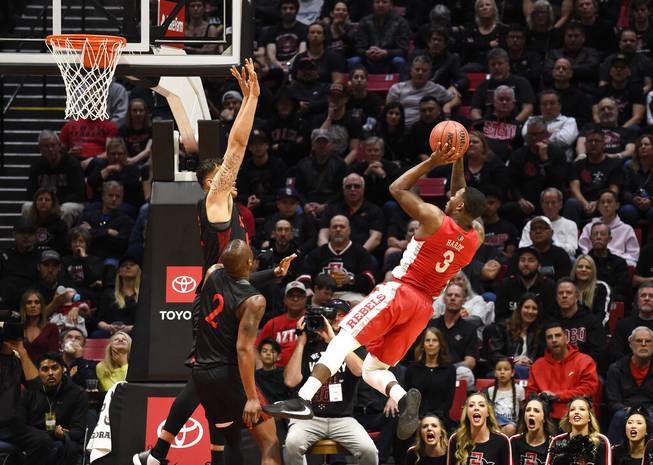 It was UNLV’s first victory over a top-five opponent since beating No. 3 Arizona at the Thomas & Mack Center in 2014, and it was earned.

The Rebels didn’t do it by conventional means. They played funky lineups, they made difficult shots, they drew odd fouls and they reached deep into their bag of tricks down the stretch. It was a game won more with want-to than with execution, and that was exactly the way Otzelberger drew it up.

“It was gritty,” the Rebels’ first-year coach said outside the raucous visitor’s locker room at Viejas Arena. “Gritty, gutty, resilient.”

UNLV started hot, with guards Amauri Hardy, Elijah Mitrou-Long and Bryce Hamilton combining for 30 first-half points to power the Rebels to a somewhat stunning 37-25 lead at the break.

Otzelberger played four guards for most of the game, and even shifted to some five-guard looks in the second half as UNLV expended maximum energy to cover the court defensively against San Diego State’s shooters. The Rebels pushed their lead as high as 14 points on four separate occasions, but SDSU stayed close enough to make a run.

Mbacke Diong scored on a putback to make it a 54-39 game with 10:44 remaining, and then San Diego State’s elite defense clamped down: UNLV managed just one more field goal the rest of the way as the Aztecs staged a furious comeback.

Mitrou-Long sank a pair of free throws to make it a four-point margin, and Flynn came back with a quick 3-pointer to make it 64-63 with 14 seconds on the clock.

That’s when the Rebels got really tricky.

UNLV had some trouble inbounding against SDSU’s full-court press on previous possessions, so instead of forcing a difficult pass, Mitrou-Long bounced the ball off an unsuspecting defender’s back; Mitrou-Long then stepped across the baseline, collected the ball and raced upcourt. SDSU forward Matt Mitchell, the defender who got used as Mitrou-Long’s prop on the inbound pass, chased down the play from behind and fouled Mitrou-Long.

The fifth-year senior stepped to the line with 11.5 seconds to play and made both free throws to extend the Rebels’ lead to 66-63.

Mitrou-Long said it was the first time he had ever tried the old “inbound it to yourself off the defender’s back” trick, but Otzelberger had complete confidence in him to make a smart play.

“He asked as he came out of the timeout and said, ‘There’s no timeouts left, so should I throw it long if nobody’s open?’ I said, ‘Depending if there’s a guy on the ball or off the ball, I trust you to make that read.’ Just a really smart play by a fifth-year senior at a really key point in the game.”

Flynn missed a 3-pointer with six seconds left and UNLV point guard Marvin Coleman picked his way through traffic to get the rebound. Coleman’s momentum carried him out of bounds along the baseline, but not before he turned and smartly fired the ball off a San Diego State player to retain possession for UNLV with 3.3 seconds left.

With neither team having any timeouts remaining, the Rebels launched the ensuing inbound pass all the way into the frontcourt. Mitchell came up with a steal, but his desperation heave to tie the game missed at the buzzer.

The final horn set off a jubilant celebration on the UNLV sideline, and after going through the handshake line with SDSU players the Rebels whooped it up as they ran up the tunnel and to the locker room.

Mitrou-Long finished with 19 points and three steals in 32 minutes off the bench. Hardy scored 17. Hamilton posted 11 points and 10 rebounds. Coleman tallied nine points, five rebounds and two steals. But more than any statistics, the Rebels relied on teamwork and desire to secure one of the program’s best wins since the glory days of the early 1990s.

Hardy, a junior who has been with the program through good times and bad, said the Rebels can relish the win but emphasized the need to build on it.

Mitrou-Long said a performance like Saturday’s could propel UNLV to big things, but only if the Rebels play with the same kind of attitude that carried them to victory against one of the country’s best teams.

“It’s a confidence booster. It gives us hope. Yeah, it’s a win. The veteran side of me talking, we’re going to cherish this moment but we’re going to move on because we haven’t really done anything yet.”