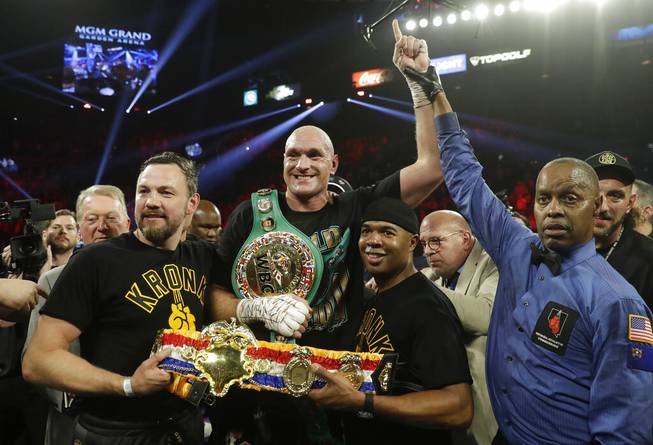 The second fight between Deontay Wilder and Tyson Fury turned out to be every bit the spectacle everyone expected Saturday night at MGM Grand Garden Arena, just not quite the evenly-matched war that was advertised.

The underdog Fury eviscerated Wilder, scoring two official knockdowns through six rounds and potentially shattering the now-former champion’s eardrum. Having seen enough, Wilder’s corner threw in the towel to give Fury a TKO victory at 1:37 of the seventh round.

“Why’d you do that,” Wilder yelled at his corner right afterwards.

The answer was all too obvious. Blood was pouring out of Wilder’s ear, and he couldn’t maintain any balance.

Every Fury punch appeared to be taking its toll — and there were many. Fury jabbed less than normal, coming straight at Wilder from the beginning and pelting him with hooks and big right hands.

“The king has returned,” Fury said while still in the ring before leading a rendition of Don McLean’s “American Pie” with his sizable assembled fan base.

Fury, therefore, exited the MGM with as much panache as he entered it. His entrance is sure to go down in boxing history as one of the most elaborate, as he was wheeled in on a throne while dressed as a king.

Wilder followed, coming out in a full body suit and a haze of smoke behind a rap performance from D Smoke. Wilder’s arrival was the only thing that went according to plan for him.

Fury blitzed him from the moment the bell rang, and scored his first knockdown in the second round with a straight right.

“He showed the heart of a champion,” Fury said. “I hit him with a clean right hand and dropped it and he got right back up and kept battling. He will be back. He will be champion again.”

Wilder slipped on the canvas two other times, but Fury’s final knockdown came in the sixth round when he connected with a vicious body shot.

Some fans heckled Wilder’s corner to call the fight off right then. They only needed to wait a couple more minutes to get their wish.

“It definitely wasn’t my night,” Wilder said. “My coaches threw in the towel. I was ready to go more.”

“I wish my corner would have let me go out on my shield. I’m a warrior. That’s what I do.”

Stay tuned to lasvegassun.com for more coverage of Wilder vs. Fury II later.

Action is moving in the other direction at the sports book, however, as money is piling up against Fury and on opponent Deontay Wilder. A fight that was once a pick’em now sits with odds as high as minus-130 (risking $1.30 to win $1) in favor of Wilder.

Opinions on the heavyweight championship rematch are all over the place, which feels refreshing for a Las Vegas boxing night. Not only is Wilder vs. Fury II the first mega heavyweight matchup in Las Vegas in years, but it also feels like the first big fight in a long time that could truly go either way.

Fury is the more seasoned boxer; Wilder is the harder hitter. Conventional wisdom, therefore, indicates that Wilder is most likely to win via knockout while Fury needs the fight to get to decision.

Both fighters have railed against that perception, however, and insisted they can win in a number ways. The build-up to the fight has been seemingly endless since the two first faced off in a split draw in December 2018 at Staples Center in Los Angeles, but it’s finally coming to an end.

Within a few hours, we’ll find out who was right about a heavyweight pairing that has captivated the boxing world in a way few bouts have since 1990s.

The main event is expected to get under way sometime between 8:45-9:15 Pacific time. Stay tuned to lasvegassun.com for coverage throughout the night.