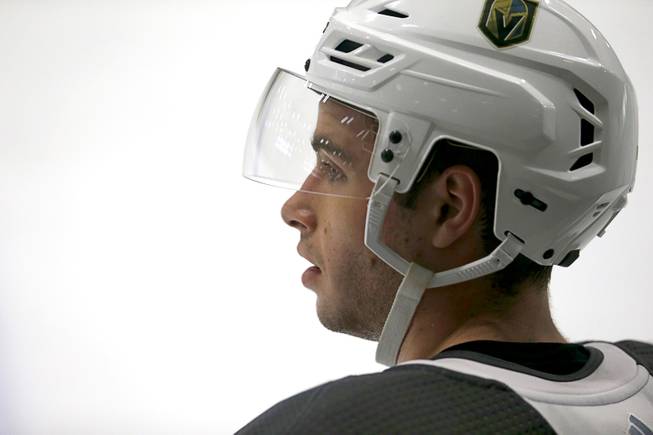 Ken Quinney couldn’t believe what he was seeing as he sat at T-Mobile Arena Saturday night. He reminisced back to one of his first exhibition hockey games in Canada, estimating an attendance of maybe 3,000 people, just about the whole town.

That felt a world removed from where he was in Section 8, Row Y as he listened to an announcement that his son, Gage Quinney, was moments away from becoming the first Nevada-born player to appear in an NHL game. Ken watched as his son skated the customary solo lap before his first game and then saw a 200-foot version of Gage projected on the ice, announced as a starter.

It was the first time in 22 years that a member of the Quinney family played a meaningful hockey game in Las Vegas. Ken spent five seasons in the 1990s with the Las Vegas Thunder of the now-defunct International Hockey League. Gage, meanwhile, registered a shot on goal in 9:09 of ice time with the Vegas Golden Knights as they defeated the Florida Panthers 5-3 for a fifth straight win in his NHL debut.

“Playing in your hometown, where you grew up, with the Golden Knights and how popular they are and how fantastic of a first couple years they’ve had and everything, it makes me so proud of him and it’s got to be a dream for him,” Ken Quinney said.

Gage was born in 1995 when Ken was on the Thunder, back when they played at the Thomas & Mack Center. Hockey brought the Quinney family to Las Vegas, but the love for the city kept them here.

Gage was born in Las Vegas, grew up in the valley and played his youth hockey here before moving to Prince Albert, Saskatchewan, then Kelowna, British Columbia, for major junior hockey.

He went undrafted, then signed with Pittsburgh after his junior career was over. He worked his way up through the lower levels of the minor leagues, then to the American Hockey League, but never cracked the Penguins’ big club.

Quinney signed with the Golden Knights in 2018 for a homecoming. But he didn’t make the NHL with Vegas either, not at least in his first season with the organization. This season, on the last year of his entry-level deal, he finally broke through.

Gage had played in 42 games with the Chicago Wolves of the AHL before getting the call-up on Friday. He sent his dad a text message — not a call as Ken pointed out — with the news and asked him to keep it quiet.

With today’s social-media world, however, it took only about five minutes for word to spread and send Ken’s phone blowing up with messages.

Gage arrived in Las Vegas for practice on Saturday and skated on the fourth line in the win over the Panthers.

“I think during the national anthem is that I got hit by that I was playing here,” Gage said. “Just to play my first NHL game, yet alone in the hometown. Just really excited.”

Nicolas Roy left Saturday’s game with an injury and did not return, further cutting into Vegas’ dwindling depth. They’re down to 11 healthy forwards with Alex Tuch and Cody Glass nursing injuries and having traded away Cody Eakin on Friday.

Gage had a solid debut, which included drawing two penalties to help the Golden Knights go on the power play. He skated between Tomas Nosek and Ryan Reaves, and though he didn’t factor into the scoring, he was on the ice for Nosek’s goal, Vegas’ first of the game.

“It’s always nice to be able to play your first game and share it with your family,” said forward Reilly Smith, who scored two goals including the game-winner. “I know it’s tough because I remember my first game, but you just try and relax and that’s what most people told him. Just have fun with it. You only get to do it once, so relish it.”

Gage said he settled down at the puck drop. The cheering section around his father was more anxious.

Ken wasn’t a former Thunder winger on Saturday; he was Gage’s dad. And Gage’s dad couldn’t have been happier.

“I know being born in Nevada and having that chance to play for a pro team that I never thought would probably ever happen, I’m proud of him and nervous,” Ken Quinney said. “I think it was a good first game and hopefully he just keeps getting stronger.”