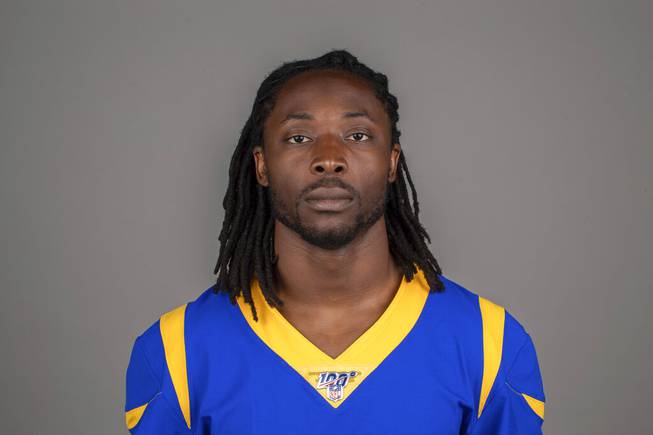 This is a 2019 file photo showing Cory Littleton of the Los Angeles Rams NFL football team. The Las Vegas Raiders have agreed with free agent linebacker Cory Littleton on a three-year contract. A person familiar with the contract says the sides came to agreement on the deal to give the Raiders a major upgrade at linebacker. The person spoke on condition of anonymity because the contract can’t be signed until the start of the new league year on Wednesday, March 18, 2020.

When the Raiders came to an agreement with free-agent linebacker Cory Littleton on Tuesday, it ended months of speculation linking the former Rams star to Las Vegas. Just about everyone seemed to assume the Raiders would make a top offer for Littleton, and general manager Mike Mayock and coach Jon Gruden came through with a 3-year, $36-million pact to lock him down.

Why were the Raiders so keen on Littleton, to the point that the signing seemed like a foregone conclusion? It’s because Littleton is the perfect fit at the perfect time for the Las Vegas defense.

Last year, the Raiders were abysmal when it came to defending the middle of the field. The team’s group of no-name linebackers allowed opposing tight ends and running backs to run wide open between the hash marks, racking up big yardage on high-percentage passing plays.

Littleton, 26, instantly gives the Raiders an athletic defender who can not only match up with those pass catchers at the second level, he can win those matchups.

He played all over the field for the Rams last year and made 134 tackles, but his most impressive skill by far is his ability to cover the intermediate area of the field. Whether it’s running backs, tight ends or wide receivers, Littleton is hardly ever at a disadvantage in the middle of the action.

When it comes to running backs who present as pass-catching threats, no one in the league is more dangerous than Carolina Panthers All-Pro Christian McCaffrey. When the Rams played at Carolina in Week 1 last year, it was Littleton who was often tasked with picking up McCaffrey when he split out of the backfield.

A sampling of Littleton in coverage against the league’s premier pass-catching back:

On these plays, you can see what Littleton brings to the table. There is a lot of open space in the middle there; he’s on an island with a super-shifty route runner. He squares up with McCaffrey on a pair of option routes, and though McCaffrey throws his best juke moves at him, Littleton doesn’t bite. He sticks close to McCaffrey, and though the passes are complete, Littleton’s coverage is tight enough that he can make the tackle immediately and extinguish any yards after catch.

McCaffrey usually feasts when he’s isolated on an opposing linebacker with space to work with on both sides. Littleton holds him to minimal gains. Playing in the AFC West, which features pass-catching backs like the Chargers’ Austin Ekeler and the Chiefs’ Damien Williams, Littleton’s ability to cover will come in handy.

Speaking of AFC West opponents, the biggest mismatch in the entire division might be Kansas City tight end Travis Kelce. There are few good options for opponents when game-planning to defend the Chiefs, and it’s because Kelce is nearly impossible to cover with one player. Littleton gives the Raiders someone who should at least be able to make Kelce work for it.

With the Rams, Littleton had to match up against San Francisco’s George Kittle twice a year, so he’s got experience sticking with super-charged tight ends. The Rams mostly employed zone coverage against San Francisco, allowing Kittle to run free off the line, but there were a couple plays where Littleton took him 1-on-1:

On the first play, Littleton picks up Kittle coming across the middle in the red zone. Littleton gets physical with him and makes him work all the way across the field, and then back toward the ball in order to finally make a spectacular touchdown catch. Littleton technically gets beat for a touchdown on the play, but it’s really good defense — few players can do what Kittle does there.

On the second play, Littleton runs with Kittle on a stem route to the back of the end zone. Littleton has the quickness to turn and stay close, and the awareness to get his hands up at the last second to break up a sure touchdown. It’s impressive work against the most complete tight end in the game.

Last year, the Raiders allowed opposing tight ends to catch 73 passes for 877 yards and 10 touchdowns; basically, every tight end turned into Kittle or Kelce when they played the Raiders’ defense. Littleton should help stifle those numbers.

Littleton’s speed and ability to change direction allows him to play in space without being a liability in coverage, especially against the type of crossing routes that now dominate modern playbooks.

Against New Orleans last year, the Saints ran several plays that tried to put Littleton in the unfavorable position of trailing a receiver across the middle. He handled himself quite well:

On the first play, Littleton picks up a tight end who has split wide and follows him all the way across the middle of the field. There is no separation at all, so the tight end reverses direction and breaks off the play; Littleton sticks to him and easily breaks up the pass. He’s just faster and more athletic than the player he’s covering.

Littleton does an even more impressive job on the second play. He’s split out wide in man coverage against Michael Thomas, arguably the NFL’s best wide receiver, and Drew Brees obviously intends to throw in that direction before the snap. But Littleton runs with Thomas step for step all the way across the field; instead of Thomas pulling away for an easy pitch-and-catch (and god knows how many yards after the catch), it’s a harmless 4-yard gain.

Littleton is also an elite defender when asked to drop into zone coverage. The Rams liked to put him in the middle of the field and let him read the quarterback; Littleton has good instincts, and when he makes a read he has the acceleration to instantly teleport to the spot.

Some of his best plays came in zone coverage, jumping intermediate routes:

On the first play, the slot receiver runs a hook and the San Francisco quarterback stares it down from the snap. Littleton starts out over the center but follows the QB’s eyes and bursts in front of the route to break up the pass; it should have been an interception.

On the second play, Littleton starts out over the center and drops straight back, initially trying to contain McCaffrey as he releases out of the backfield. But once Littleton sees that the QB is looking to hit his tight end up the right seam, Littleton breaks on the pass and picks it off at the numbers. That’s a lot of ground covered in a short amount of time.

Littleton has his weaknesses. He’s not especially stout against the run, and he’s better covering laterally than he is on vertical routes. But the things he can do — defend running backs, cover tight ends and make plays in the most vulnerable area of the field — make him the most important addition of the offseason for Las Vegas.