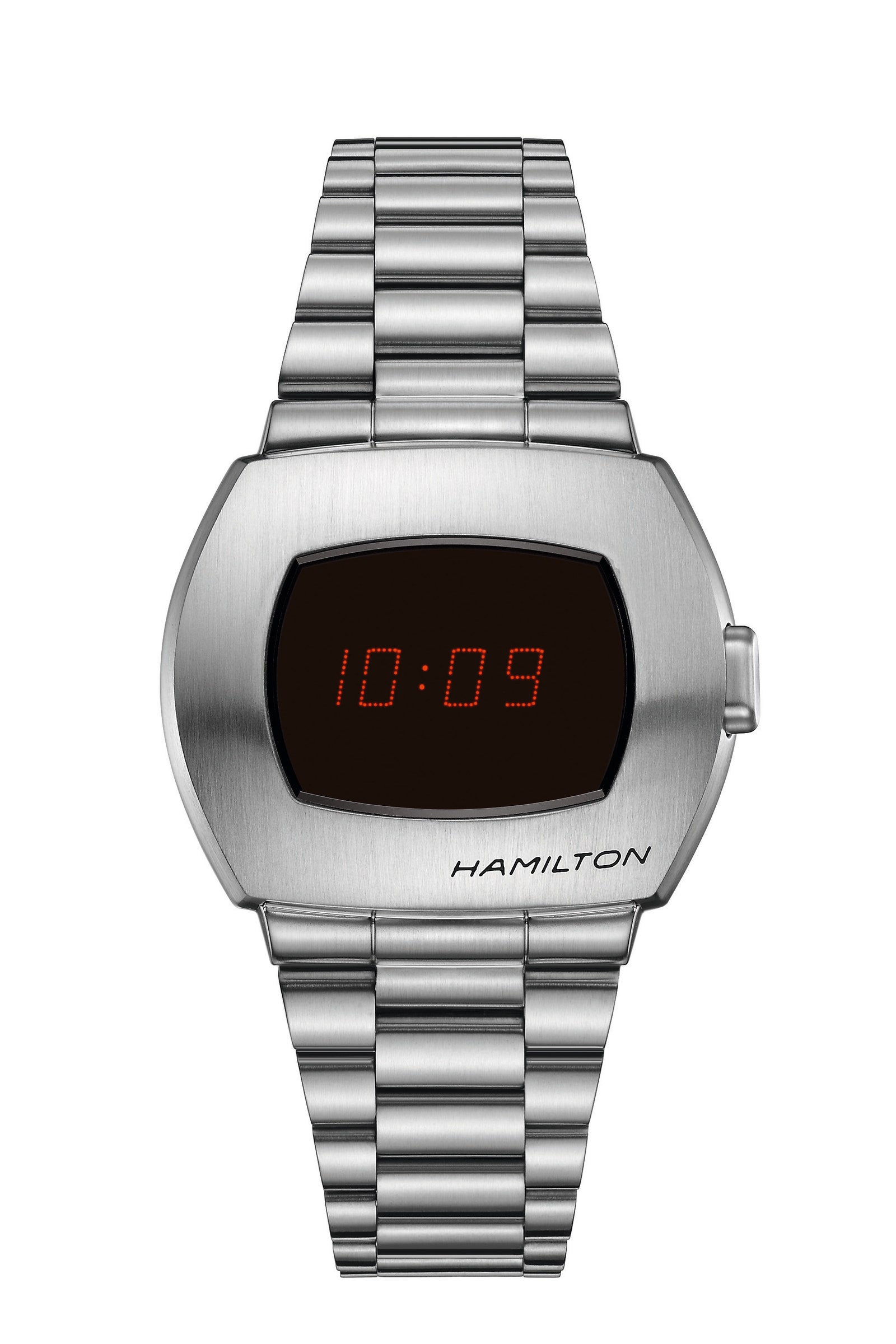 Hamilton Pulsar: The Watch That Helped Spark a Revolution Is Back

Today, it’s easy to take revolutionary technology—the phones in our pockets that can order Thai delivery, say—for granted. But even the most futuristic inventions eventually become humdrum. But in May of 1970, Hamilton president Richard J. Blakinger really did appear to snatch something straight from the future when he presented the brand’s new watch, the Hamilton Pulsar. With the Pulsar, there were no hands or dials in sight. Instead, the tiny spaceship-looking device flashed digital numerals on a tinted red screen. “Hamilton Watch goes Dick Tracy one better,” the Associated Press wrote at the time, referencing the comic-strip detective who nabbed crooks on the moon for a period. (The Spokane Chronicle went simpler: “Timepiece for Wrist Is Computer.” Hell yeah, it was.) Now, 50 years later, Hamilton is reviving that wrist computer, renamed the PSR, in stainless steel and gold.

When the Pulsar was unveiled in 1970, it claimed the title of the very first digital watch, and its spage-age looks and technology made it a hit with both real and fictional figures. James Bond fittingly used the watch, which already looked like one of the gadgets from Q’s lab, in 1973’s Live and Let Die. Plus, celebrities like Elvis, Keith Richards, Jack Nicholson, and Elton John all wore the timepiece. The watch’s secret? A new technology called quartz, then beginning its fast and rushed march to upend the watch industry.

While the Hamilton Pulsar wasn’t the first mass-produced quartz watch—Seiko released the Astron a few months earlier, on Christmas Day, 1969—it was the first to embrace its digital nature. The Seiko Astron was pretending to be something it wasn’t: a traditional watch, complete with hands and a standard-looking dial. Hamilton took the opposite approach, jumping headfirst into the Matrix with a watch that—astonishingly so at the time—didn’t tick at all, and could jump from showing you the time to the passing seconds at the push of a button. It was such a neat trick that Johnny Carson spent some time on his talk show playing around with the Pulsar the day it was unveiled. When Carson grew bored of it he threw it over his shoulder and declared, “This will never put Mickey Mouse out of business.”

But Mickey Mouse wasn’t the one in trouble. Over the next decade, the quartz technology the Pulsar helped usher into the mainstream ravaged the Swiss watchmaking industry. Quartz was both cheaper and more accurate than traditionally made timepieces, which required expertise and buckets of time to make. New and affordable quartz watches ushered in a period so apocalyptic that it’s now known ominously as the Quartz Crisis. Many timepiece brands were forced to go out of business; between 1970 and 1988 the number of people employed in the watch industry cratered from 89,450 to 28,000.

Nowadays, quartz and mechanical timepieces are better able to exist in harmony, or at least a not-so-destructive standoff: luxury watchmakers have found its hungry audience of customers willing to pay for tradition. So the PSR won’t be ravaging the watch industry again any time soon, but it is surprisingly warm with nostalgia for a digital watch.

The new version of the Pulsar keeps the same size and look of its predecessor but there are two notable differences. The word “Hamilton” now appears underneath the digital display instead of Pulsar (Seiko bought the trademark for “Pulsar” way back in 1979). Today’s version also comes with a display that’s part-LCD, part-emissive OLED—fancy acronyms that essentially mean you can read the time even in the glare of sunlight, and in a more energy-efficient way.

While so many of the conversations in the watch industry over the past couple of years center around everything but quartz, the Pulsar/PSR is a genuine piece of watch history. If you’re looking for a watch that can tell a story, you’d be hard pressed to find something with a more charming yarn to spin.

What Cool People in China, South Korea, and Italy Have Been Doing During Isolation