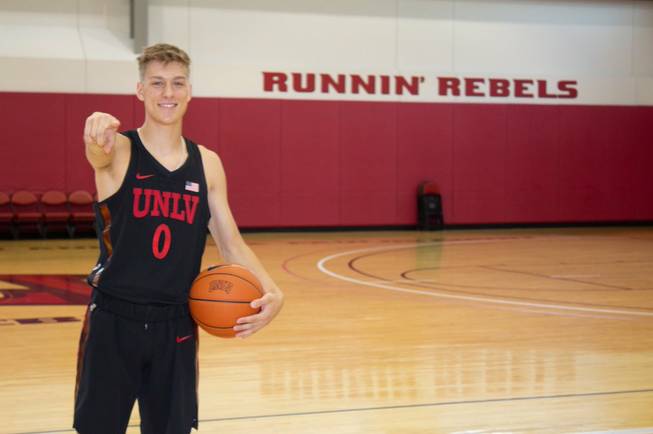 After what has been a long winter, Isaac Lindsey is excited to get back on the basketball court. It’s going to happen. It’s just that, due to a variety of factors, he’s not exactly sure when.

Lindsey, a 6-foot-4 shooting guard from Mineral Point, Wisc., committed to UNLV in June as the second player in the Rebels’ 2020 recruiting class. His passing ability and accurate outside shooting made him an intriguing addition despite his unranked status on most recruiting sites.

Lindsey could have used the 2019-20 high school season to prove himself as a hot prospect, but instead he was limited to five games due to a lingering hip injury he suffered quarterbacking the Mineral Point football team. Lindsey played through the pain for a while, but eventually opted for surgery, sacrificing his senior basketball campaign in order to get healthy in time for college.

“They told me I could have finished the rest of the season and then had the surgery,” Lindsey said, “but at that point I just wanted to get ready for UNLV so I decided to get it right away. I had a torn labrum and I had some overgrown bone on my hip, so I had surgery for that and to shave the bone down. Now I’m doing rehab and I feel like I’m 100 percent. I feel like I could be playing right now.”

Lindsey has been rehabbing with a local trainer and is currently cleared for stationary work such as ball-handling drills and light shooting exercises. He’s hoping to get the go-ahead to begin sprinting and jumping in the next two weeks.

The other situation clouding Lindsey’s hoops future is the coronavirus outbreak. His trainer’s gym has been shuttered due to the pandemic, so Lindsey is mostly rehabbing at home. And with Wisconsin schools closed indefinitely, he is preparing to shift to online learning to complete the remaining weeks of his high school coursework.

He still anticipates wrapping up high school on time.

“I think everything here is planned to graduate in normal time,” Lindsey said. “Everyone is just trying to figure out how that is going to happen. We have virtual learning and stuff like that, so I’m taking care of that and we should be able to finish on time.”

Lindsey is set to arrive at UNLV on June 4 for the summer semester and he said he hasn’t heard anything different from the Rebels’ coaching staff. UNLV has moved all classes online but has not shut down its dormitories yet (a measure some universities have taken to combat the spread of the virus).

If the UNLV summer semester begins on schedule, Lindsey expects to be there — not at a prep school.

With the Rebels facing a lot of roster turnover this offseason, there was some speculation as to how the team would make room for eight incoming scholarship players. As one of three true high-school seniors in the class, Lindsey could have attended prep school for a year; that move would have served the dual purpose of temporarily freeing up a scholarship while also putting another year between Lindsey and his injury.

But he said T.J. Otzelberger has not brought up the idea of prepping for a year.

“No, that hasn’t been a discussion at all for me,” Lindsey said. “I’m still planning on going to UNLV on June 4. There hasn’t been any talk [about prep school]. I’m super excited to get out there.”

Between the injury, the pandemic, the rehab and the prep rumors, it’s understandable that Lindsey just wants to get back on the court as soon as possible and focus on basketball. The play of the Runnin’ Rebels this season has also stoked his desire to join the program.

“I watched most of their games,” Lindsey said. “You can see how much better they got over the year, the defensive commitment they had. I know coach’s game plan and how he likes to run stuff, and it was cool to see those guys develop over the year. I liked the way they moved the ball on offense. I really see myself fitting in there with my outside shooting and the way they move the ball.”