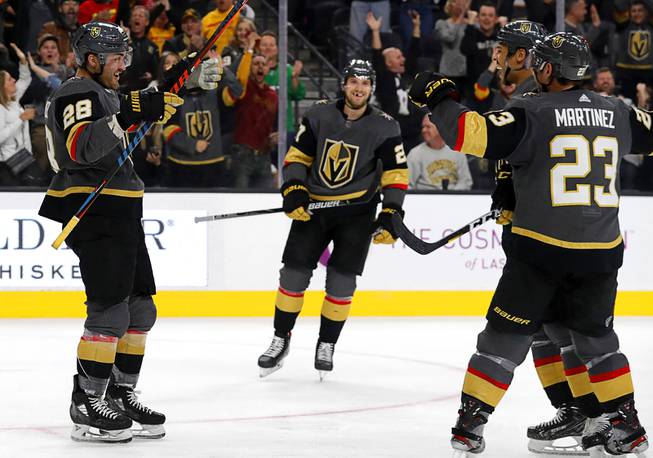 The Golden Knights were rolling right along two weeks ago. They had just picked up a signature win, were headed out to another tough road matchup and seemed motivated to maintain their top-seeding in the playoffs.

Fresh off establishing itself as the class of the Pacific Division with back-to-back road wins in Calgary and Edmonton, Vegas found out the morning of its scheduled March 12 game in Minnesota that the NHL season would be paused. When or if that game would be made up, no one knew. When or if the season will resume, still, no one knows.

Then suddenly it was over.

For the month prior, the Golden Knights had looked like one of the best teams in hockey, like the Stanley Cup contender many had predicted. Now all that’s left for Golden Knights fans to do is sit back and ask a number of questions about a season in limbo.

What are the Golden Knights’ chances if the season continues?

There’s no question the Golden Knights are one of the best teams in the Western Conference. Even before they won 11 of their last 13 games, many who look at the underlying numbers had screamed all year that they were better than the results indicated. Whether it was a new coach in Peter DeBoer (15-5-2 since his hire on Jan. 15) or simple positive regression to the mean, the Golden Knights have lived up to those standards since mid-January.

Vegas leads the NHL in share of shot attempts (54.8 percent), expected-goals percentage (56.1 percent) and scoring-chance percentage (56.5 percent). Put simply, no team in the league is better at possessing the puck and producing scoring chances while preventing chances the other way.

It wasn’t translating into wins before. It was lately.

Goaltending improvement has played a major factor, as has the Golden Knights’ best players stepping up for career seasons. Max Pacioretty and Shea Theodore are sitting at career highs in Goals Above Replacement. Mark Stone has continued his elite pace with William Karlsson, Reilly Smith and Nate Schmidt also contributing at a high level.

The Golden Knights shored up their defense in part by acquiring Alec Martinez in a move that some called an overpay at the time. The trade looks much shrewder now as Martinez has melded perfectly with the rest of the Vegas blue line.

Chandler Stephenson and Nick Cousins were also savvy in-season trades that helped boost the Golden Knights’ depth. Then, of course, they acquired the best available goaltender in Robin Lehner.

It’s hard to find a glaring flaw on the Vegas roster.

The Golden Knights would also have an easier path to the conference final than any other division winner. The Pacific has been the weakest division in the league this year, and there’s no Tampa Bay or Pittsburgh or Colorado waiting in the wings like there are in the other divisions. Edmonton is no joke, but the Golden Knights would much rather face the Oilers — a team that they’ve beaten twice in the last month — than a powerhouse second-place team like the Lightning.

Once a team makes the final four, anything can happen. The Golden Knights might not be favored against teams like the Blues, Avalanche, Bruins or Lightning, but they’re not overmatched by any means.

If the season resumes and a Stanley Cup is awarded, the Golden Knights will be in the thick of any race.

Is this year the Golden Knights’ best chance at a Cup?

The Golden Knights’ chances at a Stanley Cup this season were as good as any team in the league. What about next season and beyond though? Is it Cup or bust for the Golden Knights?

The short answer is no.

The Golden Knights have just five unrestricted free agents this summer: forwards Ryan Reaves and Tomas Nosek, defensemen Jon Merrill and Deryk Engelland and a goalie in Lehner. Setting aside Lehner, none of the four skaters are part of the core moving forward, even if any of them return on inexpensive deals.

Vegas also has four restricted free agents: forwards Chandler Stephenson, Nick Cousins and Nicolas Roy along with defenseman Zach Whitecloud. All of them should be expected to return, with no one in the group commanding big money.

That’s good for Vegas, because the team doesn’t have much cap space this summer. The Golden Knights have $12.1 million in space with only 14 players committed to next year’s roster, according to CapFriendly. Factoring in deals for the four RFAs and assuming the UFAs aren’t retained, the Golden Knights will have anywhere from about $3-7 million for at least two forwards and a goalie to fill out the lineup.

The bottom line is the Golden Knights will probably bring back close to the same team next year. Unless they make a move to clear cap space, they don’t have a lot of wiggle room.

It’s hard to see relief unless the Golden Knights are able to find a team willing to take on Stastny’s $6.5 million cap hit or if they’re interested in dealing Smith or Machessault for $5 million in savings. They could also consider selling low on Tuch and his $4.75 million annual cap hit.

Even if Fleury is traded, those cap savings would presumably go to Lehner.

The Golden Knights aren’t going to add a star in the offseason like they did with Pacioretty two years ago. This offseason will look a lot like this past one, where the team made minor moves and did not add an NHL regular. That doesn’t mean next season’s team will be worse; it just means it will be similar.

The title window isn’t closing yet, but with none of the Golden Knights’ top six forwards or top four defensemen besides Theodore (age 24) under 27 years old, it won’t be open forever.

Whenever hockey comes back…

The CDC’s directive of no gatherings of more than 50 people for the next eight weeks makes playing before mid-May almost impossible, and even that might be an optimistic timeline. A proposal by NHL players suggested not starting until late July, according to a TSN report.

If the season is never resumed, it will be a shame for everyone, but especially the Golden Knights and other teams built to win a Cup now. If it’s just pushed back, it could work in Vegas’ favor as Stone, Pacioretty and Tuch now have time to recover from injuries.

The Golden Knights were playing their best hockey of the season before the postponement. Moneypuck gives Vegas a 12.1 percent chance of winning the Cup, second in the NHL. The Athletic pegs the Golden Knights with a 1-in-10 chance, tied for fourth in the league.

The Golden Knights are one of the best teams in the league this year. And even though they should stay near the top beyond this season, all the Golden Knights’ fans can hope for is a chance to find out just how their team is this year.