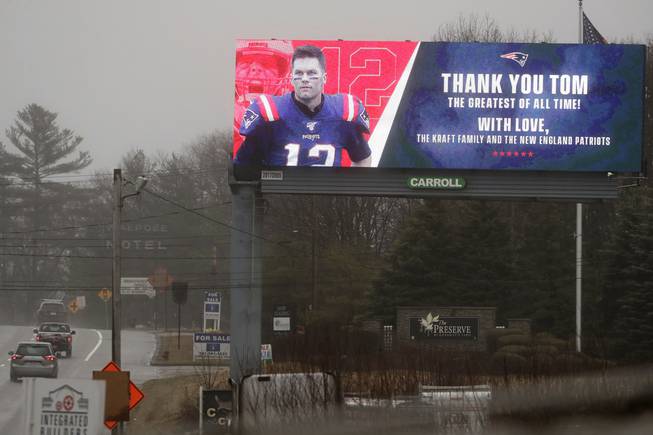 A billboard featuring an image of former New England Patriots quarterback Tom Brady stands along Route 1, in Walpole, Mass., about a mile from Gillette Stadium, which is in Foxborough, Mass., Thursday, March 19, 2020. The Kraft family and the New England Patriots signed off on a message on the sign meant to honor the quarterback. Robert Kraft is the owner of the football team. Brady said on social media on Tuesday, March 17, 2020 that he would not be returning to the Patriots and has become a free agent.

For a number of reasons, now is not the best time to place an NFL wager. That hasn’t stopped everyone.

Football betting markets have been fluid despite the sports world’s collective shutdown in light of the global coronavirus pandemic. Last week’s start of free agency has surely been the driving factor.

The personnel carousel has attracted more attention than ever before, largely because it’s the only current activity going on in any of the major American professional sports, and that’s translated into at least a bit of betting volume. Local sports book operators that kept their mobile betting apps available despite casino closures — and most of them did — have been updating future prices and season-long prop bets.

They’ve mostly been maneuvering the lines on two teams — the Tampa Bay Buccaneers and New England Patriots. Yes, quarterback Tom Brady is capable of stirring action in Las Vegas when nothing else can, even after the long-circulated Raiders’ rumors proved to be nothing.

The six-time Super Bowl champion’s move from New England to Tampa Bay will put both teams under a microscope for the upcoming season, assuming it goes on as planned, with their performances closely compared. William Hill sports books looked to immediately capitalize on that pseudo-rivalry, posting a prop wager asking bettors which team will win more games in the 2020 season.

The Patriots are currently favored by a half-game over the Buccaneers. It’s a fun prop, but mostly a novelty and a main way gamblers will be weighing in on the two teams over the next several months.

Future odds and win totals are much more prevalent, so let’s take a look at how Brady’s decision affected those markets and how to approach the teams going forward.

Bettors couldn’t help themselves. They were going to bet on Tom Brady’s next team regardless of where he went, even if it was to one of the NFL’s losingest franchises.

Congratulations to the Buccaneers, which have gone from the basement to the penthouse in future odds. Tampa Bay opened as one of the bottom 11 teams in Westgate Las Vegas SuperBook’s odds to win Super Bowl 55, at 60-to-1, and now are one of the top six, at 14-to-1.

The Buccaneers are also practically co-favorites to win the NFC South — plus-125 (risking $1 to win $1.25) to the New Orleans Saints’ Even money at Circa sports books ­— which feels a bit drastic.

Most bookmakers power-rated the Saints as the best team in the NFC at the end of the last season. The Buccaneers might have a lot of nice pieces around Brady, but they don’t have a roster that’s the same caliber as the Saints.

New Orleans beat Tampa Bay in both meetings last season by a combined 24 points — and the first was without Drew Brees. Like the 42-year-old Brady, the 41-year-old Brees has shown decline the last couple seasons but his efficiency numbers have been uniformly better than his new divisional rival.

Brees also has a second nature-type connection with coach Sean Payton after 14 seasons together — something Brady won’t have with Tampa Bay coach Bruce Arians, who struggled in his own right in his first season back on the sidelines.

Arians rated No. 22 by edjsports’ NFL coach ratings, which grade every decision a coach makes from a win-probability standpoint. Arians typically prefers a vertical passing attack, something that doesn’t fit with the late-career Brady’s strengths.

The two will surely adjust to each other and figure it out, but it’s going to take some time. There’s no reason to pay an inflated price on the Buccaneers before that happens. Not now. Not ever.

Gamblers will, though, and that’s why those looking to bet against Tampa Bay should also wait it out. The Buccaneers still have a cap space and may sign another veteran or two.

Pair a few more moves with the excitement many will feel seeing Brady in a new uniform in training camp, and there will be better chances to fade the Buccaneers later.

In one market, the odds movement on the Patriots has been more fascinating than anything seen on the Buccaneers’ side.

Sure, the Patriots took an expected hit all across town for losing a player widely considered the best in NFL history. At the SuperBook, the Patriots have swelled from 12-to-1 to win next year’s Super Bowl to 30-to-1.

They went the other direction in Circa’s win totals, though. There’s been support on the Patriots, as the sports book downgraded them to an over/under of 8.5 wins upon the Brady news.

That number didn’t last. First, Circa heavily juiced the over before eventually moving New England’s total back up to 9, where it currently sits with the over priced at plus-115 (risking $1 to win $1.15).

The line didn’t move itself. Respected bettors must have come in on New England.

It’s easy to see their rationale. No team in the NFL has a better track record than the Patriots, and even though Brady had a lot to do with that, he wasn’t the sole reason.

New England had a historically dominant defense for the first half of last season, in fact, that remains mostly intact. For years, coach/general manager Bill Belichick has proven an ability and willingness to get rid of players at the perfect time despite their ties to the organization.

His success in that department can’t be minimized just because it’s happened to the biggest name this time. Belichick almost certainly has a plan in mind for the quarterback position too, one that may not involve second-year player Jarrett Stidham or free-agent reacquisition Brian Hoyer in a starting role.

There are still a number of players on the market with starting experience — chiefly Cam Newton, Jameis Winston and Andy Dalton — as well as a draft stacked with quarterback talent.

New England will only get better from here and remain in what’s likely the NFL’s weakest division. The Patriots’ only real competition in the AFC East, the Buffalo Bills, are saddled with an inefficient quarterback in Josh Allen and a defense likely to regress.

In another telling price on Circa’s betting menu, New England is still the favorite to win the division, at plus-110 to Buffalo’s plus-145.

Both Circa’s win totals and divisional odds stipulate that the 16-game regular season must conclude by March 31, 2021 for action.

Given the uncertainty of the upcoming NFL season even happening and more unknown factors yet to play out in the offseason, it’s difficult to place any wagers at the moment. If bettors can’t resist, however, the Patriots’ odds look like they offer opportunity.

‘All in this together’: Class at Spring Valley High shows distance learning working for some