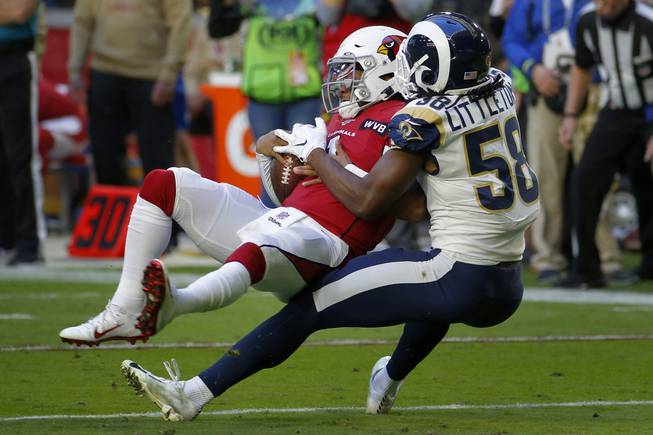 With sports on pause, Raiders score big in free agency

Arizona Cardinals quarterback Kyler Murray (1) is sacked by Los Angeles Rams inside linebacker Cory Littleton (58) during the first half of an NFL football game, Sunday, Dec. 1, 2019, in Glendale, Ariz.

The NFL drew some criticism for forging ahead with the start of its new league year and therefore beginning the free agency period in the midst of the coronavirus crisis, but the decision worked out well for sports fans missing daily activity.

Following the comings and goings of a large number of players has given many people at least a brief respite from stressing over the current state of the world. In particular, Las Vegas Raiders fans have found an escape, as the team has been highly active ahead of moving into Allegiant Stadium at the start of this season.

The Raiders made use of their ample salary-cap space by signing nine players during the first four days on which they were permitted to contact and negotiate. Those who have bemoaned the Raiders acting mostly as sellers in the past couple of years were surely satiated. The Raiders are now buyers, with eyes on being competitive in Las Vegas.

Here’s an overview of the team’s biggest deals.

Minnesota Vikings quarterback Kirk Cousins (8) fumbles as he is sacked by Chicago Bears inside linebacker Nick Kwiatkoski, left, while Bears outside linebacker Leonard Floyd gets in on the play during the second half of an NFL football game Sunday, Sept. 29, 2019, in Chicago. The Vikings kept possession of the ball.

The Raiders were needy in the linebacking corps, and they addressed it accordingly. No team in the league came close to securing as much talent in the middle of the defense than Las Vegas.

By signing both former Los Angeles Ram Cory Littleton and former Chicago Bear Nick Kwiatkoski, it could even be argued the Raiders got the two best players available at the position. Littleton, a versatile 26-year-old out of Washington, was the consensus top linebacker prize. He was expected to draw offers for as much as $16 million per year, but the Raiders signed him to a three-year deal worth a total of $36 million. It could be the first instance of Nevada’s lack of state income tax benefiting the Raiders in free agency.

It’s probably too early to put Kwiatkoski, a fellow 26-year-old out of West Virginia, in Littleton’s class, but he’s been outstanding in limited action. He was Pro Football Focus’ 15th-rated off-the-ball linebacker last season despite starting only half of the Bears’ games because of injuries.

If Kwiatkoski turns into the star some believe he can be, it would be ironic that the Raiders found the leader of their defense in Chicago after controversially trading Khalil Mack there two years ago.

The one defensive unit where the Raiders showed promise last year was along the front, so they sought out complements more than linchpins. In other words, don’t expect newcomers Maliek Collins and Carl Nassib to sell more jerseys than last year’s pair of rising rookies, Clelin Ferrell and Maxx Crosby.

That doesn’t necessarily mean they’ll be any less important, though. Collins, a 24-year-old who came from the Dallas Cowboys via Nebraska, projects to immediately slot into a starting role on the interior line. Nassib, a 26-year-old who spent time with the Tampa Bay Buccaneers and Cleveland Browns after being drafted out of Penn State, should rotate into edge-rusher spots with Ferrell and Crosby.

Both Collins and Nassib have excelled at pressuring the quarterback over their four-year careers, addressing an area of concern for the Raiders after the team mostly held its own against the run last season.

The Raiders didn’t strike out in their intention to bolster the defensive backfield, signing cornerback Eli Apple and safety Jeff Heath, but they may have hit a single when they were looking for a home run.

Pro Bowler Byron Jones was reportedly the Raiders’ top target, but the Dolphins scooped up the former Cowboy with a five-year, $82.5 million deal that made him the highest paid cornerback in the NFL. Las Vegas then shifted its focus to star veteran Chris Harris, the longtime Denver Bronco who ultimately chose to sign with the divisional rival Los Angeles Chargers instead.

On his way out of Denver, Harris told 9News he “didn’t feel comfortable” with the Raiders, despite them offering him a longer deal than the Chargers. That left Las Vegas with Apple, a 24-year-old former first-round pick out of Ohio State who has thus far failed to live up to expectations. Apple was also considered a locker room problem in three years with the New York Giants, but he repaired his image with the New Orleans Saints this past season.

The 28-year-old Heath will provide veteran presence and leadership after working his way from being an undrafted free agent out of Saginaw Valley State to a team captain in six seasons in Dallas.

Offense was bound to be less of a focus for the Raiders at the outset of free agency, but that didn’t stop them from making a couple of splashy moves. Quarterback Marcus Mariota, wide receiver Nelson Agholor and tight end Jason Witten were arguably the three biggest names to sign with Las Vegas.

Mariota, the former Heisman Trophy winner at Oregon and 2015 No. 2 overall draft pick, provides insurance and competition for starting quarterback Derek Carr. Mariota’s five-year tenure with the Tennessee Titans was a disappointment, culminating in him losing his starting job to Ryan Tannehill this past season, but he was beset by a shoddy offensive line and schemes not built around his strengths.

The Raiders should be a better fit, with an offensive line coming into its own and coach Jon Gruden’s system valuing the mobility of a player like Mariota. He’s unlikely to start over Carr at the beginning of the year but could take over if the offense struggles.

Agholor is even more of a reclamation project. The former first-round pick out of USC is as athletic as any receiver in the league but has struggled with drops and injuries.

Witten, meanwhile, is the rare 37-year-old to come out of retirement who still has some value. It will be strange not seeing the 16-year Dallas Cowboy great in navy blue and white, but he still has the blocking and pass-catching ability to help the silver and black.