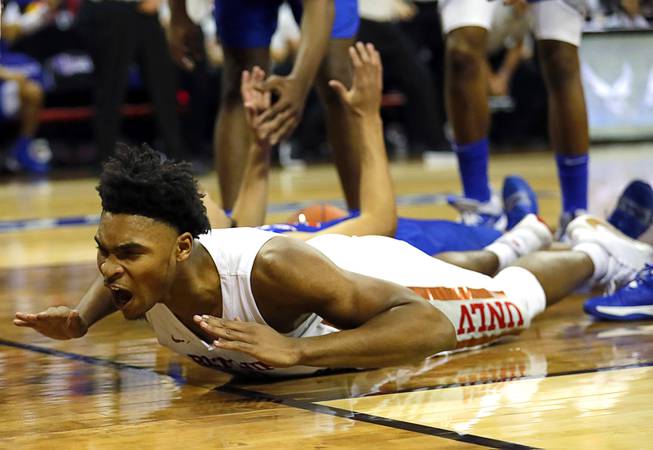 UNLV Rebels guard Bryce Hamilton (13) reacts after being called for a foul during a game against Boise State in the Mountain West tournament at the Thomas & Mack Center Thursday, March 5, 2020.

UNLV is in store for big turnover in 2020-21, as the Rebels will welcome eight incoming recruits and also see two redshirt players gain eligibility. That means an astounding 10 of the team’s 13 roster spots will be taken by newcomers.

How will the lineup and rotation shake out? With months to go before the first game — and maybe even longer than that, considering current events — let’s take an early look at how T.J. Otzelberger might choose to structure his team.

Coleman was a revelation last year, as he clawed his way into the lineup through sheer heart and hustle and became an indispensable leader. The next step will be for him to improve as a spot-up shooter. He’ll have a ton of opportunities to catch and shoot from 3-point range next year; he needs to knock them down at a better clip than the 32.4 percent he hit last season.

Jenkins is the kind of ace shooter that will help Otzelberger fully implement his spread offense. He scored nearly 20 points per game in 2018-19 as a sophomore at South Dakota State while making 45.3 percent of his 3’s, and he should only be better thanks to a redshirt year. Jenkins should hit the ground running as a star in the Mountain West.

No one took to Otzelberger’s system as well as Hamilton. The light went on midway through the season and he ended up scoring 20.9 points per game in conference play, so as long as he and Jenkins can coexist as high-scoring guards — having a pass-first point guard like Coleman should help — the Runnin’ Rebels should field the league’s best backcourt.

This position will likely be in flux at least through training camp and probably into the season. Wood is penciled in for now, as the skinny 6-foot-8 sophomore figures to see minutes at both forward positions because he can flat-out shoot the ball. But we saw the Rebels evolve into a four-guard lineup over the course of last season, so there’s a chance one of the freshman guards could emerge as an option here.

While players like Hamilton and Coleman adapted to Otzelberger’s style of play, the same can’t be said of Diong, who struggled to find his place in the offense and didn’t make the kind of defensive impact to warrant big minutes. He’s the incumbent center for now, but skilled juco import Edoardo Del Cadia could push him.

If there’s an early candidate to be the Bryce Hamilton of next season, I’d put money on Blake. He’s a smooth scorer with good size (6-foot-6) and a college-ready build; if he takes to Otzelberger’s coaching, he can be an impact player as a freshman and be a big contributor by the end of the year.

Del Cadia shot the ball well at the junior-college level (37.7 percent from 3, 81.8 percent from the free-throw line) and is much more comfortable handling the ball than Diong. If Otzelberger wants to go small, Del Cadia could be the center in a four-guard attack.

Fleming was brought in to play hard-nosed defense in the backcourt, and that should earn him 10 to 15 minutes per game off the bench.

This is just a hunch, but everything I’ve heard about Tillis leads me to believe he’ll play more than expected as a true freshman. He’s versatile, he’s a good passer and he hustles. For a team that could be thin in the frontcourt, that skill set could lead to Tillis being a surprise contributor.

Martinez has a very high upside, but the reality is that he probably isn’t ready to defend at the Division I level just yet. Still, his size (6-foot-10), passing touch and feel for offense could help him see the floor.

I haven’t seen much of Brown yet, but his athleticism makes him intriguing. If he catches on quickly he could make noise in an up-tempo system.

Yap is fluid and rangy, but the backcourt is crowded. This might turn into a learning year for the Arbor View star.

Lindsey said he plans to join the Rebels next season, but I still think there’s a chance he ends up at a prep school if UNLV needs to free up a scholarship for a college transfer this summer.

The Rebels are already losing Amauri Hardy, Jay Green, Jonah Antonio and Cheickna Dembele from last year’s roster, and Tillman is likely to join them in the coming weeks. He never found his place in the rotation in 2019-20, and off-court issues kept him from really fitting in. Expect him to put his name in the transfer portal.

WNBA postpones start of season this month because of virus