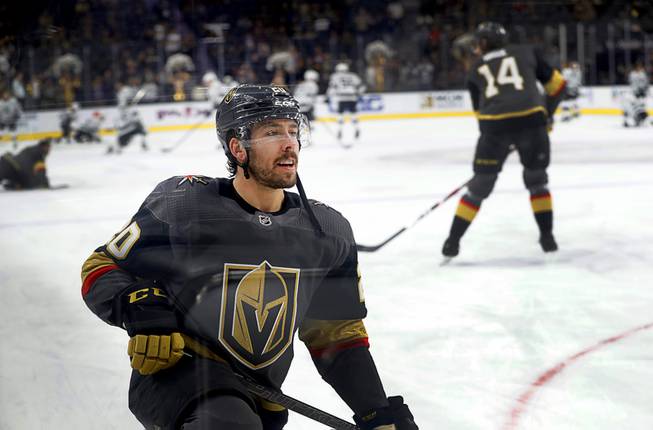 The Golden Knights’ acquisition of Chandler Stephenson last December passed without much fanfare.

Stephenson didn’t get billboards on the Strip like Max Pacioretty or Mark Stone received. He also didn’t come with controversy like Robin Lehner did.

Seeing as how the trade came down late after a game, it might have gone by without some fans even realizing it happened.

It didn’t look like a major moment in the Golden Knights’ season. They were getting a bottom-six forward from the Capitals for a late-round pick. No biggie, right?

Over the next couple weeks, the Las Vegas Sun will look back at pivotal moments throughout the season. The series will cover everything from the obvious turning points to more obscure ones that went by without much fanfare at the time but turned out to be important.

Today we look at the Chandler Stephenson trade.

Where the Golden Knights were

The Golden Knights were playing well at the time of Stephenson’s acquisition on Dec. 2 but must have seen the potential for trouble on the horizon.

Fellow center Cody Eakin played in Vegas’ game on Nov. 29, but then missed all of December, so the Golden Knights’ move for Stephenson was no doubt aided by their knowledge of Eakin’s status.

Another center went down not long after. Cody Glass played just three games with Stephenson before getting hurt himself. With both Eakin and Glass on the shelf, Stephenson’s acquisition suddenly became a rather big one. Eakin and Glass went on to miss a combined 25 games.

The Golden Knights swung a deal for Stephenson, grabbing him from the Capitals for a fifth-round pick, announced right after the team skated off the ice at Madison Square Garden with a victory over the Rangers. Stephenson took a late-night flight from San Jose to join the Golden Knights for the next night’s game in New Jersey.

He drew in as the fourth-line center against the Devils, scoring Vegas’ first goal of the game. He stepped in to help kill the team’s first penalty and was on the ice to defend New Jersey’s attempt with the extra attacker at the end of the game.

In 41 games with the Golden Knights, he had eight goals and 22 points before the NHL paused its season. In 168 games over five seasons with the Capitals he had 14 goals and 33 points.

How it was received

Most greeted the deal with a collective shrug. I wrote that it was an “intriguing depth move”, until realizing a week later he was going to need to play a bigger role with the team. General manager Kelly McCrimmon also seemed to see him as a complementary piece initially.

“Just a guy that we think can give us just a little bit more up front, a little more depth, a little more speed, versatility,” McCrimmon said in December. “Those are the things we expect to see from Chandler.

How much it mattered looking back

No one could have predicted how important Stephenson was going to become for the Golden Knights this season. The Capitals, who had players coming back from injury at the time of the trade, may have even waived him if the Golden Knights wouldn’t have coughed up pennies in the form of a pick.

Stephenson was supposed to play the Eakin role after the latter’s injury, but he surpassed those responsibilities. William Karlsson is still Vegas’ best center, but who’s been the second-best this season?

Many may not realize it, but it’s been Stephenson, who’s outpacing Paul Stastny in points per game as a Golden Knight and lifting wingers Max Pacioretty and Mark Stone to new levels.

Pacioretty, Stephenson and Stone produced a 69.3 percent expected-goals rate as a line, third-best among any unit in hockey this year.

An argument can be made that Stephenson has over-performed in 41 games in Vegas. The sample is bigger in Washington, where he was more replaceable and never rose above the bottom six.

But maybe that’s because he was never given a big enough opportunity with the Capitals.

Stephenson is a restricted free agent this summer and his situation will somewhat resemble a lite version of Karlsson’s spot from two years ago when he was coming off a career year.

Stephenson isn’t a 43-goal scorer like Karlsson, but he’s shown to be worth more than the $1.05 million he made this year.

Whether he continues his terrific pace next season and beyond is irrelevant. Vegas has already gotten more value out of him than it could have hoped, making the trade for him one of the Golden Knights’ biggest moments of the season.

It sure didn’t feel that way in December.