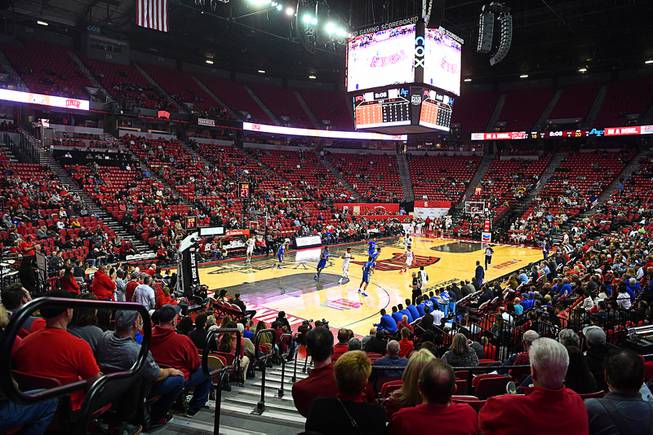 T.J. Otzelberger has recruited Caleb Grill three times, and the third time turned out to be the charm as Grill committed to UNLV on Sunday.

Grill just completed his freshman season at Iowa State, and two weeks ago the 6-foot-3 shooting guard announced his intention to transfer. He chose UNLV over Wichita State and Creighton:

Otzelberger has been after Grill for quite some time. When he was the head coach at South Dakota State, Otzelberger got a commitment from Grill in 2018, making the 3-star Kansas native the highest-rated recruit to ever pledge to the Jackrabbits. When Otzelberger left SDSU to take the UNLV job, Grill de-committed and Otzelberger tried to sway him to come to UNLV.

Grill considered the Rebels at the time but eventually chose Iowa State. After playing in 29 games and averaging 2.1 points in 13.8 minutes for the Cyclones, he put his name in the transfer portal. Otzelberger came calling again, and this time it looks like he’ll finally get the chance to coach Grill.

Grill should bring outside shooting to the Rebels’ roster. He made just 25.0 percent from 3-point range at Iowa State, but he was highly regarded as a shooting prospect coming out of high school and maintains good form on his jumper.

What Grill’s commitment means for UNLV:

The NCAA is set to vote in June on whether to allow players a one-time transfer without sitting out a redshirt year. If that passes, Grill would be eligible to suit up for UNLV in 2020-21, but if it’s voted down he’ll most likely have to wait until 2021-22 to play.

Either way, Grill will have three seasons left to play, so Otzelberger has to consider him a long-term piece. As a former 3-star recruit who is still highly thought of by the Rebels coaching staff, this is a very good get for UNLV.

The addition of Grill puts UNLV two scholarships over the limit for now. Donnie Tillman’s imminent departure will open up another spot, so that just leaves one more space for which to account.

That could happen in a number of ways. The simplest would be if one of the incoming true freshmen could be persuaded to go to prep school for a year. Another option would be for a local player (Marvin Coleman, Nick Blake, Donavan Yap) to give up their athletic scholarship and instead accept a $10,000 Millennium scholarship, which can be awarded to minority residents of the state of Nevada. That would cover most of UNLV’s in-state tuition costs. It’s a more complicated route, but it’s doable; Coleman previously utilized a Millennium scholarship when he was a walk-on as a freshman in 2018-19.

Another possibility would be an unexpected transfer from the current roster. If the NCAA approves the one-time transfer rule, one of the Rebels could decided to pack up and jump to another program with eligibility guaranteed for 2020-21. That wouldn’t be a positive development for UNLV, but the point is that fans shouldn’t fret over the scholarship count. It will work out.

Don’t expect much more movement on the recruiting front for a while. Between the huge 2020 class and the lack of seniors on next year’s roster (only Mbacke Diong is set to graduate after the 2020-21 season) the Rebels are probably set with the next two classes.

The only exception would be Bishop Gorman point guard Zaon Collins. Otzelberger has a laser target on Collins for 2021 and would take his commitment in a second. It’s unlikely the Rebels will use up any scholarships for 2021 until they know whether or not Collins is coming — that’s how valuable he is to the program’s future.