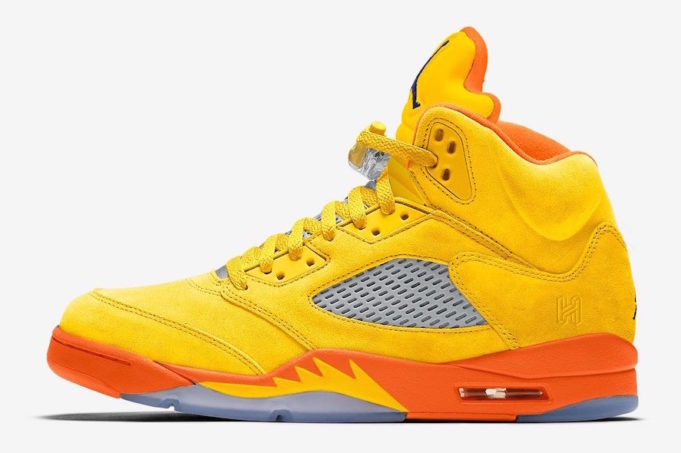 The Air Jordan 5 is getting yet another new colorway for its 30th anniversary.

Jumpman’s first shoe of the 90s was the Air Jordan 5 which immediately became a staple of popular culture. Colorways like “Grape” found their way onto the feet of Will Smith in The Fresh Prince Of Bel-Air. Now, the shoe is celebrating its 30th anniversary and to mark the occasion, Jordan Brand has announced a whole slate of sneakers that will surely make fans excited for what is to come.

The latest colorway to be revealed is the “Solar Orange” offering you see, below. This sneaker has two shades of orange. For instance, we have a light yellowish-orange that appears on the nubuck upper while dark orange is found on the lining and the midsole. Just like most Jordan models these days, there is an icy blue outsole to provide some nice contrast.

For now, it is being reported that these will drop sometime in the Fall for $235 USD. If you’re a fan of the Air Jordan 5 and need a vibrant colorway to add to your collection, these would certainly make for an incredible option. With that being said, let us know in the comments below what you think and whether or not you would cop for yourself.

Image via House Of heat