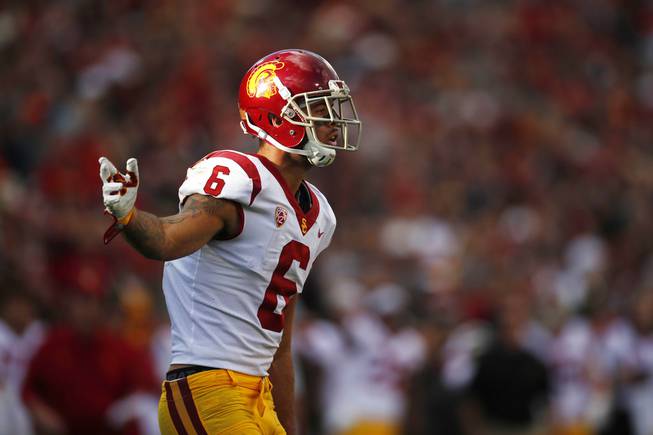 USC wide receiver Michael Pittman Jr. is shown in the first half of a game Saturday, Nov. 11, 2017, in Boulder, Colo.

The Las Vegas Raiders own two first-round picks in the upcoming NFL Draft, so much of the focus during the buildup to the draft has been on prospects at the top of the board. But the bulk of NFL rosters are built in the middle and later rounds of the draft, and the Raiders are also positioned with three third-rounders and one selection each in the fourth and fifth rounds.

Those picks may turn out to be just as important — if not more so — than the players Las Vegas chooses on Day 1. Let’s take a look at five potential later-round prospects who could end up hitting big for Vegas:

Most people expect the Raiders to target a wide receiver early in the draft, either with the No. 12 pick or the No. 19 pick, but the position is so stacked this year that if Mike Mayock and Jon Gruden want to wait a while, they can still snag a talented pass-catcher in the middle rounds.

Round 3 sounds about right for Pittman. At 6-foot-4 he has great size for the position, and he is adept at using his body to make contested catches. He was very productive as a senior at USC, catching 101 passes for 1,275 yards and 11 touchdowns, but his 4.52 40-yard dash at the combine puts him at the lower end in terms of speed.

Of course, speed isn’t everything. Pittman could be the kind of big red-zone threat that would thrive along with tight end Darren Waller and slot receiver Hunter Renfrow. The fact that his father, Michael Pittman Sr., played for Gruden in Tampa Bay and starred in the Buccaneers’ Super Bowl win probably doesn’t hurt his chances of being drafted by the Raiders, either.

Sneed is one small-school prospect who helped himself immensely at the combine. His Louisiana Tech teammate, cornerback Amik Robertson, has been getting most of the draft hype, but Sneed ran a 4.37 40-yard dash in Indianapolis, tops among safeties and second among all defensive backs.

The Raiders need speed in the secondary. Sneed had six interceptions over his final two years in college and could develop into a rangy back-end defender. He could also contribute right away on special teams. Sneed will likely hear his name called before the seventh round (where he was sometimes projected before the combine), so the Raiders could spring for him in the fifth round or possibly trade back into the sixth if he’s still available.

The Raiders want to field a disruptive defensive line that can penetrate consistently, and they’ve used draft capital and free-agency dollars to try to build it. The team just spent considerable money to acquire Maliek Collins as a one-gap defensive tackle, but that won’t preclude Gruden and Mayock from adding another player with that skill set in the draft.

Davis could fit that profile. He’s a bit on the small side for an interior defensive lineman (6-foot-1, 308 pounds), but he has the quickness and explosion to get into the backfield at a rate that should intrigue NFL teams looking for a pass-rushing specialist in the late rounds. Davis recorded 8.0 sacks last year at Nebraska.

What does Gruden want in a quarterback? That’s difficult to say, and sometimes it seems like Gruden himself isn’t quite sure exactly what he wants at the position. But he likes acquiring them, so even though the Raiders have established veterans Derek Carr and Marcus Mariota on the roster, it wouldn’t surprise anyone if Las Vegas chooses to add a college QB via the draft.

McDonald is interesting due to his athleticism and natural throwing ability. His play at Hawaii was maddening at times, but he completed 61.4 percent of his passes in two years as a starter, throwing for 8,010 yards, 69 touchdowns and 24 interceptions. As a sixth- or seventh-round developmental flier, McDonald could be Gruden’s next guy.

When you get to Day 3 of the draft, a versatile edge defender like Coughlin becomes a nice investment. At 6-foot-3, 236 pounds, he doesn’t have the size to line up as a full-time pass rusher, but he did notch 4.5 sacks last year at Minnesota.

Coughlin also did good work off the ball, recording 49 tackles with four passes defensed. He also ran a 4.57 40-yard dash at the combine, and that kind of straight-line speed should help him become a key special teams contributor for whoever ends up drafting him.