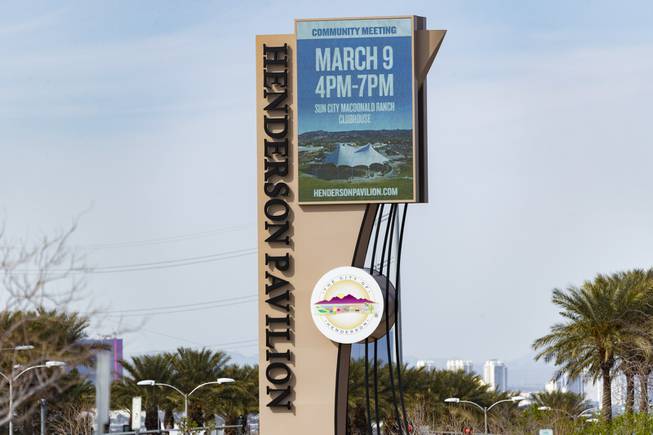 An exterior view of the Henderson Pavilion, Thursday, March 5, 2020.

Construction will begin this summer on a new arena that will house a minor league hockey team in Henderson.

The new Henderson Event Center will replace the Henderson Pavilion on South Green Valley Parkway near the 215 Beltway.

“This is an opportunity to invest in Henderson’s infrastructure, to create jobs, to drive investment and to improve a facility that is plagued with problems and is no longer usable as originally intended,” Mayor Debra March said.

The project will cost $84 million, split equally between the city and the Golden Knights.

Henderson will own the facility, but the Golden Knights’ AHL affiliate will operate it and benefit from things like naming-rights revenue.

Construction will begin this summer, with an expected completion date of June 2022, in time for the 2022-23 hockey season.

“We’re excited about this new opportunity to partner together,” Golden Knights President Kerry Bubolz said. “We will be great stewards of your investment.”

Approval did not come without opposition, including a majority of the public comments submitted at the virtual meeting.

Councilman Dan Stewart, who cast the dissenting vote, said the midst of the coronavirus pandemic is not the right time for the city to make such a large financial investment.

“Until the effects of this pandemic can be quantified, I do not see how we can incur any more debt,” Stewart said. “Right partner, wrong location, wrong time, hence I just simply cannot support this project at this time.”

The city in recent weeks has released a number of polls and studies showing support for the project. An April 30 poll showed 71% of 400 residents surveyed were in favor of it.

Even though the arena won’t be finished for two years, minor league hockey is still coming to the valley this fall.

The Golden Knights this year purchased the San Antonio Rampage, the AHL affiliate of the St. Louis Blues, and got approval to relocate the team to Henderson.

The to-be-named team will practice and be headquartered at Lifeguard Arena in downtown Henderson. The arena is about five months from completion.

The team will play its home games at Orleans Arena while the Henderson Event Center is under construction.