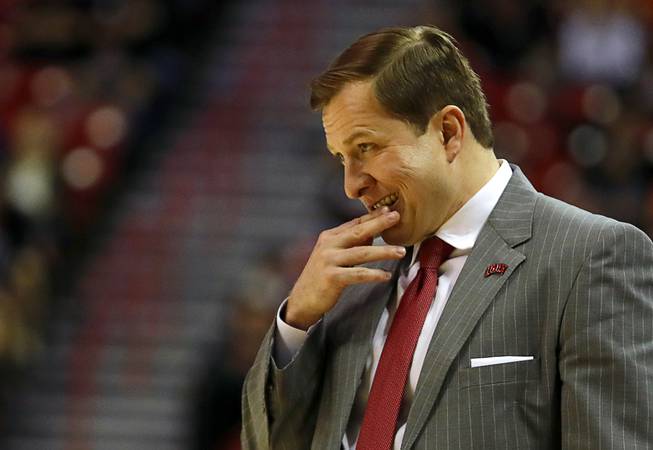 The NCAA was scheduled to vote Wednesday on a new rule proposal that would allow athletes to transfer one time without sitting out a redshirt year, but that decision has been delayed.

The NCAA Division I Council voted to table the vote until January, according to reports. That means that the rule, if approved, wouldn’t go into effect until the 2021-22 year at the earliest.

That’s bad news for incoming UNLV transfer Caleb Grill, who played his freshman season at Iowa State in 2019-20. Grill committed to UNLV last month and was hoping the rule would grant him immediate eligibility with the Rebels, but now it looks like he may have to redshirt the upcoming season.

“He was hoping like hell to be eligible,” Otzelberger said. “When he left [Iowa State], people thought the rule was going to go through, but he also knew it would be a calculated risk. He wants to play this year.”

If Grill is intent on playing this season he could petition the NCAA for a waiver, as Donnie Tillman did last summer after transferring from Utah to UNLV. Tillman’s request was approved and he gained immediate eligibility for 2019-20.

Otzelberger said UNLV plans to pursue a waiver for Grill.

“We will appeal,” Otzelberger said. “We will file a waiver. We’ll do everything to fight for him to play this year.”

The idea of allowing transfers without redshirting has been gaining support for several years and seemed to be on the verge of passing an NCAA vote. Some high-profile coaches have spoken out against it in recent months, however, making it less of a sure thing.

Otzelberger said he is “100 percent in support” of transfers being eligible immediately, but is uncertain about whether the rule will eventually pass.

“I think it’s all fluid,” Otzelberger said. “The momentum with this proposal has gone in 10 different directions in the last four months.”

If Grill does gain eligibility via a transfer waiver, he would count as a key addition to the UNLV roster this season. The 6-foot-3 guard played 29 games for Iowa State last year and averaged 2.1 points. Though he hit just 25.0 percent from 3-point range, Grill is considered to be a plus shooter.

UNLV is bringing in a large recruiting class, so any additional college experience would be welcomed by Otzelberger.

“I’m optimistic about the freshmen we’re bringing in,” Otzelberger said. “At the same time, as a head coach it’s a bit unsettling to know how much we’re going to be counting on players that don’t have any college experience. Caleb has played an entire year in the Big 12, so he has that experience.”

NCAA will allow athletes back on campus

At the same meeting where the NCAA decided to delay voting on the transfer rule, college sports governing body approved a plan to allow athletes to resume on-campus activities starting June 1.

Men’s basketball, women’s basketball and football players will be able to engage in voluntary activities at that time, depending on the guidelines put in place by local and state governments. Once UNLV coordinates a plan to reintegrate its athletes, the players will once again have access to practice facilities, meal programs, weight rooms and other amenities, even if players are still required to maintain distance from one another.

Some Runnin’ Rebels have been quarantining at locations without access to basketball hoops, so being allowed back on campus would be a positive development.

“Even if it’s just one guy at a basket,” Otzelberger said, “at least he’s got a feeling of, ‘OK, I’ve got a gym, my team is around.’ Those feelings and emotions can kick in and we can give them a place that’s better than working out at home. It’s better than a 24-Hour Fitness.”

Lace them up: Boxing set for June 9 return in Las Vegas