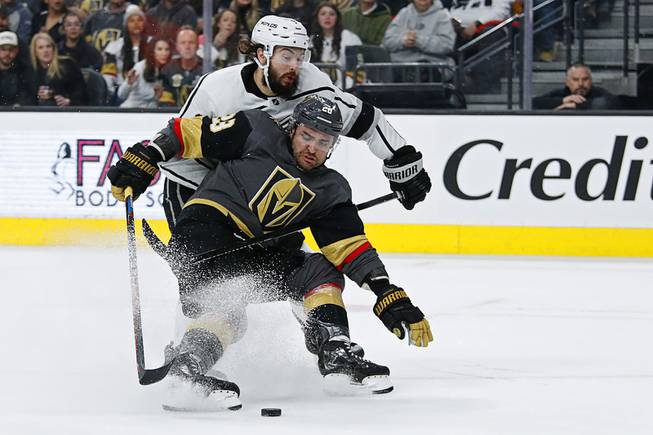 It’s starting to feel inevitable the NHL will return to finish the 2019-20 season, and now there’s been some clarity on how it might happen, and therefore, how it would impact the Golden Knights.

SportsNet reported that the league and the players’ association are working toward a scenario that would involve a 24-team playoff this summer. It’s not official, and any proposal would need to be approved by both parties, but it appears to be the leading possibility at the moment.

The site of the games is still to be determined, but fans would not be permitted regardless of the location. One possibility involves using “hubs,” where NHL cities and arenas would host multiple teams, if not an entire conference. Las Vegas is under consideration to be one of those hubs along with Columbus, Ohio, and Edmonton, Alberta, which make for a sampling of the “eight or nine” cities NHL commissioner Gary Bettman has referenced.

The proposal would give a bye to the top four teams in each conference based on points percentage at the time of the NHL season pause. The Golden Knights are third in the Western Conference, so they wouldn’t have to play an opening series.

The other eight teams in each conference would compete in a best-of-five, play-in series to determine who moves on to the regular 16-team, best-of-seven tournament.

While that elimination round was taking place, SportsNet reports the top four seeds in each conference would face off with each other in a three-game, round-robin format to help get back into playing shape. That would mean the Golden Knights would take on the Colorado Avalanche, Dallas Stars and St. Louis Blues while awaiting their round-of-16 opponent.

It’s possible that the three-game set would impact seedings, but not entirely clear.

While this setup isn’t an “obvious disadvantage” for the Golden Knights, it’s not exactly advantageous either.

That’s because the league is reportedly considering aligning the reformatted playoffs by conference instead of division. The league has gone by the latter since 2014, rewarding the four champions with home ice in the first round in a pod with a minimum of two other divisional opponents.

Throw in the fact that Golden Knights’ Pacific Division was likely the weakest in hockey this year and it set up to be a big advantage. Two home series against, say, Arizona and Edmonton, sounded a lot less daunting than what Dallas would have needed to face as the No. 3 seed in the Central — road matchups at Colorado and St. Louis.

Home-ice won’t be much of a factor with the hub idea stationing teams in the same city to reduce travel. Even if Las Vegas is the host, with no fans in the crowd, it’s not as much of a factor as it would have been in a normal year.

The conference alignment, however, would be a major factor. As the current No. 3 seed in the west, Vegas would need to navigate a tougher path than it would have in the divisional-based postseason.

They’d meet the winner of the Predators vs. Coyotes series, and then potentially the second-seeded Avalanche, which wiped out the Golden Knights twice this year. Colorado outscored Vegas by a stunning nine goals.

That’s a much tougher matchup than Edmonton, which Vegas would have been favored to face in its second series originally. The Golden Knights had beaten the Oilers in two out of three games, including a massive showdown on a back-to-back right before the season paused.

It’s impossible to win the Stanley Cup without encountering good teams, of course, and the Oilers are not a slouch. The prospect of squaring off against Connor McDavid and Leon Draisaitl in a best-of-seven series is terrifying, but given the choice, the Golden Knights would almost certainly rather play the Oilers than the Avalanche.

The Avalanche were arguably the best team in the conference during the season, leading the west in both goals and goal differential. And then, if the Golden Knights survive, there’s still the possibility of the defending Stanley Cup champion Blues waiting in the conference final.

Vegas could jump to as high as the top seed, or fall to fourth, if the initial three-game schedule among bye teams determines seeding. But either way, the Golden Knights’ built-in advantage of winning their division would dissipate under the structure that seems to be leading the way for the NHL’s restart.

It’s never easy to win a championship, and it won’t be this year either. The NHL might be making it a little harder on some teams though, and that includes the Golden Knights.

Lace them up: Boxing set for June 9 return in Las Vegas