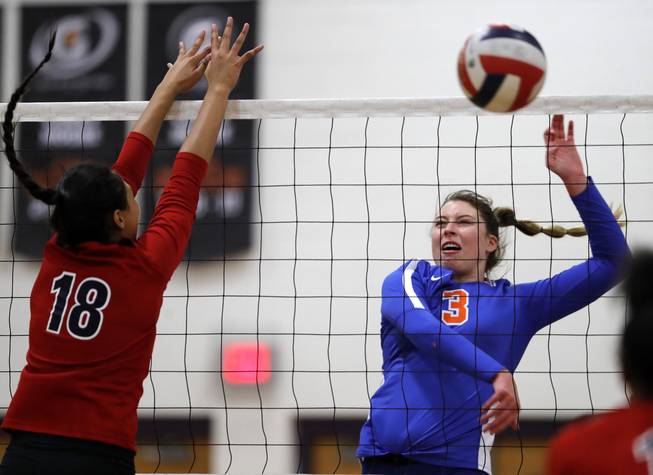 Bishop Gorman High School’s Tommi Stockham, right, spikes the ball past Liberty’s Leahi Liftee-Sefo (18) during a game Oct. 29, 2019, at Liberty High School. Stockham was the 2018 and 2019 Gatorade Player of the Year.

Editor’s Note: The Las Vegas Sun’s annual showcase of the best in high school sports, the Sun Standout Awards, was canceled this month as a precaution against the spread of COVID-19. While the pandemic may have pushed the event off the calendar until 2021, our commitment to spotlighting prep sports is undiminished. Our local athletes did some amazing things, both on and off the field. Today, we share their stories.

When fall sports start up in Nevada next school year, they will do so without two of the best talents the state has ever seen, in any sport.

Stockham’s arrival at Bishop Gorman coincided with a run of Gaels dominance, starting in her freshman season of 2016 when the Gaels won their first state championship. Stockham led the charge in 2018 and 2019, winning the Nevada Gatorade Player of the Year Award each season to lead Gorman to back-to-back championships. She’ll play in college at Indiana.

She was ranked as the No. 32 recruit in the country by PrepVolleyball.com and boosted the Hoosiers to the 15th-best recruiting class in the nation by the same site, best in program history. She was also named to the VolleyballMag.com Girls Fab 50.

As a senior, the 6-foot-2 outside hitter had 622 kills, 402 digs, 92 blocks and 79 aces, all improvements from an award-winning junior year to help the Gaels go 34-7 last year. She has a 3.09 GPA and has volunteered with Dig Pink, a campaign benefiting breast cancer research.

On the tennis court, Nevada had never seen a player like Boch-Collins. She is believed to be the first athlete in either boys or girls tennis to win four individual state championships.

Not only did Boch-Collins never lose a match to a Nevada opponent, she never even lost a set. The closest she came was in last year’s state championship match — she still won 6-0, 6-4.

“In the second set I think I lost the first three or four games and I was just mentally freaking out on the court,” she said. “I was like, ‘Oh my god, what is going on?’ I got my mental side back together and just like cruised through — put my head to the stone and got back to work.”

A five-star recruit and the No. 3 player in this year’s class by tennisrecruiting.net, Boch-Collins went 30-5 on the national circuit, including a 13-1 mark against other five-star recruits. She’ll play in college at No. 19 Baylor.