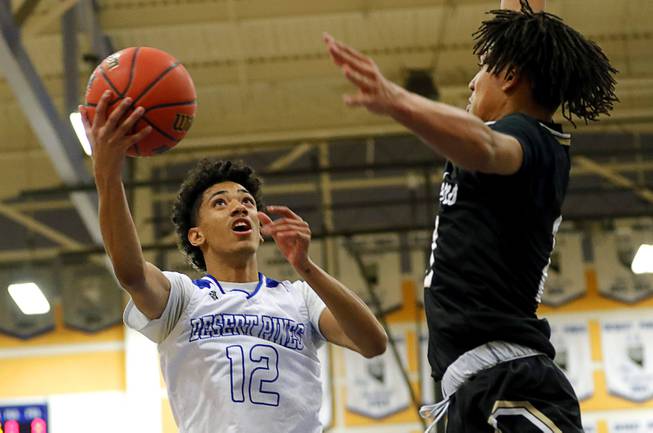 Editor’s Note: The Las Vegas Sun’s annual showcase of the best in high school sports, the Sun Standout Awards, was canceled this month as a precaution against the spread of COVID-19. While the pandemic may have pushed the event off the calendar until 2021, our commitment to spotlighting prep sports is undiminished. Our local athletes did some amazing things, both on and off the field. Today, we share their stories.

Milos Uzan spent this weekday morning running hills on Sunrise Mountain in east Las Vegas for conditioning. While basketball courts and gyms have been mostly shuttered over the past two months out of coronavirus concerns, Uzan is still finding ways to work on his game.

“I am never satisfied. I am trying to get to the NBA,” the Desert Pines sophomore guard said.

Uzan emerged as one of the Las Vegas area’s top players this past season, averaging 16.9 points, 5.5 rebounds and five assists to lead Desert Pines to the state championship game. College coaches quickly took notice, as the 6-foot-2 guard has been offered a scholarship by UCLA, TCU and UNLV.

He added 15 pounds of bulk between his freshman and sophomore seasons, and even though he’s still relatively lanky at 165 pounds, displayed the confidence of being a more complete player. Instead of settling for jump shots, he often aggressively took the ball to the basket — an inside, out combination the opposition found tough to defend.

“He was bigger, stronger and a lot more confident than last year,” said Mike Uzan, his father and the Desert Pines coach. “Last year, he had an idea of who he was. This year, he knew who he was.”

Mike Uzan has coached in Las Vegas for 20 years, meaning Milos tagged along for many practices and games. When he was in grade school, he would shoot baskets on the side court during practice or work on his ball handling by dribbling up and down the stairs.

On game day, he’d be on the end of the bench and part of timeout huddles, knowing his turn would soon come. “He’s always had a high IQ for the game,” coach Uzan said.

He’s not the only underclassmen to flourish: Faith Lutheran sophomore goalie Jordan Brown only allowed two goals in recording 18 shutouts, Hailey Morrow from Shadow Ridge softball (.449 average with 39 runs and 34 RBIs in 2019) was primed for another strong season before the pandemic, and Liberty sophomore football player Germie Bernard had 50 catches for 897 yards and 14 touchdowns. Bernard also has scholarship offers from a who’s who of college programs.