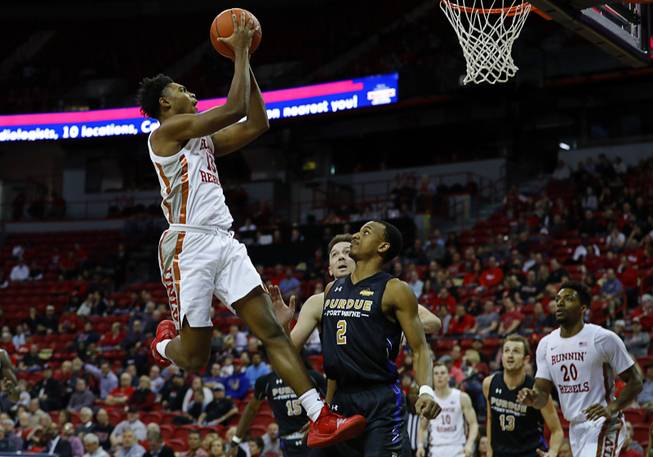 Bryce Hamilton aiming to build on breakout season for UNLV –

After making the leap to stardom last year as a sophomore, UNLV guard Bryce Hamilton’s goal was to build on that momentum and return even better next season. The COVID-19 outbreak hasn’t made that easy, but Hamilton believes he’s doing enough to take another step forward in 2020-21.

Hamilton has been quarantined with his family in his hometown of Pasadena, where he has access to a basketball gym and his trainer.

That puts Hamilton ahead of the curve, as many college players (including some Runnin’ Rebels) are unable to work with hoops due to stay-at-home guidelines.

“I’ve been in the gym, working out with my trainer,” Hamilton said. “I’ve been doing other stuff outside, running and just staying in shape. I feel like I’ve gotten better.”

Hamilton didn’t find his stride until the end of non-conference play last year, but once he figured out how to work in T.J. Otzelberger’s offense he went on a tear, averaging 20.9 points and 6.7 rebounds per game against Mountain West opponents. He shot 50.3 percent from the field and even connected on a respectable 35.2 percent of his 3-point attempts.

For his efforts, Hamilton was recognized with a spot on the All-Mountain West first team.

Now he’s got to figure out how to stay ahead of the game as the rest of the MWC pores over the film and plots to stop him.

Hamilton knows opposing coaches are devising ways to defend him.

“I just keep on working on my game,” he said. “Stick to what I do best — driving the ball. Work on my outside game. Whatever opportunity they give me, I’m going to take it.”

As well as evolving as a player, Hamilton has put an emphasis on expanding his role as a leader since last season ended. With so many newcomers set to join UNLV over the summer, Hamilton is now a seasoned veteran.

“I’m mostly trying to be a leader for the younger guys that are coming in and setting a good example for the newcomers,” Hamilton said. “We talk a lot. We have our own group chat now. We’ve been talking a lot lately, trying to get that bond so when we get back together we’ll be real familiar with each other.”

Hamilton also spent some of the offseason thinking about his future. He briefly considered testing the draft waters, but quickly decided to return to UNLV to continue developing his game.

It wasn’t a tough decision, according to Hamilton.

“There was a little bit of thought [about going pro], but it wasn’t really major,” he said. “I just wanted to see where I would be at, but I knew mostly likely that I was going to come back and stay another year at UNLV.”

By expanding his game, Hamilton believes he can build on his breakout campaign and improve his draft stock in 2020-21.