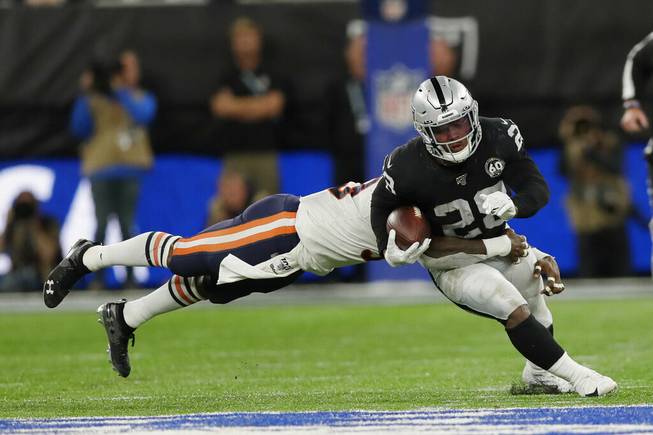 Can Josh Jacobs expand his game as a receiver in 2020?

Oakland Raiders running back Josh Jacobs (28) is tackled during the second half of an NFL football game against the Chicago Bears at Tottenham Hotspur Stadium, Sunday, Oct. 6, 2019, in London.

Josh Jacobs enjoyed a remarkable rookie season in 2019. He was so good, he may prove to be a rare exception to the conventional wisdom when it comes to drafting running backs in the first round.

The Raiders selected Jacobs No. 24 overall, then watched the Alabama product revitalize their ground game by rushing for 1,150 yards and seven touchdowns. Jacobs was averaging 4.8 yards per carry before his season was cut short due to a shoulder injury after 13 games.

Jacobs appears to have star potential, but in today’s game running backs are considered expendable and interchangeable to the point where drafting one in the first round is widely viewed as a reach. There are some elite backs who are working to break that perception, however — players such as Christian McCaffrey (No. 8 overall in 2017), Ezekiel Elliott (No. 4 overall in 2016) and Saquon Barkley (No. 2 overall in 2018) — and the one thing they have in common is that they don’t just contribute on the ground.

To be an elite running back today, a player has to add value in the passing game as well. McCaffrey is the greatest example of that, as he caught 116 passes for 1,005 yards in 2019, but he’s not the only back putting up big receiving stats. Elliott, Barkley and Dalvin Cook each ran for more than 1,000 yards while catching more than 50 passes, and Alvin Kamara caught 92 balls for 993 yards.

Jacobs didn’t make that kind of an impact as a receiver in his first year. He caught just 20 passes for 166 yards and no touchdowns, numbers which paint him as a bit of a one-dimensional weapon.

To make the leap into the upper echelon of running backs, Jacobs will have to start moving the chains as a receiver. And after analyzing his targets from his rookie season, it appears as though he has the skills to expand that aspect of his game.

The Raiders didn’t make much of an effort to incorporate Jacobs into the passing game in 2019, which was understandable at the time given his rookie status. Head coach Jon Gruden has long fielded offenses that feature throws to the RBs, so the fact that Jacobs was only targeted 27 times probably had more to do with his inexperience with the playbook than the offensive philosophy itself. And backup running backs DeAndre Washington and Jalen Richard did combine for 72 receptions, so the team did throw to its backs in sub packages.

Jacobs simply wasn’t asked to do much as a receiver. The majority of his targets came as a checkdown outlet, as opposed to players like McCaffrey and Cook who regularly run option routes, wheel routes and other patterns that send them further downfield.

When Jacobs caught passes, it was usually near the line of scrimmage as a last resort after quarterback Derek Carr couldn’t find any other open receivers:

Those checkdowns didn’t give Jacobs much to work with. The good news is that if the Raiders want to get Jacobs out into space more often, he did show some natural receiving skills as a rookie.

He doesn’t look clunky when catching with his hands, and he is smooth at the point of the catch. Jacobs can pull in a pass while on the move and turn upfield:

Jacobs wasn’t asked to beat defenders and separate as a receiver last year, so we don’t really know if he can shake linebackers like McCaffrey or wheel past them down the sideline like Barkley. But he doesn’t need to run a full route tree in Year 2 in order to make a bigger impact in the passing game.

If the Raiders simply look for him more often and get the ball into his hands in space, Jacobs will turn those into quality gains because he’s so hard to tackle in the open field.

Even a checkdown can result in a chunk play — if the pass is thrown early enough to give Jacobs some room to work:

When the Raiders handed the ball to Jacobs in 2019, he was a beast. Las Vegas will be happy with that kind of production over the next four years. But there is still upside to Jacobs’ game, and devising ways to incorporate him into the passing game would unlock that potential.

At Desert Pines, football is a brotherhood