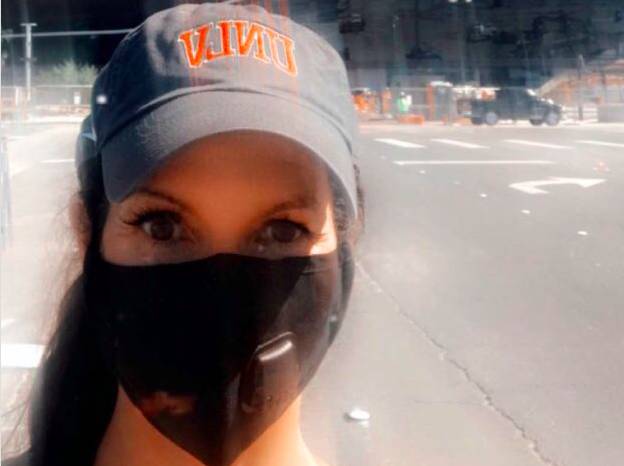 On Saturday morning, UNLV athletic director Desiree Reed-Francois made her weekly visit to check on the progress of Allegiant Stadium. While standing outside, she took the opportunity to snap a selfie and post it to Twitter.

Her message was simple.

“Let’s all wear masks so we can be inside our beautiful new home in September!” Reed-Francois wrote.

Reed-Francois included the hashtag #facemasks4fallsports, and the sentiment has caught on in the college sports world. Over the last two days, the hashtag has been propagated by athletic directors for Penn State, TCU, Ball State, San Diego State, New Mexico, New Mexico State, Washington State, Long Beach State, Wyoming, Air Force and others.

The reasoning behind the hashtag is clear and concise: The more diligent people are about wearing masks in public, the faster the country will get the COVID-19 pandemic under control and the sooner sports will be able to return.

Head coaches for fall, winter and spring sports around the country have gotten in on the hashtag, and players are also promoting it. UNLV football players Matt Brayton and Tyleek Collins were among the first fall sports athletes to tweet masked photos using the hashtag.

New women’s basketball coach Lindy La Rocque tweeted a photo of herself in a mask.

UNLV football is set to open its season by hosting Cal on Aug. 29. It will be the first game at Allegiant Stadium – if it is played as scheduled. The country may be running out of time to get coronavirus statistics in line before fall sports begin; on Friday, UNLV announced it was suspending voluntary on-campus workouts after four athletes tested positive for COVID-19.

Henderson Silver Knights’ arena will have a familiar feel