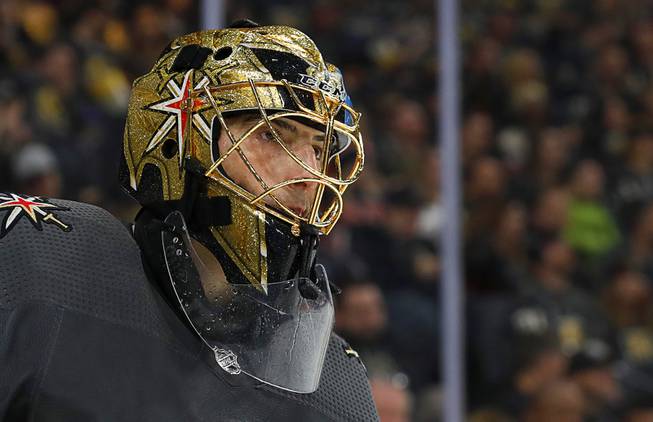 Tonight’s game doesn’t really matter. The meeting between the Vegas Golden Knights and Arizona Coyotes at 7 p.m. on NHL Network in Edmonton is an exhibition before the actual postseason begins, so who cares who wins, right?

It’s meaningless, yes, but taking into account everything that’s happened since March, it might be the most important meaningless game the Golden Knights have ever played. It’s their first game since March 9 and a chance to prove they’re ready for the grind of the postseason.

That’s how they’re looking at it anyway.

“We haven’t played a game in so long, so it’s kind of just trying to get used to everything and hopefully there’s not too much rust,” forward Reilly Smith said. “You can scrimmage as much as you want and play against your teammates, but it’s different when you jump in there in games.

“We’re hoping for the best and hopefully we won’t need that exhibition game too much, but it’s uncharted territory right now so we’re just going to play it by ear.”

This postseason is unlike any other the NHL has ever faced. In a normal year, the regular season bleeds into the postseason with only a couple days off before the playoffs begin.

But because of this year’s indefinite pause, the Golden Knights will have gone 147 days since their last meaningful game.

Coach Peter DeBoer’s response is to treat the contest like a normal game. The league has permitted dressing two additional players, but DeBoer plans to stick with the 20 he’ll be allowed in the actual postseason.

He will also stick with one goalie as opposed to other teams that are switching between two. Marc-Andre Fleury will be in net against the Coyotes.

“We only have one game before the start of the round-robin, so I want it to feel like an important game,” DeBoer said.

The Golden Knights want to return to the same level of play they were showing when the season halted in March. Vegas had won a season-best 11 of 13 games, capped by back-to-back road victories over the Flames and Oilers, cementing the Golden Knights’ spot as Pacific Division champions.

Reclaiming that form is paramount.

“The quicker we can get back to a version of that game, the more success we’re going to have,” DeBoer said. “I’ve seen pieces of it in training camp and scrimmages against each other, but until the live bullets are flying in a live game like (tonight) you don’t know where you’re at, so I’m looking forward to seeing where we’re at that way.”

Players said there are several aspects of the game that are important to lock in during their first live action in months. Forward Jonathan Marchessault says “legs and lungs” are a big thing, meaning he wants to make sure conditioning is locked in for when games could go to multiple overtimes.

Defenseman Nate Schmidt will be fixated on his gaps, how he spaces himself from opposing forwards to not allow them to get behind him. It’s the kind of minutiae that is hard to replicate in practice but carries amplified value in the playoffs.

These are competitive athletes at the end of the day and it’s sometimes hard for them to remember that they don’t have to win. The Panthers and Lightning even had a fight in their scrimmage Wednesday. The Golden Knights won’t be laser-focused on the score, but that doesn’t mean they won’t know what’s going on.

Aiming for value: Your guide to betting the start of the NHL postseason