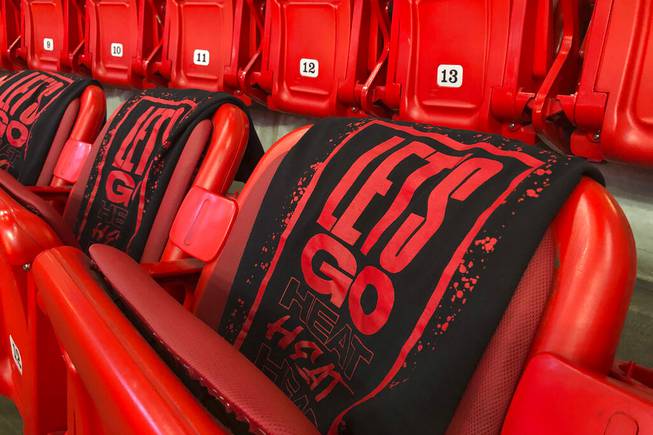 Five sports, five bets: What to wager on as major sports return this weekend

In this Oct. 23, 2019, file photo, “Let’s Go Heat” is displayed on T-shirts in the stands as the Miami Heat and the Memphis Grizzlies practice before an NBA basketball in Miami, Fla. There’s a clear desire for basketball to resume but, perhaps mindful of how rushing back too quickly hurt other leagues around the world, the NBA seems to be taking very cautious baby steps back to the court.

It started with German soccer and Korean baseball.

“Five bets, five sports” began with those two leagues as virtually the only team-sport betting options available in the world. The hope was that someday soon it would all change.

That someday soon arrives this weekend.

Betting boards are flush with wagering choices that American sports fans are most accustomed to, and there’s only one way to celebrate. I’m going to traverse all four major sports for the first time in today’s column, and throw in one niche option that ties back to the column’s origins.

Enjoy the return of sports, and good luck.

Read below for this week’s five picks. Records are attached individually by league with the monetary figure calculating the success of a hypothetical bettor placing a $100 wager on every pick that’s run in the column. Odds are the best currently available in Las Vegas at publication time.

NBA (0-0): Miami Heat plus-2 vs. Denver Nuggets at Station Casinos

These teams were incredibly even before the season went on hiatus — the Nuggets had a slightly higher win percentage but the Heat had a higher point differential — and they reportedly have endured extremely different fortunes the past few months.

Miami seemed largely unaffected by the coronavirus, with no players testing positive and most staying in shape in order to pick up where it left off upon team facilities opening in June. Meanwhile, Denver’s best player, Nikola Jokic, was diagnosed with the virus while back home in Serbia and several other players had nagging injuries that affected their preparation going into the Orlando bubble.

That all seems to be glossed over now that the world has gotten their first glimpse at rookie Bol Bol, who was hurt the rest of the season but put on a clinic in a pair of Orlando exhibition games. This line opened as a pick’em and has since moved 1.5 to two points in the Nuggets’ direction.

It’s likely that has something to do with Bol, which is preposterous. He’s yet to even play a real NBA game, after all.

The Heat are well-coached and should be sharp in their first action back on the court.

This series is a lot closer than public perception indicates.

Chicago actually graded out as a better team coming into the season, and though Edmonton outperformed it through 70 games, the gap wasn’t all that sizable. The Blackhawks had a minus-6 goal differential against what Hockey Reference rated as the third toughest schedule in the NHL, while the Oilers posted a plus-8 against the seventh easiest schedule.

Oh, and by the way, Chicago took two out of three from Edmonton during the regular season. It’s easy to be swayed by Edmonton because of their star power, but the Oilers are pretty thin beyond their all-world first line starring Connor McDavid and Leon Draistal.

They deserve to be favorites in this qualifying-round series on their home ice both from a series and game-by-game perspective, but not this big of a favorite. The Westgate is currently offering the biggest number in the world on Chicago, and it represents a great deal of value.

MLB (0-0): Cleveland Indians plus-115 at Minnesota Twins at Station Casinos

The rumblings out of Cleveland’s camp going into the season was that Carlos Carrasco had regained his form coming off of a leukemia diagnosis a year ago and was ready to once again look like the Cy Young candidate he was earlier in his career.

It’s too early to tell for sure, but Carrasco looked the part in his first start of the season when he struck out 10 batters in six innings as part of a 9-2 win over the Royals. Now it’s time for a real test, against the more formidable Twins lineup.

Carrasco should be up for it, at least more than this line indicates. His stuff profiles better than Twins’ starter Kenta Maeda, who also got off to a hot start on the season in puzzling the White Sox en route to an easy 14-2 victory.

Minnesota’s offense made that outing completely stress-free by scoring five runs in the first inning, and another four in the second, for Maeda but he can’t count on that type of support today. The Twins’ bats are better than the Indians’ but not enough to justify the number here.

Take the plus price in what looks more like a pick’em game.

The NASCAR Cup Series should add a Most Snakebitten honor to its annual awards show at the end of the season.

It would be quite a race this year. Ryan Blaney and Chase Elliott come to mind as finalists, but no one is catching Erik Jones, who’s consistently had a faster car than his results indicate.

Some break, typically to no personal fault, always seems to go against Joe Gibbs Racing’s youngest driver. Bad luck tends to regress over time, however, and Jones looks like a bet-on for the final portion of the NASCAR calendar.

His odds are depressed because of factors outside of his control like being collateral damage in a wreck caused by other drivers or getting caught on pit row at a bad time. Jones has been solid if not above average in areas he and his team can control like speed and driving ability.

It’s tough to back him against the best drivers in the series, but he deserves to be more than a virtual pick’em against the middling types like Bowyer that he’s typically matched up against in sports books.

In this Feb. 25, 2020 file photo Denver Broncos general manager John Elway speaks during a news conference at the NFL football scouting combine in Indianapolis. NFL teams are having to rely more heavily on game film of college prospects as they prepare for the draft at a time when the COVID-19 pandemic has halted business as usual. On Tuesday, March 31, 2020 Elway said in a conference call, “We’ll just have to conclude the best we can from what we can see on the tape.”

Let’s revisit the final five-week stretch of last year’s regular season that suddenly has the Broncos being regarded as a trendy sleeper for the upcoming NFL season.

Two of the four wins, notably against divisional opponents in the Raiders and Chargers, came by a total of four points in a pair of games where they were outgained by a combined 380 yards.

Yes, Denver wisely went with a youth movement late in the season including putting Drew Lock at quarterback, but youth movements rarely pay off immediately. There are peaks and valleys to becoming a contender.

The upcoming season looks like a valley for the Broncos. They’re raw and inexperienced on offense in a season where that’s looking like more of a disadvantage than ever before with cut-down training camps.

Denver should still be average at worst on defense, but the unit no longer looks like a surefire bet to sit near the top of the NFL. The Broncos ranked 13th in the NFL last year in giving up 5.4 yards per play.

The schedule also gets significantly tougher with the AFC West teams paired against the NFC South for its inter-conference games. The Broncos have reason to be excited for their future, but it looks further out than this year.

Analysis: Can Darren Waller be a red-zone producer in 2020?

Allegiant Stadium nearly built, but will fans get to come watch Raiders play?