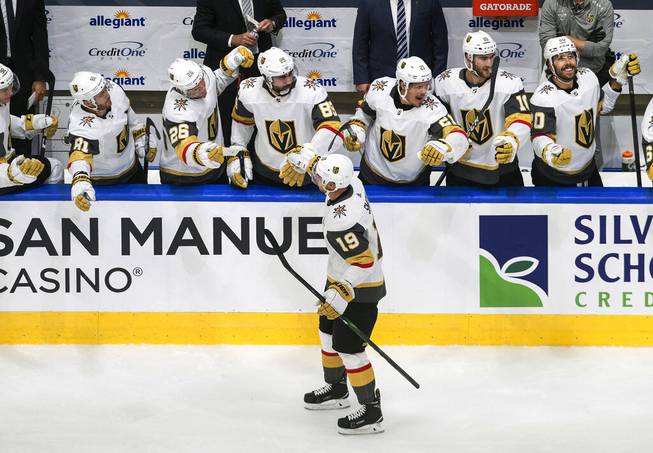 Golden Knights’ Reilly Smith (19) celebrates a goal against the Arizona Coyotes during the first period of an exhibition NHL hockey game Thursday, July 30, 2020 in Edmonton, Alberta.

The Golden Knights will take the ice Monday against the Stars for a game unlike any other they have seen in the postseason.

It’s the first of three round-robin games for seeding in the NHL reboot, meaning a win could put the Golden Knights on an easier path to the Stanley Cup Finals.

But a defeat wouldn’t hurt their chances of a deep run, as Vegas is already guaranteed a spot in the conference quarterfinals based on wining the Pacific Division in the pandemic-shortened regular season.

That means there are two paths the Golden Knights could take: Use the games as a tuneup, or treat them with the urgency of a playoff game. The Golden Knights’ players say they are choosing the latter.

“These games are crucial,” forward Nick Cousins said. “We want to give ourselves the best chance possible and we want that top seed. I feel like they’re going to be really competitive.”

Vegas will have three round-robin games, also taking on St. Louis on Thursday and Colorado on Saturday. Whichever team accumulates the most points (based off regular-season rules) grabs the top seed, presenting a terrific opportunity for a Vegas team that finished six points behind top-seeded St. Louis.

The Golden Knights have played once game since arriving in the Edmonton bubble, a 4-1 win over the Coyotes in an exhibition on Thursday. The Golden Knights were pleased with their performance then, not just in the final score but in the way they played to get there.

“The first exhibition game, we treated it like a playoff game,” forward Ryan Reaves said. “We discussed that before and everybody was on the same page and it looks like that’s kind of everybody’s mentality around the league, just looking at other games.”

The Golden Knights earned the right to play in this round-robin, a playoff soft open while other teams fight in an elimination series to qualify. It allows Vegas the luxury of taking chances and not forcing it into hard decisions just yet.

For instance, coach Peter DeBoer said he hasn’t figured out how he will answer the goalie question. He started Marc-Andre Fleury on Thursday, and intimated Robin Lehner will get two of the round-robin games. He won’t have to pick a goalie for an elimination series until the first round begins Aug. 11.

It also gives the Golden Knights time to get their roster to full strength.

Winger Max Pacioretty is still not with the team, which would be problematic if Vegas was playing elimination games this week. Defenseman Nate Schmidt appears to be fine after leaving Thursday’s game with what DeBoer called a cramp, but if he has a setback, the Golden Knights won’t feel compelled to play him like they might in a playoff game.

The Golden Knights are ready to go whether they’re playing elimination games right away or not. It’s how they’ve treated camp since the beginning and it’s how they’re coming at the Stars tomorrow afternoon.

Keys to a Golden Knights victory against Dallas

Analysis: Can Darren Waller be a red-zone producer in 2020?