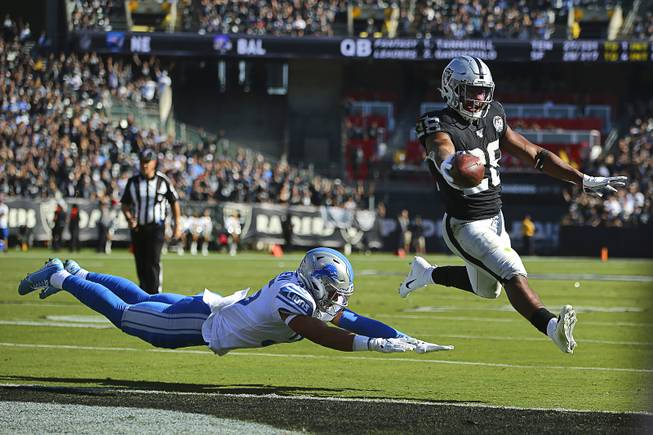 Raiders running back Josh Jacobs runs for a touchdown past Detroit Lions defensive back Miles Killebrew during the first half of an NFL football game in Oakland, Calif., Sunday, Nov. 3, 2019.

One of the Raiders’ biggest stars was conspicuously absent as the Raiders took to the practice field as a full team for the first time Wednesday morning.

Running back Josh Jacobs, the runner-up for last year’s NFL offensive rookie of the year award, was nowhere to be found on the first day of the league’s phase 2 of training camp, a “ramp-up period” with helmet-only practices. Before Raiders fans and the fantasy football community could start to panic, Raiders coach Jon Gruden assured everyone that nothing was wrong with Jacobs at the conclusion of the 90-minute practice session at the team’s Henderson headquarters.

Jacobs further assuaged any fears by describing his absence as a planned off day.

“That’s just the schedule the trainers have me on right now,” Jacobs said. “Some days, I go in. Some days, I do less than others.”

It should come as no shock that Las Vegas will want to do everything it can not to overburden the 22-year-old Jacobs going into his second season. With so much excitement and expectations being placed upon the passing game after the team loaded up on new weapons for quarterback Derek Carr, it’s important to remember that the running game is where the Raiders made the biggest strides a year ago.

They were much more formidable on the ground than in the 2018 season, when they fielded one of the worst rushing offenses in the league by most metrics. Much of the success could be attributed to Jacobs, who racked up 1,150 yards and seven touchdowns on 242 carries after the team selected him with the 24th overall pick in the draft.

But the heavy usage took its toll, as Jacobs missed three of last season’s final four games with an injured shoulder. Even with added depth at running back — the Raiders drafted Lynn Bowden Jr. and signed Devontae Booker this offseason — keeping Jacobs healthy will be imperative for the upcoming season.

“I don’t feel the shoulder at all,” Jacobs said in declaring himself fully healthy. “I’ve been doing heavy reps all summer, multiple reps all summer and I haven’t felt that at all. For the most part, this is the best my body has felt. I’m lighter than I was last year and everything, so it’s been pretty smooth.”

Workload management might be the surest way to prevent a sophomore slump, which has plagued many big-name running backs in recent years.

Before Jacobs and the Philadelphia Eagles’ Miles Sanders last year, 11 running backs had also been named finalists for offensive rookie of the year dating back to the 2015 season. Despite the group collectively tallying almost the exact same number of carries in their second seasons, nine of the 11 saw their yards per carry and touchdown numbers decrease.

And they were no slight declines, as they combined to average 0.5 fewer yards per carry and 1.5 fewer touchdowns. That’s a type of downturn Jacobs won’t accept.

He’s anticipating more production in the Raiders’ first year in Las Vegas and graded his performance last season as a B.

“I kind of established the run aspect of my game; I feel like I want to improve that even more,” Jacobs said. “Also, blocking, I want to put some of that on film. My goal is to catch at least 60 balls this year.”

The common thread between the two outliers who improved in their second year in the aforementioned group — the Carolina Panthers’ Christian McCaffrey and New Orleans Saints’ Alvin Kamara — is their importance in their teams’ passing games. That’s the next frontier for Jacobs, who was sparsely used as a receiving threat in college at Alabama and mostly got checkdown targets as a rookie.

Jacobs managed 20 catches for 166 yards last year, but the Raiders plan to design more passing plays toward him this season. And he’s spent the offseason getting ready.

“I’ve just been working on all the little technical things receivers do and trying to implement that into my style and bring what I can to the table,” Jacobs said.

The Raiders are stressing that rest will be just as important as reps for Jacobs, though. Asked about the Raiders’ facility, the Intermountain Healthcare Performance Center, Jacobs listed off a number of amenities he’s already utilized — including a recovery pool, cryotherapy and NormaTec compression machines.

He’ll be a regular in all those corners of the building, but he won’t be alone. Gruden warned that full attendance will be rare at practice.

The Raiders are taking a forward approach in keeping players fresh; Jacobs was the first and most visible example.

“Everyone has a schedule,” Gruden said. “This a strange training camp, so there will be some strange things going on. It gives us the opportunity to look at some players in this limited amount of time we want to look at.”

Golden Knights’ knack for finishing key in Game 2 vs. Blackhawks