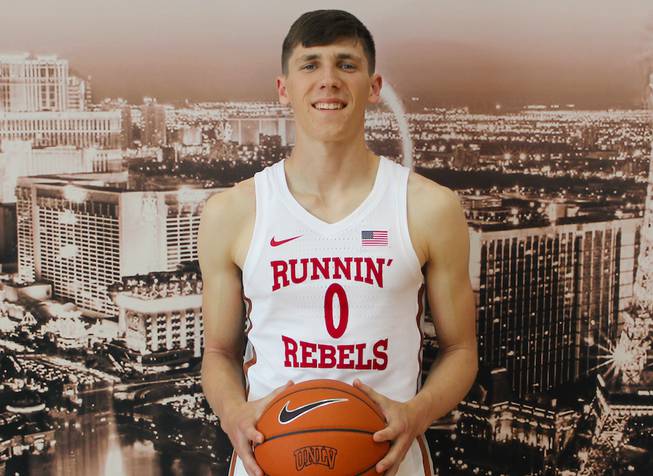 If college basketball is played this season, UNLV will have its full complement of players available.

The program received a bit of good news on Thursday, when the NCAA granted transfer Caleb Grill immediate eligibility for the 2020-21 campaign.

UNLV coach T.J. Otzelberger said Grill’s excitement was obvious when he found out.

“He was ecstatic,” Otzelberger said. “He yelled through the phone, ‘Let’s go!’ He was pumped up and I’m happy for him. He’s going to bring a good dimension to our team.”

Grill, a 6-foot-3 guard, played his freshman year at Iowa State and averaged 2.1 points in 13.8 minutes per game. He battled through a hand injury toward the end of the season and finished the year shooting just 31.4 percent from the field and 25.0 percent from 3-point range.

Otzelberger believes Grill is better than those stats suggest, however, and he has believed it for some time. Otzelberger originally recruited Grill, a Kansas native, to South Dakota State as part of the Class of 2019, but when Otzelberger left for Las Vegas, Grill de-committed.

Otzelberger tried to convince Grill to follow him to UNLV, but Grill chose Iowa State.

Now Otzelberger and Grill will get a chance to team up without the versatile guard having to sit out a redshirt year.

“It gives us tremendous depth in our backcourt,” Otzelberger said. “Caleb is tough-minded, he’s a winner, he’s highly competitive and he gives us a guy defensively who can guard the other team’s best player. Offensively he’s a great decision maker, passer and can score the ball.”

Though Grill’s reputation has largely been built around his ability to shoot the ball, Otzelberger is just as high on his defensive prowess.

“It starts with his competitive spirit,” Otzelberger said. “He wants to challenge the other team’s best player. He’s got the ability to shut down guys on the ball. He’s an elite vertical athlete. He can block shots at the rim or rotate over and make plays as a help defender. I have great confidence in him being an elite defender for us.”

Grill underwent offseason surgery and has not been cleared to play, so he did not participate in UNLV’s truncated summer workout sessions. It’s considered a minor issue, however, and he is expected to be ready to go by the time players return to campus sometime next month.