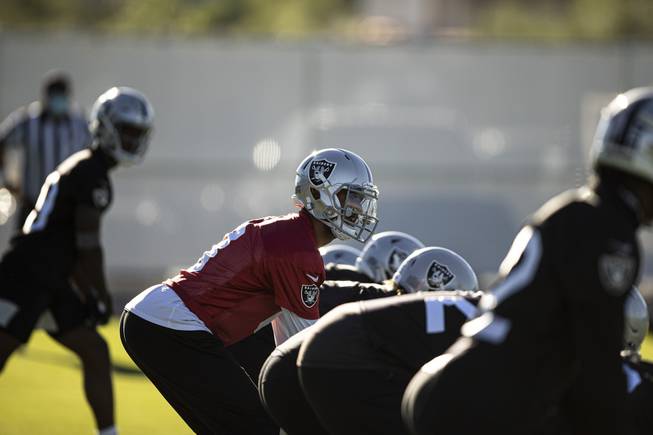 Those who have caught segments of Raiders coach Jon Gruden on television when he’s wired up with a microphone over the years may assume he spends every practice going hoarse, shouting instructions and motivating his team on a continuous loop.

He wasn’t that way Thursday morning at the Intermountain Healthcare Performance Center for the Raiders’ second full-team, helmet-only workout as part of the NFL’s training camp ramp-up period. In fact, Gruden’s voice didn’t even cut above the clamor or feature much aggression until an hour into practice at the team’s Henderson headquarters, when energy during an 11-man offensive drill dipped for the first time.

Just then, quarterback Derek Carr’s group of personnel switched in, rushed to the line and snapped the ball. Running back Jalen Richard rocketed out of the backfield on a go route and Carr connected with him 15 yards down the field.

Gruden approved and dialed his volume level back down.

The coach’s relative calm throughout the 90-minute practice session might have been the biggest testament to the Raiders’ intensity. NFL teams aren’t allowed to practice in full pads for the first time until Monday, but the Raiders are already looking focused and precise.

It’s been a “strange” training camp, in Gruden’s words, with only small groups allowed at the facility together until this week, daily coronavirus testing and constant monitoring. The NFL is limiting practices to 10 media members per day, and Thursday was the first time Las Vegas Sun was on site.

Here are five more things that stood out on the second day of practice.

It seems like there’s an obligation for coaches and players to designate a new stadium or building as “the best in the league.” The Raiders are doing their part to keep the platitude alive, but seeing the facility up close, it would be hard to accuse them of being disingenuous.

The headquarters the Raiders rushed to finish in time for training camp — located off St. Rose Parkway near The M Resort — is immaculate.

“It’s so beautiful in a sense that it makes you want to come to work,” running back Josh Jacobs said. “It makes you just want to come and be around. That’s the biggest thing.”

Gruden and his staff can decide daily between practicing either on the field-and-a-half indoors or the three full fields outdoors. The surfaces on all 450 combined yards glisten and look untouched even after a couple weeks’ worth of walkthroughs.

On Wednesday, the team split time both outside and inside. It was all outside on Thursday, with a 12 mph wind blowing southwest helping to create a cool breeze despite the 90-degree temperatures at the 7:30 a.m. start time.

“It’s exciting to have the best you could ever ask for from a facility standpoint,” Gruden said.

Offense at the forefront

The Raiders beefed up both sides of the ball in the offseason through an active free-agency period and eventful NFL Draft, but Carr’s new offensive weaponry is getting the bulk of the attention. It’s appropriate then that the offense occupied the far East practice field on Thursday, right where media was stationed.

The defense practiced on the middle field, which made it difficult to see anything going on with key newcomers like linebackers Cory Littleton and Nick Kwiatkoski, or rookie defensive backs Damon Arnette and Amik Robertson. It wasn’t difficult to hear the defense, though.

If anything, the defense sounded like the more spirited of the two sides of the ball with the defensive backs specifically — presumably led by fiery second-year safety Johnathan Abram — boisterous throughout. Defensive coordinator Paul Guenther reported everything has gone smoothly for the first two days of practice, perhaps even better than expected.

“We’ve rebuilt the engine here with some new young talent, very excited with where they’re at,” Guenther said. “They’re doing a hell of a job picking up the system, the scheme, the techniques of everything we’re doing. I didn’t know looking at the Zoom meetings and how that was going to come out and how much retention we’d have on the field, but it really carried over. We’ve had very little error.”

Signal-caller speculation has been inevitable ever since the Raiders signed former overall second draft pick Marcus Mariota to a two-year, $17.6 million contract this offseason. Some have predicted Mariota will step in as soon as Carr struggles.

Without any background on the situation, however, no one would have been calling for that scenario out of Thursday’s practice. That’s not so much of an indictment of Mariota as it is a commendation of Carr.

Of the three quarterbacks — Nathan Peterman is entrenched as the Raiders’ emergency option — Carr was noticeably the crispest and most in control at practice. He didn’t appear to miss a target all morning.

Mariota was off on a couple occasions but also had his moments, including a rope 30 yards down the field while on the run out of the pocket during a pass-rushing drill. The pass went through an assistant coach’s hands, but it was easy to envision it being in hauled in by someone like rookie Henry Ruggs III or Tyrell Williams.

One assistant coach latched onto an oversized blocking dummy on wheels for increased sturdiness throughout the time it was utilized for a running back drill. When rookie draft pick Lynn Bowden Jr. hit the bag out of his stance for the first time, a second staffer had to come over for reinforcement to keep the equipment from rolling.

The versatile third rounder out of Kentucky made an impression wherever he went on Thursday. He looked equally as powerful when split out wide and ran routes in the passing game.

There’s been more emphasis on Ruggs and Bryan Edwards among the rookie skill players because of their speed and size, respectively, but don’t underestimate the impact Bowden could have this fall.

He played quarterback, receiver and running back for the Wildcats, and could conceivably do a little bit of it all again with Las Vegas. There’s even been some talk of utilizing Bowden in rush-first, Taysom Hill-like packages at quarterback in Las Vegas.

He looked capable of excelling wherever the Raiders decide to ultimately place him on Thursday.

They might not have the same ring as “Blue 42” or “Omaha”, but Carr’s most used audible calls throughout were “Floyd Mayweather” and “Tiger Woods.” More natural football sounds of shuffling feet and pre-snap commands came across in the final portion of practice once music coming out of the sound system stopped.

There were a few artists included on Thursday’s playlist that everyone would expect at an NFL practice — Kendrick Lamar, Future and Young Thug, for example — but otherwise, it was a lot of classic rock — including AC/DC, Ozzy Osbourne and Judas Priest — that came out well before the vast majority of the roster was alive.

The players didn’t seem to mind what was playing, as they were lively from the moment they came out on the field to when they headed back inside to the locker room.

The Raiders are settling in just fine to their new home and soldiering on despite the unique circumstances.