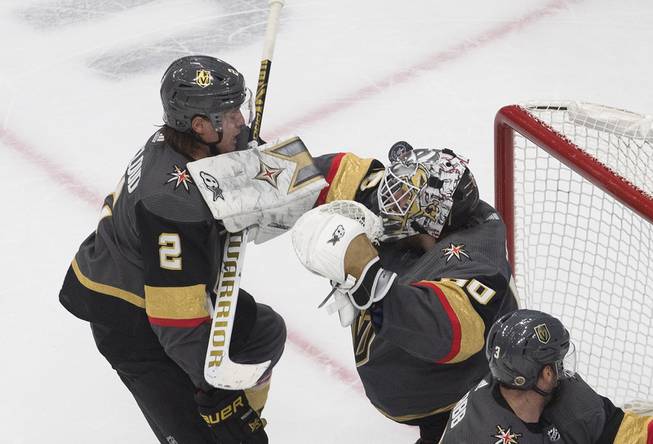 For one of the first times in his tenure as a Vegas Golden Knight, Robin Lehner encountered some turbulence Thursday night.

The Golden Knights’ trade-deadline acquisition goalie let in two Chicago Blackhawks’ goals within nine minutes early in the second period of Game 2 of the teams’ Western Conference quarterfinals series in Edmonton. That knotted up the score and threatened to turn what had started to look like a runaway Vegas series win into a prolonged thriller.

Lehner didn’t fret, though, and later said his confidence to stand tall was a reflection of the tight-knit nature of his new team.

“Everyone buys into the system and does the right things,” Lehner said. “I think in the long run you get rewarded. From a goalie’s situation, letting in a goal, there’s no panic. Letting in two goals, you trust your team and know you can come back.”

The fortitude allowed Lehner to bear down and stop all but one puck thrown at him for the rest of the game — and faulty defense was mostly to blame for Dylan Strome’s 3-3 equalizer — to help the Golden Knights to a 4-3 overtime victory. Vegas now leads the series 2-0, and Lehner has been as valuable as anyone on the roster.

The Game 2 victory made Lehner the first NHL goalie in five years to win his first seven starts with a new team and there’s no doubt all his teammates were thrilled for his success.

The Golden Knights have fully embraced Lehner, and the fanbase would be wise to follow their lead. It only takes cursory investigation on social-media platforms to see misdirected enmity thrown in Lehner’s direction.

He’s being known more as the guy who’s keeping Marc-Andre Fleury on the bench than the guy who’s playing because he gives the Golden Knights the best chance to win.

That needs to change. Fleury’s place is forever etched into Golden Knights’ history, but Lehner has proven repeatedly that he’s the better primary option going forward.

“I thought he came into our camp after the pause and was lights out in all the scrimmages and he’s picked up right where he’s left off in the games,” Vegas coach Peter DeBoer said earlier this week. “This isn’t the case of one guy not getting the job done. This is just one guy, from the time he got here, being fantastic.”

“Marc-Andre is the ultimate pro,” DeBoer said. “I think every NHL player has a lot of pride and wants to play every night but there is no one more professional in his relationships within the team or how he handles things or how he is in the community than Flower.”

It’s a delicate situation but DeBoer appears to be handling it to the best of his ability. It seems obvious he’s chosen Lehner as his first option even though he’s holding onto a “two starting goalies” company line presumably out of respect for Fleury.

That’s going to have to fade if Lehner starts each of the next two games against the Blackhawks. With a back-to-back slated for Saturday and Sunday, if there’s any time to mix it up in net, it would appear to be this weekend. DeBoer has been noncommittal but has hinted the demanding schedule may force him to consider lineup changes.

“Definitely a factor, the condensed schedule and the fact that you have back-to-backs where with a normal playoff schedule, you wouldn’t,” DeBoer said. “That is something that’s going to go into the mix when we’re making decisions.”

No one who’s followed the Golden Knights since their inception can watch the broadcast cutaways of a straight-faced Fleury sitting on the bench and not feel any emotion. Seeing a healthy, helmetless Fleury staring blankly into a faceoff circle or fiddling with his glove during a playoff game is a surreal sight considering the way he willed the team to the Stanley Cup Final two years ago.

Sports has a tendency to display the passage of time in the cruelest of ways. That’s not to say the 35-year-old Fleury is washed up, an unfair characterization he’s already battled back from once in his career, or even unable to win playoff games.