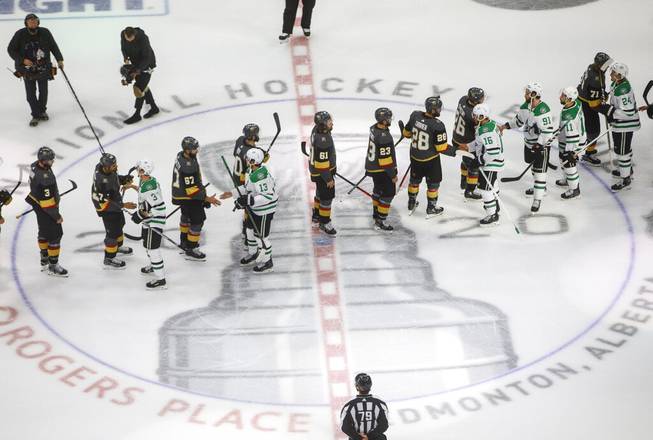 Much had changed for the Golden Knights from that night in San Jose last April.

In a makeover of the team, they brought in a new coach, goalie, third line and system in an attempt to win hockey’s ultimate prize.

But Monday night bore an eerie resemblance to that night in San Jose last season. Like that Game 7 against the Sharks, the Golden Knights had their season end after surrendering a multiple-goal lead in the third period.

The Golden Knights lost 3-2 in overtime to the Dallas Stars, eliminating them from the Western Conference Final in five games at Rogers Place in Edmonton. They changed so much, and yet the final image from the season is similar.

“To not win the Stanley Cup — that was our one goal, we didn’t want anything short of that — definitely feel defeated,” forward Reilly Smith said. “There’s positive looking into the future, but that’s not really what we’re doing right now. We all feel like this is a wasted opportunity.”

There were 10 minutes, 6 seconds on the clock in the third period and the Golden Knights led 2-0. According to Moneypuck.com, Vegas had a better than 96% chance of forcing Game 6. Even Jamie Benn’s goal, Dallas’ first, moved the odds just 12%.

At the point of the goal, the Golden Knights led in shot attempts 55-33. They were still in control, but it was starting to slip.

The third period was all Stars, evidenced by a 26-12 edge in attempts. The Golden Knights were hanging from the ledge in the third, and Alex Tuch’s tripping penalty with 5:24 kicked one hand off their grip.

It’s hard to hold on with one hand.

“They outplayed us in the third period. They were more aggressive than us,” Smith said. “I don’t think they really outplayed us very much throughout the series, but when they did, it seemed that they scored timely goals and that’s just what it came down to.”

Joel Kiviranta, the Stars’ overtime hat-trick hero from Game 7 last round against the Avalanche, picked up a loose puck and buried it with 3:47 to play in regulation to even the score.

Overtime brought perhaps the unluckiest break Vegas has ever had. You can debate whether last year’s major penalty in San Jose that cued the Sharks’ comeback should have been called at all, but there’s no debating that when Zach Whitecloud whacks at a puck and it goes over the glass, it’s a two-minute minor for delay of game.

That’s all the Stars needed to finish it off. They set up the umbrella on the power play, and when the puck came to John Klingberg at the point, there was no question where it was going. Denis Gurianov one-timed home the game-winner inside the near post, and the Stars were off to the Stanley Cup Final for the first time since 2000.

And there was Whitecloud, the rookie in his first postseason sitting in the penalty box by no fault of his own, the victim of one of the most poorly applied rules in sports.

“I just feel terrible for the kid,” coach Peter DeBoer said. “It such a shitty penalty to begin with. Not on him, just for that type of penalty to decide a game just doesn’t make sense to me. For him, he’s got nothing to hang his head about. He played his ass off and played big and heavy and played big minutes for us. He’s got a bright future ahead of him here. He’s got nothing to be ashamed of.”

Vegas hadn’t scored more than three goals in one game this month, and had mustered just six goals through the first four games of the Dallas series.

But Game 5 became a race of end-to-end hockey, which favors the Golden Knights and led to their two goals.

Tuch collected the puck around the boards in his own zone and centered it for Shea Theodore to set up the breakout. Chandler Stephenson had already left the zone, and Theodore hit him in stride for a breakaway. Stephenson doesn’t miss those often, and went five-hole on Anton Khudobin to open the scoring at 8:14, the first goal in the first period this series.

The Golden Knights kept the pressure on after the Stephenson goal and kept the ice tilted in the right direction for not only the rest of the first period, but also the second.

They even scored again on the rush to start the third. Seconds after Dallas’ top line connected for a prime scoring chance, Smith and Marchessault raced out for a 2-on-1. Smith kept it and sniped it past Khudobin 15 seconds into the third for a 2-0 lead, his first goal in 11 games.

Vegas controlled the net, but the Stars controlled the creases, a fact evident all series and amplified in Game 5. The Benn goal came 9 feet from the net. Kiviranta’s was from 10. Dallas got to the dirty areas and scored the kind of goals that teams need to win in conference finals against other elite teams.

Vegas managed just eight goals in five games, yet outshot Dallas by 48 and led in expected goals by almost four, according to Natural Stat Trick. The Golden Knights knew they played better than Dallas, and even Stars forward Tyler Seguin quipped after the game that “it says that analytics are overrated.”

“Toward the end here it seemed like we did everything right but score,” Stephenson said. “That’s what it came down to.”

It’s going to cause some head-scratching for the Golden Knights this offseason. How did they allow, three times in three series, a goalie to play so well? Corey Crawford, Thatcher Demko and Khudobin all looked unbeatable at times. Robin Lehner was spectacular in goal for the Golden Knights, but maybe the Stars were doing something to score enough goals that Vegas could not emulate.

“We’ve got to learn some things from this, about what works in the playoffs and how you score in the playoffs,” DeBoer said. “I’m still getting used to and getting to know the group. But the goal of this team is to win the Stanley Cup, and they’re right in that window.”

The Golden Knights now are heading back to their hotel, collecting their things and prepping for what will feel like a long flight back to Las Vegas. They were in the Edmonton bubble for 51 days, outlasting all but three teams.

Mark Stone said after last year’s first-round disappointment that he felt like they could have won the Stanley Cup. There’s no doubt this year’s team was built to win and had as good a chance as anyone. They were even favored entering the playoffs.

Just like last year, though, the Golden Knights are heading home sooner than they would have liked, and head to the offseason wondering what could have been.