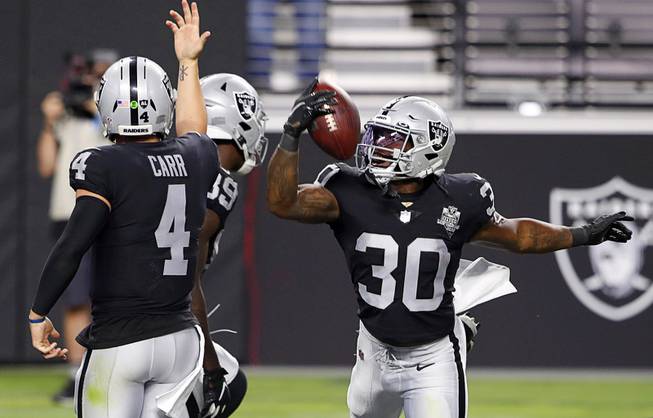 Las Vegas Raiders running back Jalen Richard (30) celebrates with quarterback Derek Carr (4) and wide receiver Bryan Edwards (89) in the end zone after scoring a touchdown in the second half of the Raiders’ first home game against the New Orleans Saints at Allegiant Stadium Monday, Sept. 21, 2020.

Faced with a potential game-determining decision with 65 seconds left against the New Orleans Saints, Raiders coach Jon Gruden caught a glimpse of kicker Daniel Carlson on the home sideline of Allegiant Stadium.

That’s when Gruden, his face burning as bright as the digital flames of the 85-foot Al Davis Memorial Torch in the opposite end zone, knew he was going to channel the energy of his franchise’s new hometown and gamble. Gruden sent out Carlson for a field goal attempt on 4th-and-10 from the Saints’ 36-yard line with Las Vegas clinging to a seven-point lead.

“He had the look in his eye like he was going to end the football game,” Gruden said, “and that’s what we did.”

Carlson nailed a 54-yard field goal, tying a career high to secure a Raiders’ victory in their first game at their luxurious new $2 billion stadium. From the field goals to the fanfare, from the end-zone celebrations to the redemption arcs, everything was bigger in the first NFL game at the venue colloquially being called “the death star” or “the Al.”

It was a veritable Vegas debut as the Raiders defeated the Saints 34-24.

“It means a lot to have a community bring itself together for us,” fullback Alec Ingold said. “That’s what we try to emulate in our play. We’re tough. We want to emulate what Vegas has and feed off one another.”

Despite the 65,000 seats on the 65-acre property off Interstate 15 near the Strip being empty, the Raiders brought a high production value to Monday Night Football. The pregame couldn’t have been any more different than Las Vegas’ Week 1 win at Carolina, where players admitted to feeling a lack of energy when, among other things, the music cut out in warm-ups.

The bass was thumping throughout as the Raiders and Saints stretched and went through their routines before kickoff Monday afternoon. The video screens emitted a clarity only thousands of fresh LED bulbs could provide.

Carol Davis, the wife of late owner Al Davis, partook in a ceremonial lighting of the torch right before kickoff in front a wall of retractable windows, which gave a glimpse of several Raiders fans assembled outside the stadium.

“We’ve got a great, young team and we’ve got a great stadium, I know that,” Gruden said. “We have a great fan base, and they were out in the street proving it.”

The de facto, external black hole was treated to a pregame flyover from the U.S. Air Force Thunderbirds but had to wait a while before the Raiders provided any thrills.

Las Vegas started slowly for the second straight game, allowing the Saints to score the first 10 points. A 31-yard field goal from Will Lutz proved to be the first points in Allegiant Stadium history, and a 1-yard run from Alvin Kamara was the first touchdown as New Orleans shut out Las Vegas in the first quarter.

“We knew if we were going to win this game, it was going to be a 15-round fight,” Gruden said, conjuring up memories of all the prizefights that have taken place within a short radius of Allegiant Stadium. “You’ve got to keep swinging against New Orleans because they’ve got the heart of a champion.”

Quarterback Derek Carr began connecting more cleanly to start the second quarter as he jabbed the Raiders downfield with short passes, including a 3-yarder to Ingold that put the home team in the end zone for the first time.

Tight end Darren Waller caught three passes on the Raiders’ first-ever scoring drive in Las Vegas and continued to be Carr’s favorite target all night with 12 catches for 103 yards and a touchdown. But the veteran quarterback otherwise spread the ball around, completing passes to 12 total receivers en route to 282 yards and three touchdowns on 28-for-38 passing.

“Our offensive talent right now is amazing,” Waller said. “I could see it from training camp, from the first time we got together as a team. There are a lot of talented guys who can do a lot with the ball.”

The best catch of the night might have gone to the last receiver on the depth chart as Zay Jones trapped a ball thrown by Carr against his body just inside the end-zone pylon for a 15-yard touchdown with 1:44 to go in the first half.

“I missed that route twice last year, so we worked the heck out of that route,” Carr said. “Coach Gruden told me, ‘You can’t miss that route again.’ I said, ‘yes sir,’ and the fact that we were able to hit that was a relief tonight.”

Jones prepared perhaps the most memorable and appropriate touchdown dance of the young NFL season as his teammates gathered around him in a circle and he simulated pumping hand sanitizer out to each of them. Cutting the Saints’ lead to 17-14 before halftime seemed reason enough to celebrate, but the Raiders got an unexpected chance to tie the game shortly after.

Linebacker Nicholas Morrow intercepted a pass from Saints quarterback Drew Brees, who went 26-for-38 passing for 312 yards against the Raiders but had prolonged dry spells and completed no passes downfield, at the opponent’s 38-yard line. That allowed Carlson to put through a 28-yard field goal before time expired in the first half — the only one of four Raiders’ red zone appearances that didn’t end in a touchdown.

“We just wanted to come out in the second half and keep our energy consistent,” Morrow said.

Better than that, the Raiders increased their energy. Carr, Waller and running back Josh Jacobs — who totaled 105 combined rushing and receiving yards on the night — marched them right down the field on a 9-play, 75-yard drive to take a lead they never surrendered.

That doesn’t mean the second half was without suspense. On the Raiders’ next offensive possession they committed their sole turnover when running back Jalen Richard dropped a pitch from Carr on a third-down play.

The Las Vegas defense forced New Orleans into a second straight punt, however, and ended up going back to Richard on what was technically the game-winning touchdown midway through the fourth quarter.

On a near identical play to the one that ended in a fumble, Richard collected Carr’s pitch cleanly and flew around the right end down the sideline for a 20-yard score to make the score 31-17.

“It’s always a downer when you make a mistake out there on the field, but we always talk about ‘snap and clear,’” Richard said. “All my teammates were behind me and coaches (said) ‘next play, next play,’ and I’m just as happy that my coaches and teammates got faith in me to give me that play again and I made up for myself.”

New Orleans sparked to life and answer with Kamara scoring his second touchdown only three minutes later, with 4:32 left to go in the game. But Carr proved up to a moment he said he had dreamt about since Allegiant Stadium broke ground three years ago with four minutes left in the game.

Although it took a pass interference call on a deep shot to Henry Ruggs III, Carr got the Raiders in position for Carlson to make the 54-yard kick that matched the enormity of the night.

With the windows behind the torch closed and the sun long gone to take away the view outside, it was impossible to see the diehards watching on makeshift television setups out front.

But everyone on the Raiders’ sideline could imagine what the scene must have looked like.