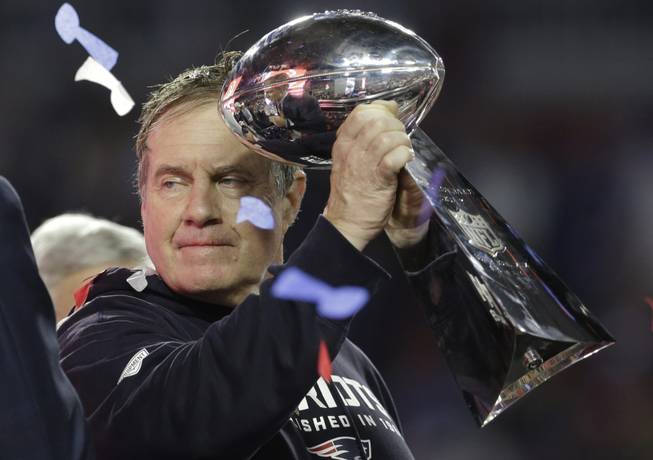 Hating the Patriots: Why it’s your duty as a Las Vegas Raiders fan

New England Patriots head coach Bill Belichick holds up the Vince Lombardi Trophy as he celebrates after the Patriots defeated the Seattle Seahawks 28-24 in Super Bowl XLIX on Sunday, Feb. 1, 2015, in Glendale, Ariz.

The Raiders have only been in Las Vegas for two games now, so we can cut the local fans a little slack if they’re not completely up to speed on franchise history just yet. So in the spirit of helping new supporters jump on board the bandwagon, here’s a crash course on being part of Raider Nation: This is a team (and fan base) with hate in its heart, and that’s a good thing.

Vengeance, anger and hatred can be powerful motivators, and the Raiders are not above those base emotions. In fact, they embrace them. The list of people, places and things the Raiders loathe is long and varied: They hate (in no particular order) Pete Rozelle, the Kansas City Chiefs, Mike Shanahan, Franco Harris, the Oakland City Council, Stan Kroenke, Bill Callahan’s Xeroxed playbook, the Denver Broncos, Tony Siragusa and NFL Rule 3, Section 22, Article 2.

But when Raiders fans today really concentrate their enmity and summon up their deepest, rawest hatred for any opponent, it’s the New England Patriots.

Silver and Black diehards who have logged decades following the team are acutely aware of why the Patriots currently stand alone atop Hate Mountain and may prefer not to read any further, but for Las Vegans who are new to Raider culture, consider this a refresher on why you should hate the Pats:

This may sound like a bit of ancient history, but the 1985 Divisional Round game between New England and the Los Angeles Raiders set the table for the decades of torment that followed.

Playing at home at the L.A. Coliseum, the Raiders built a 10-point lead in the second quarter and looked to be cruising to the AFC Championship Game. But six turnovers later — including a fumbled kickoff that New England returned for a touchdown — and it was the underdog Pats moving on, 27-20.

The Raiders had compiled a 12-4 record in the regular season and were clearly the better team, but they beat themselves on that day. Watching the Patriots upset Miami the following week to advance to the Super Bowl only made it sting more. The ’85 Raiders were also the last great Tom Flores team, as he went 13-18 over the next two years before resigning.

It wasn’t the last painful postseason defeat the Raiders suffered at the hands of the Patriots, however.

There’s no need to re-live the tuck/fumble itself, as NFL fans surely know the play. And there’s no need to re-litigate the rule — we know where everyone stands on that, including Raiders coach Jon Gruden, who was asked about it in his press conference this week (“He did fumble that damn ball,” Gruden said).

What’s more aggravating from the Raiders’ standpoint is how Patriots fans view — and completely dismiss — the Tuck Rule and the significance it had on their ensuing championship run.

Not only will New England fans argue that Charles Woodson should have been penalized for striking Tom Brady’s helmet to force the fumble, and not only do they believe the Tuck Rule was justified and applied correctly, but most arrogantly of all, they believe it didn’t even matter.

Smug Patriots fans just know in their hearts that even if the fumble had been upheld by review and the Raiders had taken over possession, Tom Brady and Bill Belichick would have found a way to win anyway. Never mind that the Raiders led, 13-10, with 1:43 remaining and that New England was out of timeouts; Patriots fans are convinced the Raiders would have done something to give the game away.

Anyway, after that call the Patriots went on to win six titles during the 20-year Brady/Belichick dynasty, while the Raiders were blown out in their one Super Bowl appearance and haven’t won a playoff game in 17 years since. That is worth every ounce of hatred you can muster.

One of the most exciting things the Raiders have done in the post-Tuck era was the trade to acquire Randy Moss, so of course the Patriots had to ruin that, too.

Moss had established himself as the best receiver in the league during his time in Minnesota, assembling a highlight reel of touchdown catches a mile long. So when the Raiders sent a first-round pick to the Vikings in exchange for Moss before the 2005 season, it was expected to breathe some life into an offense that was looking for an identity following the retirement of Rich Gannon. Instead, Moss dogged it in Oakland and put up underwhelming numbers while clearly being unimpressed with the team’s lackluster quarterback play. There were also loud whispers that Moss was exaggerating his injuries as an excuse not to give 100 percent on game days.

In 2006, Moss put up just 42 catches for 553 yards and a paltry three touchdowns, unconscionably low production from a guy who had been literally unstoppable before coming to Oakland. Convinced Moss’ best days were behind him, the Raiders accepted a modest draft-day proposal from the Patriots and traded the disgruntled deep threat for a fourth-round pick. What was the worst that could happen?

Moss went on to post the best season ever for a receiver in 2007, hauling in a record 23 touchdown catches while helping New England to yet another Super Bowl appearance. The Raiders, meanwhile, used the pick they received to draft cornerback John Bowie and went 4-12 that year. Bowie clung to NFL life support for three seasons and was finally cut with two career tackles to his name.

Oh, and just for good measure, the NFL schedule happened to send the Patriots to Oakland the following season. In his return game against the Raiders, Moss caught two touchdown passes in a 49-29 New England victory. The latest in a line of Pats-related humiliations.

Getting burned on the Moss trade didn’t dissuade Al Davis from doing business with Belichick. Just before the start of the 2009 season, the Raiders traded a 2011 first-round pick to New England in exchange for All-Pro defensive lineman Richard Seymour, who was angling for a new contract at the time and was not going to get it from the Patriots.

Davis gladly extended Seymour, who was recognized as one of the elite defensive players in the game at the time, and he had a couple of Pro-Bowl seasons in Oakland. But it didn’t turn out the way the team had hoped, as they ended up paying Seymour more than $46 million over four years while posting a 25-39 record in the process. The Raiders finished third in the AFC West in each of Seymour’s four seasons in silver and black.

How did New England do in the trade, you ask? Belichick had to wait two years for his draft pick to convey, but he eventually used the No. 17 overall pick in 2011 to select offensive tackle Nate Solder, who would go on to lock down Brady’s blind side for seven seasons. The Patriots won two more Super Bowls during Solder’s stretch with the team.

The 2016 campaign still stands out as one of the most painful “what ifs” in Raiders history. The team was chugging along that season as a Super Bowl contender, with breakout star Derek Carr quarterbacking the team to an 11-3 record heading into Week 16. Wins in the final two games would have clinched a first-round bye in the playoffs and set up the Raiders for a potential AFC title-game showdown with the Patriots.

Carr took care of business in Week 16, throwing three touchdowns to lead the Raiders past the Colts, but late in the game he was sacked and suffered a broken leg. Missing their MVP candidate, the Raiders lost to Denver in Week 17, allowing division rival Kansas City to steal the AFC West (and the No. 2 seed) via tiebreaker.

While the quarterback-less Raiders were unceremoniously bounced in the Wild Card round of the playoffs, the Patriots waltzed through the AFC (the Chiefs went one-and-done and lost in the Divisional Round) and staged an epic comeback against Atlanta to win the Super Bowl. The Raiders’ first legitimate chance at a title in more than a decade ended with a whimper, while Tuck Boy beat up a bunch of also-rans to secure another Lombardi Trophy. From the Raiders’ perspective, it’s just not fair.

Las Vegans should keep all of that in mind when the Raiders take on New England on Sunday. You’re part of Raider Nation now. Embrace the hate.