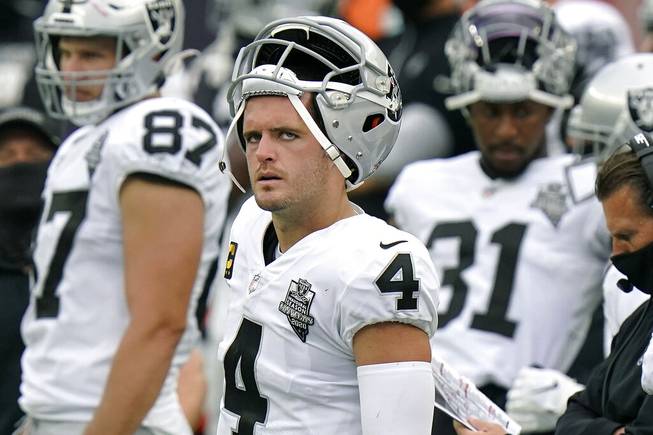 Raiders get run over at New England

Las Vegas Raiders quarterback Derek Carr watches from the sideline in the second half of an NFL football game against the New England Patriots, Sunday, Sept. 27, 2020, in Foxborough, Mass.

Late in the third quarter on Sunday, Raiders safety Johnathan Abram found himself as the last line of defense as Patriots running back Sony Michel broke into the clear.

Abram, widely recognized as Las Vegas’ hardest hitter, lined up to take a shot at Michel, widely recognized as one of the league’s least elusive backs. Michel juked left, cut right and left Abram grasping at air; the play ended in a career-long 48-yard gain for Michel, who eventually had to be run down from behind by Las Vegas linebacker Raekwon McMillan.

That’s the kind of day it was for the Raiders defense, as New England runners broke tackle after tackle en route to a 36-20 win over visiting Las Vegas.

While most of the attention heading into the game was focused on the running ability of Patriots’ quarterback Cam Newton, the Las Vegas defense held him in check (nine carries, 27 yards). It was the running back group that proved impossible to bring down, as Michel ended the game with 117 yards and Rex Burkhead and J.J. Taylor combined for 92 rushing yards on 17 carries.

As a team, the Patriots racked up 250 yards on the ground, consistently beating Las Vegas defenders to the tune of 6.6 yards per attempt.

After the game Raiders coach Jon Gruden was asked if the defense may have put too much emphasis on containing Newton, but he said that was not the case.

“When you hand the ball off and there’s nobody there, it’s a lot more than that,” Gruden said. “I give Cam credit, give the Patriots credit. We’ve got to take a good look at what happened on those plays. Obviously we did some tackles and we had a couple players out of their gap, and [we can’t do that] against the New England Patriots, not against anybody.”

Abram, the second-year safety, showed his inexperience on more than just Michel’s long run. The former first-round pick was also victimized by Burkhead twice, once on a 5-yard touchdown run and more obviously on an 11-yard catch-and-run by Burkhead that again saw Abram come up empty on an open-field tackle attempt.

The defensive breakdowns had to be disappointing to Gruden, as it looked like the Raiders might have a chance to steal the game despite some early miscues.

A Josh Jacobs fumble deep in Patriots territory took points off the board in the first quarter, and a strip-sack of Derek Carr led to a New England field goal that put the Raiders in a 6-3 hole. When Burkhead beat Abram for a touchdown to make it 13-3 with 34 seconds left in the half, it looked like the Raiders were in trouble.

Carr led the offense right down the field, however, with a long pass-interference penalty and a deep completion to Hunter Renfrow on back-to-back plays putting the ball at the 1-yard line with seven seconds on the clock. Carr hit Foster Moreau on a play-action pass for a touchdown on the next play, cutting the deficit to 13-10 at the break and giving Las Vegas all the momentum.

The Raiders received the kickoff to open the second half and drove the length of the field for what could have been a game-tying field goal, but Daniel Carlson pulled a 41-yard attempt wide left. New England took over possession and went 69 yards in seven plays, with Burkhead running over Abram on a 5-yard scoring run to make it 20-10.

Las Vegas went 3-and-out on the next possession, and New England tacked on another field goal (powered by Michel’s 48-yard sprint) to extend its lead to 23-10.

After a Carlson field goal, the Patriots answered with another Burkhead TD, this time a 2-yard plunge, to make it 30-13.

“I think it’s just discipline,” Crosby said. “Staying in our gaps, not trying to do too much. The whole defense, we’ve just got to be in our gaps and make tackles and were not doing that right now.”

On a day when the Raiders defense struggled to tackle ball carriers, the offense was unable to perform as efficiently as it did in the first two weeks when the team scored 34 points apiece in wins over Carolina and New Orleans. Though Las Vegas averaged a healthy 6.7 yards per play, three turnovers and poor red-zone execution hindered the point-scoring operation.

Carr completed 24-of-32 passes for 261 yards and two touchdowns, but he was unable to get star tight end Darren Waller involved at any point. Waller, who caught 12 passes for 105 yards and a touchdown in Monday’s win over New Orleans, was held to two catches on four targets. He finished with nine yards, and all of his production came in the second half after the outcome had been decided.

Carr credited the New England defense for varying its coverage packages against Waller.

Jacobs had 16 carries for 71 yards, and Devontae Booker picked up 31 yards on three carries, but the Raiders were unable to turn that production from the ground game into points.

With the game already out of hand in the fourth quarter, Carr was strip-sacked for a second time and New England recovered in the end zone for a touchdown to make it a 36-13 game.

The Raiders came to New England confident they could improve to 3-0 on the season for the first time since 2002, and Carr said it was disappointing to watch a “winnable” game turn into a blowout.

“The game was frustrating,” Carr said. “We come in at halftime, we went 2-minute, spread ‘em out, went down the field — at halftime we felt good about it. And then coming out obviously it got away from us.”