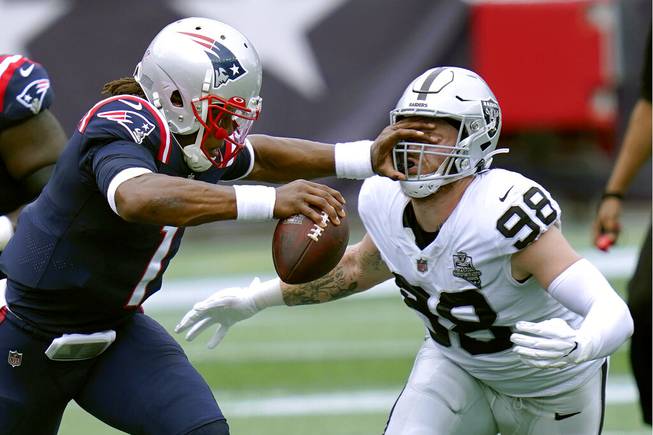 Raiders get to work on repairing rush defense after poor showing

Las Vegas Raiders defensive end Maxx Crosby (98) gets a poke in the eye as he closes in to sack New England Patriots quarterback Cam Newton in the first half of an NFL football game, Sunday, Sept. 27, 2020, in Foxborough, Mass.

The Raiders arrived home late Sunday night after their first loss of the season, and by early Monday afternoon, coach Jon Gruden had already met with defensive tackle Maliek Collins.

Las Vegas’ ability to stop the run is supposed to start with the 6-foot-2, 310-pound stalwart the Raiders signed a 1-year, $6 million deal this offseason, and it couldn’t stop the run in a 36-20 loss to New England.

“He’s going to play better,” Gruden said. “I think he’s just trying to do too much right now. I think he’s trying his best. I really like his effort. We expect a lot more obviously and I’m confident we’ll get that from him.”

The Patriots turned a close game into a second-half rout by running right at the Raiders and daring the visitors to stop them. Las Vegas couldn’t, as New England’s top three running backs — Sony Michel, Rex Burkhead and J.J. Taylor — combined for 189 rushing yards and more than 7 yards per carry.

Collins was far from the only problem, and perhaps not even the primary culprit, but there’s an extra burden on the former Dallas Cowboy after the preseason. The coaching staff pinned their hopes on his arrival helping to turn around a defense that’s consistently hamstrung the Raiders the last several seasons.

Gruden will presumably meet with a number of Collins’ teammates too before the 2-1 Raiders look to stay above .500 with a home game against the Buffalo Bills on Sunday afternoon.

“I’m not going to write the summary on these players yet,” Gruden said. “We can all play better than we did yesterday. We had no preseason. We had very little time to organize our team on defense. We’ve got a lot of new faces.”

Including Collins, the Raiders had four defensive starters on Sunday who weren’t on the team a year ago. Defensive coordinator Paul Guenther has pointed out that Las Vegas is down to three defenders — defensive tackle Jonathan Hankins, linebacker Nicholas Morrow and safety Erik Harris — that were on the team when he and Gruden arrived to the franchise in 2018.

A lot has been made of continuity helping the Raiders’ offense get off to a fast start, but the same factor might be backfiring on the defense. Even the established players had their troubles against the Patriots, though.

Las Vegas credited Johnathan Abram with energizing the defense in the first two wins of the season, but he may have turned up his aggression too far in week 3. On a couple occasions, Abram failed to provide a last line of run defense by trying to make a highlight play when a more measured approach would have sufficed.

“There’s a time and a place for the big hit and there’s another time and place for just coming to balance and trying to make an open-field grass tackle,” Gruden said. “That’s something we need to work on.”

It’s easy to place the bulk of the blame on Collins and his up-front cohorts after allowing a rushing free-for-all, but the issues clearly extended all across the defense. Short passes to Burkhead, who had seven receptions for 49 yards and a touchdown also helped drown the Raiders — a weakness from last season that linebacker Cory Littleton was signed expressly to shore up.

Like Collins, Littleton was another player Gruden promised would play better going forward. The only defensive player who’s spoken to media since the loss, defensive end Maxx Crosby, also had a harsh review of both his own and the team’s outing.

Despite breaking through for a pair of sacks on quarterback Cam Newton, his first two of the year, Crosby bemoaned both his own and the overall defensive unit’s discipline.

“I didn’t play my best,” Crosby said. “I had two penalties in the first half, which is unacceptable. I got reached one time. I know there are a few places I wish I could have back.”

Both Gruden and Crosby labeled a failure to get penetration on assigned gaps as the defensive line’s biggest failing. They expressed confidence everything could be fixed going forward, but it might be possible that the Raiders spent so much time trying to shore up their pass defense in the offseason that the rush defense regressed.

Las Vegas currently sits 30th in the NFL in allowing 5.6 yards per rush attempt, a dramatic decline from last season’s 3.9 figure that gave it a fifth place standing in the statistic. Buffalo’s offense has been more passing-based this season but last year it ranked seventh in the league in running on 45 percent of its offensive snaps.

The Raiders’ rush defense will need to get better immediately.