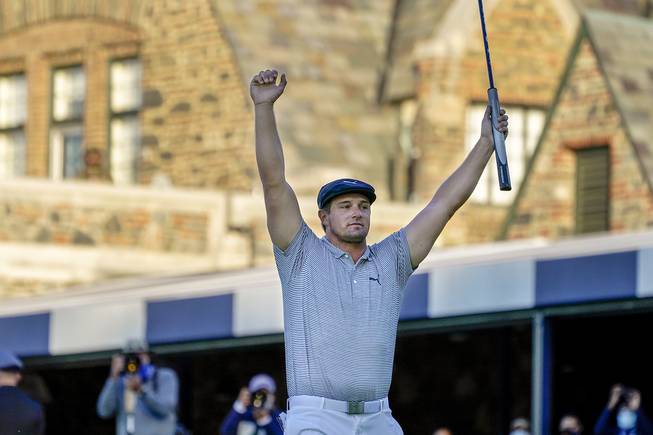 Par five: Here are some reasons to follow this year’s Shriners Hospitals for Children Open

Bryson DeChambeau, of the United States, reacts after sinking a putt for par on the 18th hole to win the US Open Golf Championship, Sunday, Sept. 20, 2020, in Mamaroneck, N.Y.

A community has sprung up around Las Vegas’ annual fall PGA Tour event, especially since the tournament started stationing itself exclusively at TPC Summerlin in 2007. Many of the same spectators and sponsors can often be found roaming the course and enjoying the amenities every year.

Collin Morikawa during the first round of the US Open Golf Championship, Thursday, Sept. 17, 2020, in Mamaroneck, N.Y.

That sadly won’t be the case this time. The 2020 Shriners Hospitals for Children Open, which runs October 5-11 at TPC Summerlin, will be staged without fans as social distancing efforts continue. It’s a disappointment for an event that has seen interest steadily rise over the years, from a combined full-week attendance of 25,000 in 2014 to nearly 75,000 last year, according to tournament organizers.

Still, while local fans might not be able to get on the course, the event remains important. Here are five reasons to consider following along as the Golf Channel airs coverage of the tournament from October 8-11.

It benefits a great cause.

Shriners Hospitals for Children returns as the title sponsor for the 13th consecutive year, because it believes in the vehicle the tournament provides to showcase its cause. And anyone can get behind the Shriners’ cause.

The Shriners have helped cover children with specialized medical care since 1922, when they launched to help combat the polio outbreak. For nearly a century since, Shriners has extended assistance to all kinds of treatment for children and now operates 22 specialized hospitals, including two in Mexico and one in Canada.

Events like this month’s PGA Vegas stop and the annual East-West college football All-Star game provide a perfect platform for the Shriners to educate people about their mission and solicit donations. Charity initiatives also dot the tournament week calendar, and though they’ve been reduced this year because of the pandemic, opportunities remain available. The Shriners will host their annual kickoff luncheon—virtually—on October 2 with activities including a silent auction.

A pair of Pro-Ams are scheduled for early in
the week, with local pro and UNLV alum Charley Hoffman among the players raising money for children’s charities. For more information, visit
shrinershospitalsopen.com.

FedEx Cup points are at stake.

The local PGA event started in 1983, and for most of its lifespan, the stakes beyond the prize pool were largely inconsequential to the casual sports fan. As recently as early last decade, the field mostly consisted of players at the bottom of the PGA Tour roster fighting to keep their spot.

That changed in 2013, however, when the tour officially made the Shriners Hospitals for Children Open part of its seasonlong FedEx Cup. And from a competitive standpoint, it’s been all the better for it.

This year, the local tournament lands as the fifth event of the PGA Tour season. The winner will earn 500 points toward being crowned 2021 PGA Tour champion next summer and will almost certainly sit among the top five in the standings after the victory.

It has star power.

The FedEx Cup standings incentive has significantly elevated the quality of the field on what seems like an annual basis.

Tournament organizers branded last year’s field as the best in the history of the event, with players like then-world No. 1-ranked Brooks Koepka and Phil Mickelson participating in 2019. This year’s list of players could be even better. Both of the past two major winners—Collin Morikawa and Bryson DeChambeau—are expected to play (the field will be finalized on October) for what might be the first time in tournament history.

The 27-year-old DeChambeau, who won the Shriners Open in 2018, prevailed in the U.S. Open in Mamaroneck, New York, by an impressive six strokes on September 20. He’s hitting the ball off the tee longer than anyone in golf history and is said to be redefining the game going forward.

Morikawa, who recently relocated to Las Vegas after graduating from UC Berkeley, won the PGA Championship in San Francisco in August at 23 years old. He currently sits sixth in the Official World Golf Rankings (DeChambeau is fifth), but could elevate to first once he has enough professional tournaments to qualify.

Morikawa won’t be the only Las Vegan in the field. The Shriners Open often feels like a reunion for local golfers, with area residents and UNLV graduates making up a large chunk of the players on the course.

One of the most well-respected local pros, Kevin Na, won the event last year for the second time. Na, who also claimed his first PGA Tour victory in the 2011 tournament, will look to join Jim Furyk as the only golfers to win Las Vegas’ event three times.

UNLV legend Ryan Moore is another recent champion; he won the Shriners Open in 2012 and often winds up in contention on a TPC Summerlin course he knows as well as Na does.

You can bet on it.

Golf and betting go hand in hand, and the sport has seen a surge in popularity at sportsbooks after it was one of the only options during coronavirus lockdown early this summer.

Look for a matchup bet between DeChambeau and Morikawa, but don’t play it unless one of them is offered at a plus price. They’re two of the best golfers in the world right now, and either is capable of running away with the win at TPC Summerlin.

Why an eight-game Mountain West schedule will benefit UNLV football