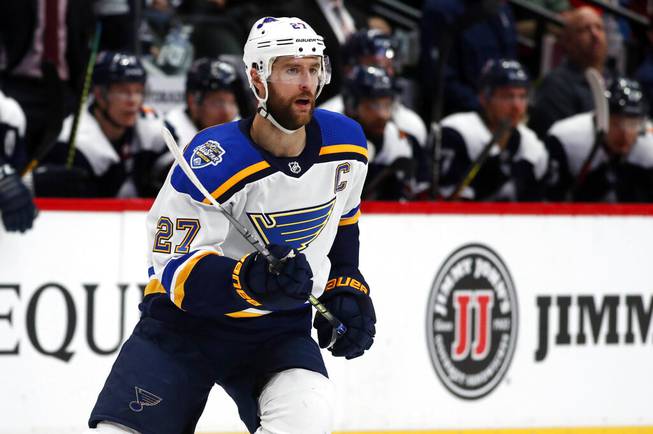 Analysis: Should the Golden Knights go after Alex Pietrangelo?

The Golden Knights have never been afraid to go hunting for the biggest prize on the market. They nabbed Mark Stone two seasons ago and Robin Lehner in February, not to mention Max Pacioretty right before the 2018 season kicked off.

All of those players came via trade. Outside of Paul Stastny in 2018, the Golden Knights have been quiet in free agency compared with their trade-market alter ego.

That could change this year, especially if the Golden Knights cast their line for the biggest fish on the market: defenseman Alex Pietrangelo.

There’s plenty of chatter when it comes to the St. Louis Blues captain and the Golden Knights. Sportsnet’s Elliotte Friedman said it on his 31 Thoughts Podcast, and the Athletic’s Pierre LeBrun said Vegas has “genuine interest.”

How would Pietrangelo fit in Vegas? Would it even be possible to squeeze him in under the salary cap? Let’s take a look.

What Pietrangelo would do for the Golden Knights

In short, Pietrangelo would be the certified No. 1 defenseman Vegas has never had. Shea Theodore may be molding into that player — he finished sixth in Norris Trophy voting this season — but Pietrangelo already is that player, has been for a decade, and figures to be for years to come.

He shoots right-handed, something none of Vegas’ top defensemen does (of their six regulars in the playoffs, only Zach Whitecloud is right-handed). Putting Pietrangelo on the right side of the top pair would allow the Golden Knights to move either Theodore or Nate Schmidt to their natural side, though both have shown a penchant for playing their off-side.

Pietrangelo finished fourth in Norris Trophy voting this season, his third top-five finish and seventh time in his career he received votes. He was named a second-team All-Star for the third time. His 16 goals tied for second among league defensemen and his 52 points were sixth.

He’s not just an offensive weapon either. Advanced metrics tabbed him as one of the best all-around defensemen and was a key member of the Blues’ penalty kill this season too.

Pietrangelo turns 31 in January, so there is some risk to signing him to a long-term deal. Few players have been as productive or durable to this point as Pietrangelo. In the last decade, he has never missed more than eight games in a season or averaged fewer than 0.5 points per game. He’s a workhorse, averaging more than 24 minutes per night each of the last nine seasons.

You’d be hard-pressed to find a top 10 list of NHL defensemen without Pietrangelo on it. Those types of players don’t become available often. There’s risk to signing any player to a long-term deal worth big dollars, but Pietrangelo is the type of player worth that risk.

What Pietrangelo would cost the Golden Knights

We’ll start with the money. The Blues’ latest offer to retain their captain is reported to be eight years at $8 million per year. If he’s turning that down to stay with the only organization he’s ever known, it’s clear he’s going to want more to leave.

Evolving-Hockey projects an eight-year deal for Pietrangelo to have an average annual value of $9.071 million and a seven-year deal to have a value of $8.326 million. If Vegas signed Pietrangelo as a free agent, its maximum offer could be for seven years. However, the Golden Knights could trade for his rights to keep him off the market, then extend him for eight seasons.

We don’t know what the final value will be, but for the sake of this story let’s say Pietrangelo signs a seven-year free-agent deal with Vegas at $9 million per year. That would make him the fourth highest-paid defenseman in the NHL, behind Erik Karlsson, Drew Doughty and Roman Josi, and tied with P.K. Subban.

That would also make him the second highest-paid Golden Knight, behind only Mark Stone’s $9.5 million cap hit. It would be a massive investment in a player who has already turned 30, but as detailed above, few players but him can claim to be worth it.

The Golden Knights would then need to clear cap space. According to Capfriendly, Vegas has just under $5 million in projected cap space dedicated to 18 players. That does not include unrestricted free agents Robin Lehner, Tomas Nosek, Deryk Engelland and Jon Merrill, or restricted free agents Chandler Stephenson and Nick Cousins.

The unrestricted free agents are easy. It’s unlikely Nosek, Engelland or Merrill return, and if they do it will be for close to the league minimum. Lehner is reportedly close to a five-year extension worth $5 million per season.

The restricted free agents are a little tougher to project, but Evolving-Hockey has Stephenson and Cousins combining for about $5 million combined.

If the Golden Knights sign Lehner, Stephenson and Cousins to new contracts totaling $10 million, then Pietrangelo for $9 million, that puts them $14.06 million over next year’s cap. That’s where the hard part begins.

Who the Golden Knights would have to move

The first name is Marc-Andre Fleury. If Vegas is going forward with Lehner as the starting goalie, Fleury’s $7 million cap hit is a luxury it can no longer afford.

The perfect scenario would be a trade in which the acquiring team takes on all of Fleury’s salary. That frees up $7 million, or about half the money Vegas would need to move. If the Golden Knights bought Fleury out, it would free up just short of $4.42 million. They could also retain salary in a trade to help facilitate a deal.

It’s possible they shed all of Fleury’s salary, but more likely they retain salary in a trade. Let’s say they retain $2 million, clearing $5 million off their books. If they replace Fleury with a minimum-salary goalie like Oscar Dansk, that would take up $700,000 and leave Vegas needing to move just shy of $10 million.

That’s where it gets tricky because there’s not another obvious trade chip, forcing the Golden Knights into tough decisions.

The first place to look is the blue line. Pietrangelo’s arrival would force one of the top-four out of a role, potentially making that player a luxury on the bottom pair. Theodore is the present and future and isn’t going anywhere. Brayden McNabb, the least-dynamic offensively of the foursome that includes Alec Martinez and Schmidt, also makes just $2.5 million against the cap. Martinez makes $4 million, but was just acquired by Vegas, which knew full well that Pietrangelo would be available this offseason.

That leaves Schmidt. His $5.95 million cap hit is not outrageous, but also makes up more than half of the cap space needed to sign Pietrangelo. They play the same position — right side of the top pair — and Pietrangelo would seamlessly slide into the role Schmidt plays on the ice. Schmidt has a 10-team no-trade list and has five years remaining on his deal, but is still valuable enough that Vegas would have no shortage of interest if it made him available.

If the Golden Knights move Schmidt, they would still be about $3 million above the salary cap. From there, one forward could do it. Paul Stastny makes $6 million in the final year of his deal, and shedding his salary would allow Vegas enough remaining room to recoup a roster player in any of their trades. Alex Tuch had a tremendous playoff, but Vegas could sell high and move his $4.75 million cap hit. Jonathan Marchessault had a poor playoff but would still fetch a decent return on his $5 million cap hit.

Here’s what a game-night roster could look like with Pietrangelo, minus Fleury, Schmidt and Stastny.

Those 20 players would leave Vegas with about $2.5 million in cap space for three reserves, or to improve other spots on the roster.

Pietrangelo is an elite defenseman who would instantly make the Golden Knights better, even if it meant subtracting from other parts of the roster. They wouldn’t even have to subtract simultaneously — NHL rules allow teams to go above the salary cap in the offseason.

Pietrangelo may not even hit free agency if the Blues get their wish and retain him. If he does reach free agency, Vegas won’t be the only suitor. The Panthers have shown interest as well as his hometown Maple Leafs.

If Pietrangelo becomes available, the Golden Knights should pounce at the opportunity to bring him in. It will require some working of the cap and moving players out of the organization, but if it’s to get to a player like Pietrangelo, all other concerns should be secondary.

Why an eight-game Mountain West schedule will benefit UNLV football