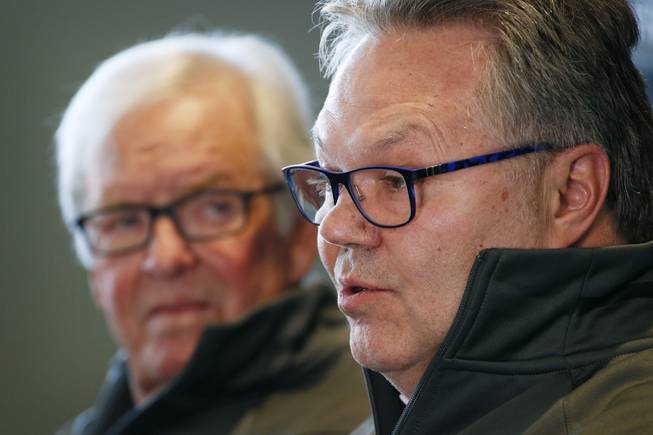 Owner Bill Foley’s estate in Montana was never supposed to be home base for the Golden Knights in the NHL draft, but that’s where they will be when the festivities begin this evening.

The draft was scheduled to be conducted in-person in Montreal in June, but as with everything hockey-related or otherwise, plans had to change because of the pandemic. It will be a virtual draft with each team’s front office spread across the continent and videoing in their selections.

The draft will begin with the first round at 4 p.m. and continue Wednesday with the second through seventh rounds. Instead of a frantic few hours on the floor of the Bell Centre, the Golden Knights and others will be in the confines of their own facilities.

“The draft is always really exciting and for the amateur scouting staffs that work incredibly hard over the course of the season, this is the biggest day of the year,” Vegas general manager Kelly McCrimmon said. “Good scouts are excited every time they’ve got a pick, and I sure believe our guys are ready for that.”

The Golden Knights have five picks this week, starting with the No. 29 pick in the first round tonight. They have two third-rounders, a sixth- and a seventh-rounder, and do not have a selection in the second, fourth or sixth rounds.

As for who the Golden Knights might select, that’s less clear. It’s worth noting there are two projected first-round picks from the Brandon Wheat Kings of the Western Hockey League: defenseman Braden Schneider and forward Ridly Greig. Until last month, McCrimmon owned Brandon and would be more familiar with those two prospects than most.

Keep an eye on that should either of those players fall to No. 29, although neither is expected to.

And while most of the Golden Knights’ top prospects are forwards, that doesn’t mean they will look to the blue line or the net. McCrimmon said Monday the team will not take positional need into account when making selections, instead going with the best player available.

“We’re going to just draft the best players we can draft every time we pick,” McCrimmon said. “That’s how we’ll always approach it. So with respect to how our prospect pool having influence on what we do Tuesday and Wednesday, there will be no connection.”

It’s a strategy that only makes sense. Unlike in football and basketball where drafted players, especially first-rounders, are often expected to make an immediate impact, few except the very top do in hockey. Just five of the 2019 first-rounders have made their NHL debuts, and only two beyond the first three picks.

Picking at No. 29, the Golden Knights are unlikely to secure a player who will make an immediate impact. They’ve also never selected this late in the draft after trading their first-rounder the year they went to the Stanley Cup Final and would have picked 30th.

The Golden Knights have made four first-round picks in their history, grabbing three in 2017 (Cody Glass, Erik Brannstrom and Nick Suzuki) and one last year (Peyton Krebs). Glass made his debut this season, as did Suzuki with the Canadiens. Brannstrom debuted in 2018-19 with Ottawa and Krebs has yet to make his debut.

Preparations were a little different, and the Golden Knights are looking to make the best of it. McCrimmon remarked that it will be nice to speak openly and watch video of prospects, something they wouldn’t be able to do on a normal draft floor with eyes and ears from other teams everywhere.

The COVID-19 pandemic scrapped some of the prime scouting opportunities from the calendar, like the Canadian Hockey League’s Memorial Cup, the NCAA’s Frozen Four and the scouting combine. Instead the Golden knights redoubled their efforts in breaking down existing film of players, as well as maintaining contact with prospects through video calls.

It also takes away what McCrimmon called the “buzz” on the draft floor, when two general managers meet up to talk with the possibility of a big trade about to go down. But McCrimmon also said most of the biggest conversations still happen over the phone, and the trade market could be robust this week.

“There’s going to be some aspects of drafting this way that are easier and more efficient, more productive perhaps,” McCrimmon said. “It will be interesting, to be honest, what level of activity there is (tonight). But I still think you’re going to see a number of trades over the course of the two days that take place.”

Video: These 7 plays have defined the Raiders’ season through four weeks