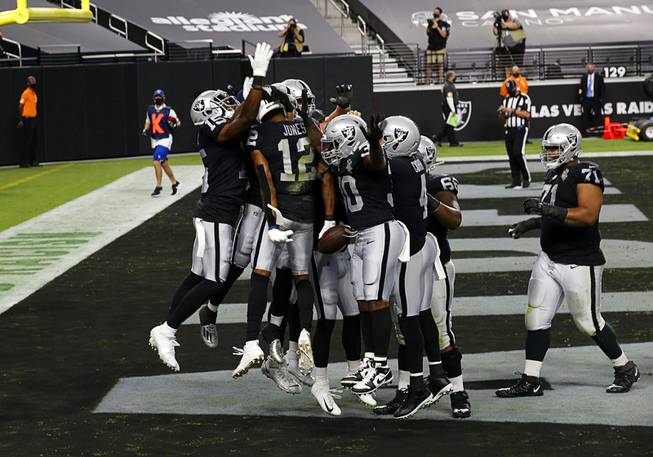 Las Vegas Raiders wide receiver Zay Jones (12) celebrates with teammates after scoring a touchdown in the first half during the Raiders’ first home game against the New Orleans Saints at Allegiant Stadium Monday, Sept. 21, 2020.

After two straight losses, the Raiders have wiped out a hot start and now sit squarely in the middle of the NFL’s pecking order through the first quarter of the season.

Can they rediscover the early magic that saw them win their first two games, or are they bound to be stuck in neutral all season? Let’s glance forward by looking back and reflect on the first four games in Las Vegas Raiders history by assigning superlatives in a number of categories.

Quarterbacks take the brunt of the blame for defeats, so many will consider this choice outrageous following a two-game losing streak. But the truth is, picking anyone else would be ridiculous. Carr has completed 73.6% of his passes for 1,095 yards and eight touchdowns with no interceptions. By any advanced metric grading overall performance, he has been a top-10 quarterback in the NFL this year. He became the Raiders’ all-time leader in touchdown passes in the Week 4 loss to the Buffalo Bills with the 151st of his career. Without Carr, the Raiders would be far worse off.

The sure-handed 6-foot-6, 225-pound Waller has probably been the best player on the field in the Raiders’ two games at Allegiant Stadium, but he’s been far less effective in a pair of road games. To take the next step and truly become one of the best players in the NFL—as the Raiders hype him to be—Waller needs to find a way to produce even when opposing defenses have centered game plans around stopping him.

Coach Jon Gruden wants to build the Raiders’ attack around the run game, And so far, it hasn’t been efficient enough to justify that approach. Star running back Josh Jacobs has only 300 yards on 83 carries, with no attempts having gone for more than 16 yards. The main problem would seem to be an offensive line ravaged by injuries; right tackle Trent Brown and left guard Richie Incognito have missed the majority of the season.

The precise connection from Carr to Jones along the sideline in the end zone kick-started a 24-0 Raiders run that secured the first victory in Allegiant Stadium history. Even if the rest of the season proves a disaster, the joy of winning the inaugural home game in Las Vegas by upsetting one of the NFL’s perennial powers will be remembered for years to come. Oh, and this touchdown might have produced the NFL’s best end zone celebration of the year, as Jones pretended to dispense hand sanitizer to his surrounding teammates.

The second-year defensive back took his lumps in Week 4 against one of the NFL’s best receivers—the Bills’ Stefon Diggs—but has otherwise been very solid. That’s more than can be said for almost every other defensive starter. The pass defense remains mediocre, but it has improved slightly from last year, and that’s almost entirely because of Mullen. The Clemson graduate relentlessly sticks to receivers and ranked first in the league in press man coverage by Pro Football Focus through three weeks.

It’s no coincidence that the two games in which the Raiders allowed the fewest yards and yards per play—Week 1 against Carolina and Week 4 against Buffalo—came when Kwiatkoski was in the lineup and not out with a pectoral injury. The other heralded offseason free agent acquisitions on the defense—defensive tackle Maliek Collins, linebacker Cory Littleton and defensive end Carl Nassib—have been disappointing but Kwiatkoski has lived up to his billing by directing the Raiders’ defense when he’s on the field.

The inconsistent Ferrell has failed to live up to his billing as the No. 4 overall draft pick two years ago, but he at least secured a win in the Las Vegas Raiders’ first-ever game. The Panthers tried to extend a potential game-winning drive inside the two-minute warning with a fullback dive, but Ferrell snuffed it out, came down the line and flattened ball-carrier Alex Armah.

The Raiders invested significant capital along the defensive front in each of the past two offseasons to create more pressure, but they have little to show for it. Opposing quarterbacks have torn them apart by virtue of having seemingly unlimited time in the pocket. Las Vegas sits 31st in the NFL in sack rate at 2.9%. Maxx Crosby, who has three of the team’s four sacks, is the only player on the roster who has provided any semblance of consistent pressure.

A liability a year ago, Carlson has become a strength this season. He has made nine of 10 field goals, including a trio of 54-yarders, and has yet to miss an extra point.

Carlson’s workload has been too large. Gruden has continually squandered points and win probability by sending the kicker out on fourth-and-short situations. Playing for three points once in scoring range has always been a losing long-term strategy, but in what has so far been the highest-scoring NFL season in history, the conservatism is even more damaging and less defensible.