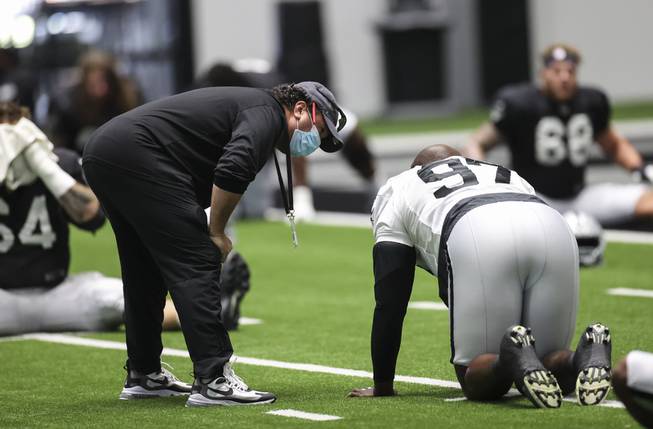 The Raiders defense is a problem. The team ranks near the bottom of the league in just about every key statistical category, and the eye test matches the numbers. For Sunday’s home game against Buffalo, defensive coordinator Paul Guenther was relocated from the sideline to a booth in the upper level of the stadium, but it didn’t make a difference as the Bills averaged 5.7 yards per play in a 30-23 win over the Raiders.

Though head coach Jon Gruden downplayed Guenther’s move, there is no doubt the pressure is mounting to do something. The team is 2-2 and a playoff push is not out of the question, but the defense looms as a fatal flaw and fans are already calling for a change to be made at coordinator.

Unfortunately for Las Vegas, the coaching is not the main issue on defense — it’s the players. And that’s not so easy to fix.

Against the Bills there were a number of opportunities for defenders to make something happen, but they too often failed to win 1-on-1 matchups, especially up front. For the game, Las Vegas registered one sack on 38 dropbacks, and even that one sack was a gift.

The film shows just how ugly the pass-rushing performance was.

On the opening drive of the game, the Bills faced a 3rd-and-9 near midfield. The Raiders rushed four defenders, and none of them were able to come close to pressuring the passer.

Former No. 4 overall pick Clelin Ferrell gets a 1-on-1 opportunity against the left guard and is completely stonewalled. Arden Key is equally swallowed up by the left tackle. Defensive tackle Maliek Collins and sophomore sack artist Maxx Crosby run a stunt and neither gains any traction. The result is a vast pocket for Josh Allen, and he delivers an easy strike for a 21-yard gain:

On this play, Ferrell lines up at defensive end and uses a speed rush against the left tackle; it does not go well. Crosby and defensive tackle Johnathan Hankins exchange rush lanes and Crosby again gets a 1-on-1 against the right guard; again, he can’t collapse the pocket (though he does tip the pass slightly).

Though the Raiders’ best pass rushers get favorable matchups, it’s another big pocket and easy first-down for Allen and the Bills:

For fans who want the coaches to “get creative” and blitz more, well, Guenther tried that.

Here, Guenther calls for hard-hitting safety Johnathan Abram to blitz through the “A” gap. Abram doesn’t get far, though, as the Bills center wipes him out of the play completely and Allen is able to step into another clean pocket to deliver a first-down pass:

Guenther called another DB blitz that could have worked out better.

On this play, cornerback Keisean Nixon blitzes from the slot and actually creates a pressure by bowling over the right guard and continuing on toward Allen. The problem is, Collins’ rush from the nose tackle position is so ineffective that he gets pancaked out of the play completely. Allen is able to scramble past his prone body and still deliver a flip pass for positive yardage:

If Collins had simply stayed on his feet and not been so thoroughly dominated in his 1-on-1 matchup, there would have been nowhere for Allen to go when Nixon brought the heat. It’s tough to blame Guenther for that.

Guenther tried a little zone blitz on this play, with slot corner Lamarcus Joyner rushing against the left guard while defensive end Carl Nassib drops into zone coverage on the tight end. The pass rush is stood up again, however, and Allen is able to target Nassib in coverage to move the chains:

On that play, note Ferrell’s “speed rush” against the left tackle. That’s not a coaching issue, that’s just a top draft pick who has very little burst or explosiveness out of his stance. Ferrell is an easy block right now, and if there’s a criticism to levy at Guenther it’s that he should stop asking Ferrell to rush from the outside. He’s not capable of it, and lining him up there is putting him in a position where he can only fail.

The Raiders’ only sack on the day came when Allen held the ball for an eternity on a 3rd-and-18 play, so it’s hard to credit the defense for that. And even the one silver lining for Las Vegas came attached with some retroactive bad news.

The team’s one good pass-rushing rep of the game was this play, as defensive tackle Maurice Hurst was able to cross lanes with Key and bring fast pressure right up the middle:

Hurst showed a nice change-of-direction on that play to explode through traffic, so of course he tested positive for COVID-19 and was put on IR on Tuesday.

Is there more Guenther could be doing to generate some semblance of a pass rush? Maybe. He doesn’t call many big blitzes, with six or seven rushers attacking the pocket, but that’s probably because the Raiders are so young in the secondary; asking rookie cornerbacks and safeties to defend on an island more than once or twice a game is just asking to give up a big play.

Other than that, these are personnel issues. A No. 4 overall pick has to win some of his individual matchups. A 10-sack edge rusher has to be able to beat a guard. The “key to the defense” can’t be getting pancaked on a weekly basis. And so on.

It’s not an easy fix, and swapping in a new defensive coordinator is unlikely to radically alter the talent level of the players on the field overnight. Improvement will have to be gradual, and considering there was no preseason, it’s probably fair to expect the defense to get better as they see more live-action reps.

Guenther, Gruden and the rest of the coaching staff will have to continue preaching fundamentals and hope the pass rush finds its footing, or there may be no saving this defense in 2020.

College football by the odds: Vegas picks and preview of every Week 6 game