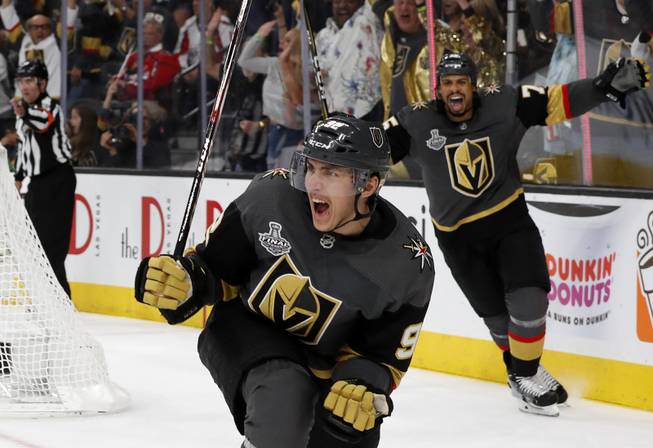 Vegas Golden Knights left wing Tomas Nosek (92) celebrates his goal in the third period during Game 1 of the NHL Stanley Cup Finals at T-Mobile Arena Monday, May 28, 2018. Ryan Reaves (75) is at right.

The Golden Knights were quiet once free agency began Friday morning, but that doesn’t mean something isn’t brewing.

The Golden Knights did not sign anyone new, bringing back Tomas Nosek on a one-year deal, but multiple reports have them still in the running for star defenseman Alex Pietrangelo. The former St. Louis captain is thought to be deciding among a small group of teams, Vegas included.

The suitors for Pietrangelo dwindled as the day went on, leaving the Golden Knights in pole position for the defenseman’s services. The Blues signed defenseman Torey Krug, seemingly closing the door on their captain’s return. Pietrangelo’s hometown Maple Leafs signed defenseman T.J. Brodie, eating into what little cap space they had.

General manager Kelly McCrimmon declined to comment about Pietrangelo on Friday night. The fact remains, though, that there were a small number of teams rumored to be interested in Pietrangelo before free agency began and that list shrunk considerably in Vegas’ favor.

“I’m not going to speculate on other players that aren’t part of our organization,” McCrimmon said. “I don’t think that’s fair to anyone.”

The morning’s first transaction was an indicator the Golden Knights were looking to clearing cap space for a big move. They sent center Paul Stastny and his $6.5 million cap hit to Winnipeg in exchange for a 2022 fourth-round pick and 25-year-old defenseman Carl Dahlberg. It’s not a move that makes the team better, but one that was necessary because of its cap constraints.

Vegas also has trade chips in Marc-Andre Fleury, whose $7 million cap hit is a luxury after the Robin Lehner extension, and Nate Schmidt, who along with his $5.95 million cap hit could be expendable if Pietrangelo comes to town. Those two, along with Max Pacioretty ($7 million cap hit) have been discussed in trade talks, according to a Sportsnet report.

The Golden Knights are currently under the salary cap, according to CapFriendly, with a roster of 21 players. They could enter the season with the roster as is or add and subtract more contracts. McCrimmon said either is a possibility.

“I don’t think you’re ever going to stop looking at ways to improve,” he said. “We’ll continue to see what the possibilities are.”

Vegas did lose two players to other teams: Defenseman Jon Merrill, who played 140 games in three years with the Golden Knights, signed a one-year, $900,000 deal with Detroit; Nick Cousins, who played 24 games after coming over in a trade-deadline move, signed a two-year, $1.5 million per-year contract with Nashville.

The Nosek contract, reported to be worth $1.25 million, is a slight bump from the $1 million he made last season. After Stastny and Cousins left, the Golden Knights were thin down the middle, and the 28-year-old forward, who was an original Golden Knight, helps solidify the fourth line and the penalty kill. Nosek joins William Karlsson, Chandler Stephenson, Nicolas Roy and Cody Class as options at center.

“I think we’ve got good center depth and that played a part in the decision with Paul,” McCrimmon said. “Internally we feel that there’s some people that are ready for more responsibilities and bigger opportunities.”

McCrimmon also said Deryk Engelland, who has been a pillar of the Golden Knights on and off the ice since the expansion draft, is unlikely to return after three seasons.

With starters back, Raiders equipped for shootout at Kansas City

What we know about the UNLV basketball schedule so far