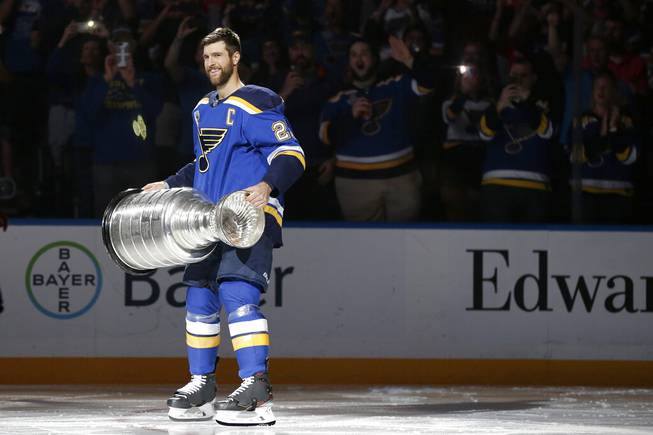 How Golden Knights continue to draw stars like Pietrangelo

In this Oct. 2, 2019, photo, St. Louis Blues captain Alex Pietrangelo lifts the Stanley Cup during a ceremony honoring the Blues championship victory before the start of an NHL hockey game against the Washington Capitals in St. Louis.

Sometimes it’s hard to forget the Golden Knights have played just three NHL seasons. They’ve been to the Western Conference Final twice and have reeled in the kind of star power even long-established franchises can only dream of.

It was Marc-Andre Fleury at the expansion draft. It was Mark Stone at the 2019 trade deadline. It was James Neal, Paul Stastny, Max Pacioretty and Robin Lehner coming in to bring credibility to the sport’s youngest organization and made Vegas a legitimate Stanley Cup contender year after year.

It made Alex Pietrangelo want to be the next star import for the Golden Knights.

“I wanted to commit to something and these guys are all committed to the city.”

Pietrangelo is committed, with a seven-year, $8.8 million per year contract with the Golden Knights. That term is matched only by Stone and William Karlsson, and Stone is the only other player with a no-move clause in his contract and the only one with a bigger cap hit than Pietrangelo ($9.5 million).

Stone is the perfect parallel to Pietrangelo. At the time of the Stone trade in February 2019, then-general manager George McPhee called Stone “the here, the now, the future.” He said a lot of players like him sign extensions and play their entire careers with one club.

So when the Golden Knights could trade for him they did — giving up not only a high pick and prized prospect Erik Brannstrom, but also trading Colin Miller, Erik Haula and Nikita Gusev in the offseason to make the money work. Since Stone became a Golden Knight, only Pacioretty has scored as many regular season points as him, and no one has more postseason points.

“When we put Mark Stone on our team, in my mind, we became a contender that day,” general manager Kelly McCrimmon said. “And I think with Alex, it’s a real upgrade to our hockey team, I think a really important add that is going to make us a much better team.”

Vegas is hoping Pietrangelo has a similar impact. The team has had strong defensemen before, but none of the two-way caliber Pietrangelo is and has been for a decade. He can shut down the opposition’s best forwards while still generating offense. He can run a power play or kill a penalty.

Frankly he does it all. And like they did with Stone, the Golden Knights saw the potential to get a game-breaking talent and did everything it took to get him — even if it meant trading Stastny and Nate Schmidt.

“Good players expect you to try to improve your team as much as you possibly can, and I think the guys that are here know that we’re trying to win a Stanley Cup,” McCrimmon said. “We’re not going to apologize for that. We’re going to continue to work as hard as we can to be the best team that we can be.”

That’s the cost of star power though. Some teams are able to build through the draft and develop their own players they can sign to cheaper contracts. The Golden Knights are starting to do that, as Cody Glass and Zach Whitecloud are among the homegrown players expected to contribute in a big way next season.

Stars also want to win, another thing that has been so attractive about the Golden Knights: that they didn’t want to wait for those players to develop before chasing a championship. The expansion draft helped net them name-brand players, but they’ve taken off running since then.

Pietrangelo is just the latest example of the Golden Knights’ aggressive modus operandi when it comes to getting the league’s best players, and putting them on a team that everyone believes can win it all.

“When you start off as well as the franchise has in the first couple years, you expect a winning environment and you want to be a part of that winning environment,” Pietrangelo said. “When you’ve gotten so close, you realize how hard it is to win and it’s a process and I think guys are committed to that. They want that opportunity, and it’s exciting to be a part of that group that feels that same passion.”

Voice of ‘Los Malosos’ living out a Raiders fan’s dream