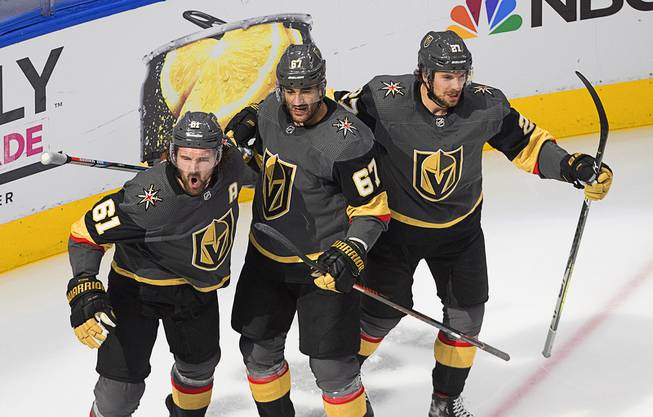 We don’t know when the Golden Knights will next play a game. But it’s never too early to start looking at how they could line up when they do.

The Golden Knights made plenty of moves this offseason, including the marquee signing of defenseman Alex Pietrangelo. It came at a cost, though, as Vegas traded Paul Stastny and Nate Schmidt to clear cap space, and also did not re-sign free agents Nick Cousins, Jon Merrill or Deryk Engelland.

All this means a new Vegas roster for 2020-21, whenever the season begins. Most of it will look similar, but there will be some major differences to next year’s squad.

It’s worth noting that Vegas is over the salary cap by about $974,000, according to CapFriendly. There are no obvious moves like keeping a player down in the minors, but the Golden Knights have utilized injured reserve in the past to remain under the cap ceiling.

“We’ll be cap-compliant on opening day as we were one year ago and as you have to be to play in the National Hockey League,” Golden Knights general manager Kelly McCrimmon said.

Here’s a projection of what a 20-man lineup will look like on opening night.

Who plays center and with whom will be the thing to watch.

Karlsson is the undisputed No. 1 center for the Golden Knights, and the only center who is a proven top-six forward. Stephenson looked the part for much of last year but does not have experience beyond that, and the Golden Knights have high hopes for Glass, who showed flashes of potential last year but didn’t claim a stranglehold on a top-six job before an injury ended his season.

If Karlsson plays with Pacioretty and Stone as he did often during the playoffs, it sets up Glass with an inside track at the second-line center job. Remember he started there last season, making his NHL debut on opening night between Pacioretty and Stone.

If coach Peter DeBoer wants to reunite the Marchessault-Karlsson-Smith line, Glass could still play as center No. 2, but Stephenson could take that role as well, thriving as the Pacioretty-Stone center during the regular season and at times in the playoffs.

Tuch remains Vegas’ secret weapon on the third line. His production has dipped in the regular season since Stone’s arrival in February 2019, subsequently pushing Tuch to the third line, but he found a new gear in playoffs, leading the team with eight goals. If he can carry that postseason groove into the regular season alongside Roy and either Stephenson or Glass, he could return to the 52-point pace he rode in 2018-19.

The fourth line has no ambiguity at all. That trio was a staple all season as Nosek found a home between Vegas’ modern-day version of the Bash Brothers. Carrier and Reaves are going to do their thing, putting up hit totals near the league lead while chipping in some offense along the way. Nosek is a reliable defensive presence who kills penalties and wins faceoffs (53% for his career).

There isn’t a lot of leeway for the Golden Knights to stray from these 12 forwards. Of the group, only Glass can be sent to the AHL without being exposed to waivers, and it’s unlikely Vegas would opt for him playing in Henderson. Expect all of them to be on the opening night roster.

The Golden Knights do have plenty of depth, though, even if most of it is still unproven. Jack Dugan and Jake Leschyshyn will be battling to make their NHL debuts this year, and Patrick Brown, Gage Quinney, Keegan Kolesar and others should see time with the Golden Knights as well.

Perhaps the Golden Knights want to break camp with 2019 first-rounder Peyton Krebs, who can play up to nine games without burning a season of his entry-level contract. While possible, that option is unlikely.

It’s almost the same six who played in the playoffs, with the glaring change of Pietrangelo in for Nate Schmidt. That change, though, can help turn a good top pair into one of the best in the league.

For parts of three seasons, Vegas has used McNabb and Schmidt as the top defensive option, matching them with the opposition’s best forwards. It worked well, and Pietrangelo should slide in seamlessly next to defensively sound McNabb to become a menace for opposing scoring and puck possession.

Putting McNabb and Pietrangelo together to defend top lines also allows Theodore to continue to feast on lower-lineup players. It worked in the playoffs, where the Golden Knights did not use Theodore as a shutdown option, instead letting him run wild offensively and rack up a team-best 19 points in 20 games.

Pietrangelo could even pair with Theodore, creating the type of duo that fans dream of. The Golden Knights, though, have raved about how Martinez boosted Theodore’s game to a new level in the playoffs, and keeping Pietrangelo and Theodore on different pairings would mean that half or more of the game’s 5-on-5 time would feature one of Vegas’ star defensemen on the ice. That’s hard to game-plan against.

As for the third pair, Holden and Whitecloud were terrific in the playoffs, albeit against teams’ lower-lineup forwards. The duo spent more than 200 minutes together at 5-on-5 and helped Vegas control 62.9% of the shot attempts and 59.8% of the expected goals. They didn’t blow the doors off anyone, but Holden and Whitecloud continued a three-year tradition of Vegas bottom-pair defensemen outplaying teams’ third and fourth lines.

As for defensive depth, the Golden Knights have a few options. Carl Dahlstrom, who was acquired from Winnipeg in the Stastny trade, figures to be on the opening night roster because he is not waivers-exempt. Vegas could also turn to Nicolas Hague and Dylan Coghlan, both of whom were in Edmonton for the playoffs, as well as Jake Bischoff and Jimmy Schuldt, who both have NHL experience, even if it’s a combined five games.

It was expected coming into the offseason that the Golden Knights would look to move Fleury. The postseason’s unofficial coronation of Lehner as the starter and his ensuing extension, Fleury’s $7 million cap hit and the famous photo Fleury’s agent posted all suggest the popular netminder was on his way out.

Instead, Vegas either couldn’t or wouldn’t trade Fleury, and will head into next season with one of the NHL’s best goaltending duos. Whether committing $12 million of the cap to the goaltending position is the best allocation of resources (only Montreal has more cap space dedicated to goalies), that’s what Vegas is going with.

Despite the cap concerns, having two starting-caliber goalies is not a bad thing. It will likely be a shortened, condensed season with plenty of games on back-to-back nights. Being able to start Lehner on a Tuesday, Fleury on a Thursday then go back to Lehner on Friday is an indulgence Vegas has that most teams won’t. Fleury will no longer be looked at as the starter with little safety net as in years past, and lightening his workload could help reinvigorate him after a season that was statistically his worst in a decade.

And it’s a good thing the Golden Knights have two options at the NHL level because below that, they are thin on goalie depth with NHL experience. Of the four goalies in the professional system, only Oscar Dansk has experience in the NHL on a non-emergency basis (Dylan Ferguson played one game in 2017), and he has only appeared in five games.