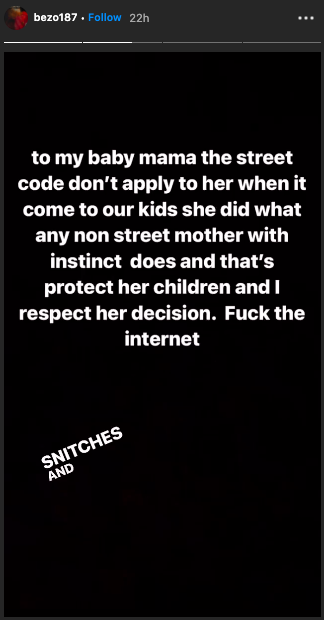 The alleged victim’s girlfriend confirms that she filed the report against NBA Youngboy.

It’s only been a few days since NBA Youngboy released the crew compilation, Never Broke Again Vol. 1 (Ain’t Too Long 2) but they found themselves making headlines after it was reported that they were under investigation for an assault. A man in Texas was allegedly beaten down in a garage out of a studio. The victim was allegedly pistol-whipped and brutally kicked and punched.

Snitching allegations began weighing on the alleged victim, who goes by the name Bezo187, after audio and TMZ reports suggested that he had told the police about the incident. The tabloid publication even said that the victim was the one who spoke to the cops about the incident when filing the report.

“I ain’t rat or talk,” Bezo wrote. “Whoever spoke to the police is somebody close to me I told or somebody close to them told what happen. That’s why y’all favorite rapper ain’t in jail. It’s say investigation meaning they don’t have shit and trynna figure out what really happen which I ain’t telling. and on top of that I told the doctor I was in a car wreck they stitched me up and sent me home.”

After being released, Bezo explained that he had gone into a coma and woke up five days later to news of the investigation. “Somebody getting paid off TMZ. It’s always a mutha****** you think you can trust gone try to make it bout they self. I even woke up to [GoFundMe] accounts with my faces on them,” he added.

Turns out the person that told was his girlfriend. She took to Instagram where she confirmed that she gave the statement to the police. “My n**** was dead for 5 days!! I been gave the statement the day my dude went into a fucking coma yall really be on dick hard like a mf,” she wrote in a comment as more people pounced on Bezo.

“To my baby mama the street code don’t apply to her when it comes to our kids,” he said, adding that she’s a civilian. “She did what any non street mother with instinct does and that’s protect her children,” he continued. “I respect her decision. Fuck the internet,” he concluded as Morgan Freeman’s “Snitches and Rats” interlude on 21 Savage and Metro Boomin‘s Savage Mode II played out on his IG Story.