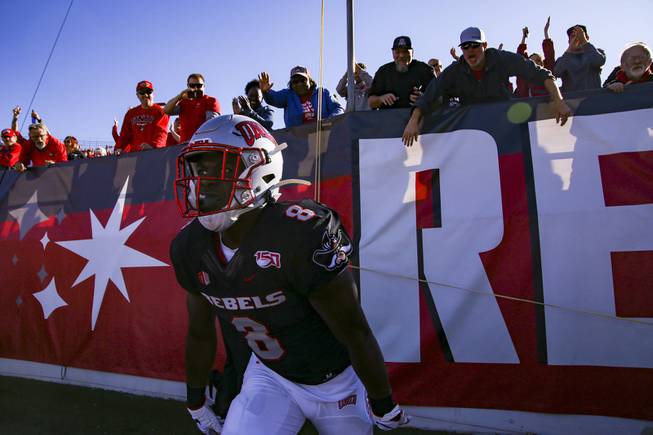 Rebel fans cheer for Charles Williams (8) after he scores a touchdown during a game against the San Jose Spartans at Sam Boyd Stadium, Saturday, Nov. 23, 2019.

UNLV has a big opportunity to change the narrative of its 2020 season today.

Week 1 went poorly, as anemic offense, shoddy tackling and uncertain coaching decisions all contributed to a 34-6 blowout loss at San Diego State. But a win today would erase most of that from the minds of UNLV fans and set the team on a new course for the rest of the season.

UNLV has won the Fremont Cannon two years in a row, and nothing would bolster the credibility of Marcus Arroyo more than claiming his first win over rival UNR. Doing it in the first game at Allegiant Stadium, with fans in the stands (even if it’s just 2,000 people) would rejuvenate some of that “new coach” excitement around the program and give Arroyo a lot of leeway over the final six games.

Arroyo downplayed the importance of the contest earlier in the week, but it’s safe to say that beginning his tenure with an 0-2 start and a loss to the big in-state rival would not exactly be ideal.

What can UNLV do in order to keep the cannon? A few keys to watch:

Gilliam gets the nod

UNLV rotated three quarterbacks in its season-opening loss at San Diego State last week, and none of them performed well. But senior Max Gilliam led the offense on its only scoring drive, and so Arroyo will lean on him against UNR.

Gilliam is listed as the starter in this week’s depth chart after being a “co-starter” along with sophomores Kenyon Oblad and Justin Rogers in Week 1. Oblad and Rogers may see snaps, but it looks like the cannon will be Gilliam’s to win or lose.

In Week 1, Gilliam completed 13 of 21 passes for 105 yards and one touchdown, and while he threw two passes that could have been intercepted he was able to escape without a turnover.

Senior running back Charles Williams said the team has confidence in Gilliam as well as the team’s entire stable of QBs.

Speaking of Williams, the fifth-year senior is probably going to be UNLV’s sharpest weapon against UNR. In last year’s cannon game, Williams carried 20 times for 138 yards and scored a touchdown in UNLV’s overtime win. It might take another heroic effort from the 5-foot-9 bruiser in order to give the scarlet and gray a chance today.

Arroyo will have to commit to keeping Williams involved. UNLV did not do that last week at San Diego State, as Williams received just four carries in the first half; the result was a disjointed, pass-oriented offense without a quarterback and a 27-0 deficit at halftime.

Arroyo corrected the game plan in the second half and began feeding Williams, who finished with 20 carries. The final stat line was pedestrian (80 yards, no touchdowns), but it was important to get Williams into a rhythm; he is UNLV’s best player and he should receive another 20 carries (or more) against UNR. It will be up to Arroyo to make sure Williams is a factor while the game is still within reach and not just during garbage time.

“I felt like me getting going, it got the team going, too,” Williams said of his first- and second-half splits in Week 1. “As a leader and a key player on this team I feel like I’ve got to get the team going in the first half, and that’s on me. The slow start was on me, honestly. I don’t we’ll have that problem this week.”

UNR went pass-happy in its season-opening win against Wyoming, with quarterback Carson Strong completing 39 of 52 passes for 420 yards and four touchdowns. The bulk of his passes were aimed at receiver Romeo Doubs (12 catches, 117 yards, one touchdown) and tight end/receiver Cole Turner (seven catches, 119 yards, two touchdowns).

Doubs and Turner are a dangerous duo, and at 6-foot-2 and 6-foot-6, respectively, they are tough matchups for defensive backs. The good news is that UNLV’s starting cornerbacks are 6-foot Nohl Williams and 6-foot-3 Sir Oliver Everett; the bad news is that both are freshman.

Williams and Everett did a nice job against San Diego State, but the Aztecs are a ground-and-pound team. UNR will let it fly today, and there will be tremendous pressure on the secondary to keep up.