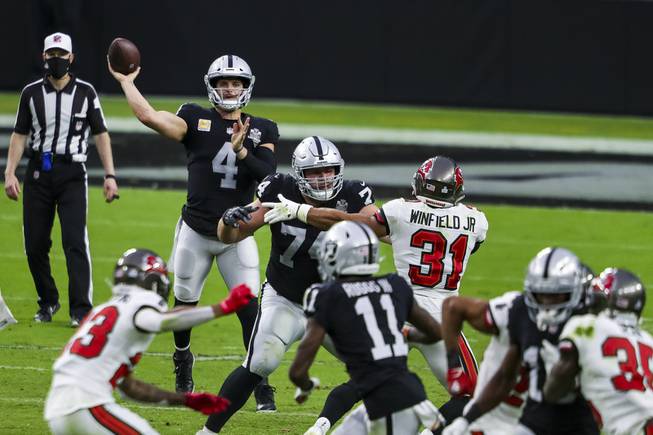 With only one playoff appearance in the past 15 years between the two of them, the Raiders and Browns are currently two of the most downtrodden franchises in football. But they’ve both shown reason to believe that’s changing this year. Having beaten every team on its schedule aside from divisional rivals/Super Bowl contenders Baltimore and Pittsburgh, Cleveland is currently slated for a wild-card spot in the AFC playoffs. Las Vegas is only one game out of the postseason picture itself after losing to Tampa Bay last week to fall to .500 on the year. This game therefore carries real stakes — a rarity in this series recently. That doesn’t mean the games haven’t been entertaining, as four of the past five meetings between the Raiders and Browns have been decided by a touchdown or less.This looks like another close one.

• Where: FirstEnergy Stadium in Cleveland, Ohio

Games involving the Browns and Raiders have averaged 61 points this season — about 11 more than the NFL average. So why then has the over/under betting total plummeted from as high as 55.5 points to as low as 50.5 points in local sports books? It’s all because of the weather conditions, or more specifically, the calls for strong wind. The FirstEnergy Stadium forecast predicts 28 mph wind, an element statistically proven to stifle scoring and passing games. Both teams will have to deal with the windy and possibly rainy weather, but there’s reason to believe it could affect Cleveland more detrimentally. That’s because its passing attack is more centered on throwing vertically, while the Raiders generally focus more on short routes near the line of scrimmage. Browns quarterback Baker Mayfield’s average depth of target is two yards longer than Raiders quarterback Derek Carr’s. The wind will likely cause more changes to the home team’s approach.

Raiders coach Jon Gruden has promised some changes along the defensive line in an attempt to generate more pressure. It’s a necessity but Las Vegas will need to implement any changes carefully, without disturbing its run-stuffing ability. Running the ball is what the Browns have done best this season. They were even better before losing starter Nick Chubb to injury after four games but still rank fourth in the NFL in yards per carry, at 5.1. Hunt has been the go-to in Chubb’s absence and emerged as a particular threat in the red zone, where Cleveland has utilized his pass-catching ability out of the backfield. He leads the Browns with seven total touchdowns — four receiving, three rushing — and has a plus matchup against the Raiders on the surface. Las Vegas rates 24th in the NFL in giving up 4.6 yards per carry.

• “I wouldn’t say I put it behind me because I was embarrassed. It was very embarrassing of me.” — Running back Josh Jacobs on last week’s performance, when he rushed for 17 yards on 10 carries

• “We spent a number of periods with what we call a wet ball, where we have the managers, the guys that are spotting the ball, they squirt water on the football.” —Offensive coordinator Greg Olson on how the Raiders prepared for bad weather

• “Social media stuff? Honestly, I don’t have social media. I don’t look at it. I don’t have time to pay attention to it.” — Defensive coordinator Paul Guenther on coming under fire for the defense’s struggles

• “Reality and speculation are two different things. We’re going to continue to develop our players. I’m not saying a trade is out of the question, but some of the trades I’ve seen thrown out there are a bit unrealistic.” — Coach Jon Gruden on if the Raiders will make a move before Tuesday’s trade deadline

Many have speculated that the defensive line changes will entail seeing more of Hurst, the third-year tackle out of Michigan. Hurst missed the game against the Chiefs three weeks ago after being added to the COVID-19 list, but when he’s been active, he’s been the Raiders’ best interior lineman by a wide margin. He’s tied for the team lead, alongside edge rusher Maxx Crosby, with five quarterback hits. Hurst grades out well from an advanced perspective too, as Pro Football Focus rated him as one of the five best interior rushers through the first quarter of the season. He was the only player to register a single pressure on Buccaneers quarterback Tom Brady last week. Getting to Mayfield is a must, as he’s completing only 41.3% of passes when under pressure as opposed to 63.1% overall. Hurst has yet to make a start this season, and only once played more than 50% of the Raiders’ defensive snaps, but he might be their best bet to bother Mayfield.

Among 37 NFL players with at least 50 rushing attempts, Josh Jacobs ranks second-to-last at 3.4 yards per carry. Whether the decline in the second-year back’s efficiency is due to his own troubles or what’s often been a makeshift offensive line, the Raiders need him to snap out of it immediately. Gruden would still prefer to be a run-first team, but that hasn’t been possible when Jacobs has continually gotten stuffed to put Las Vegas behind schedule in picking up first downs. Jacobs’ longest run of the year is 15 yards, and the lack of big plays in the run game is what Gruden identified as his biggest offensive concern. He expressed confidence that Jacobs was close to breaking one, and the chances should be there against a mediocre Cleveland rush defense.

The Browns lost top receiver Odell Beckham Jr. to a season-ending knee injury last week. There’s always a kneejerk reaction to assign a star receiver’s production to the next biggest name at his position when he goes out, but it rarely works out that way. In other words, just because Beckham is gone, that doesn’t mean Landry is going to get more targets. The Raiders have also defended the slot, where Landry lines up the vast majority of the time, better than any other receiving group this season, according to Football Outsiders’ DVOA ratings. Landry has only gone over this number in two of seven games this season, and between missing Beckham and the weather, the Browns’ passing game might not be at its best against the Raiders.