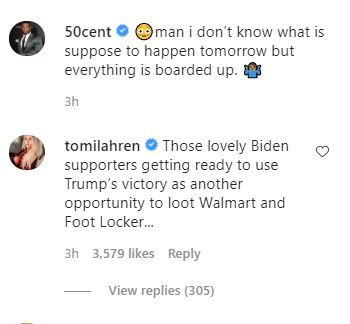 America’s 2020 presidential election has been a wild ride. Throughout the year, celebrities have stepped forward to publicly share who they support in this election, and some revelations have surprised the public. Lil Wayne recently shared a photo of himself with Donald Trump as the rapper seemed to have placed his eggs in the President’s basket, while Eminem made a rare move and licensed the music to his hit song “Lose Yourself” for former Vice President Joe Biden’s political ad.

Both rappers are friends of 50 Cent, but even so, Fif never passes up an opportunity to take a few playful jabs at his famous friends. The media mogul shared a meme that showed a White man with a Black Lives Matter sign standing as opposed to a Black man holding a Confederate flag. “Wayne Vs. Eminem,” Fif wrote in the caption with a crying laughing emoji.

In another Instagram post, 50 Cent shared the news about Eminem’s Biden ad and wrote in the caption that he isn’t sure what will go down on election day, but he’s noticed that cities have boarded up their stores. Far-right wing conservative commentator Tomi Lahren couldn’t pass up the opportunity to condemn liberals and Biden voters when she commented on the Power producer’s post.

“Those lovely Biden supporters getting ready to use Trump’s victory as another opportunity to loot Walmart and Foot Locker,” she wrote. Lahren was inundated with scathing responses, but she didn’t seem to pay them any mind. Check out a few of Fif’s posts below.